Ring of Honor has come to a very important time for their company’s future. Yesterday, I broke down the problems ROH has with developing talent, especially with WWE/NXT’s change in talent acquisition strategy, which may involve signing top current and future ROH wrestlers. In short, if ROH is going to rely on essentially homegrown talent, they have to turn some of those guys into stars. The necessary way to do that is to use their television to build hot pay-per-view matches, which can catapult wrestlers into draws. I’ve discussed ad nauseum ROH’s failure to use their television to build PPV matches. So how are they going to create the wrestlers that people want to pay to see? We are going to see whether ROH changes the direction they have been taking with their TV or if they wither on the vine as the old guard moves on and newer members of the roster require real work to fill that void.

Ring of Honor’s next big show is Field of Honor, which is running in the same area and on the same night as the NXT Takeover show in Brooklyn. Social media has not been kind to ROH’s rollout of the card for that show, especially considering the huge competition they now face. I’m not going to criticize any of the build to that show in this column. The show will mainly use NJPW talent and doesn’t seem to be built around matches that are important to the storylines of the promotion.

As for this particular episode, it started with a Roderick Strong promo. Roderick reminded Jay Lethal that he and the champ went toe-to-toe for 60 minutes and Lethal couldn’t beat him. As a result, he demanded a rematch. Roderick plays into that ROH vs. NXT angle because he is part of that old guard and just re-signed with Ring of Honor. He is hot right now but clearly isn’t the guy to carry the promotion into the future. My hope is ROH will find a way to use Strong’s momentum to put over young guys in their necessary quest to build young talent.

War Machine vs. The Young Bucks

If you are tired of the style of matches The Young Bucks generally have, this was a breath of fresh air. I love basically all Young Bucks matches but I was still intrigued by this matchup. We don’t get a lot of Bucks matches against big guys. Much of their work is in New Japan, where they only wrestle other juniors teams and their contests on the American indie scene are largely car crash types with other spotty wrestlers. And I say all that with love. This promised to be something totally different.

Unfortunately, it did not deliver what I was looking for. War Machine is best in more fast-paced matches where they can use their power but also show off their speed and agility for their size. Here, Hanson & Rowe mostly controlled the match with Matt-o playing Ricky Morton while Nick sold a phantom leg injury on the outside. Matt’s suffering eventually drew out the leader of the Bullet club, AJ Styles, and some shenanigans led to AJ getting the pinfall in a match of which he was not a part. The AJ part was kind of fun but, shockingly to me, this was largely skippable.

War Machine aren’t the perfect example of who I would build a promotion around but they are good performers whom ROH could build, especially Ray Rowe. Rowe is fairly charismatic, is a good worker, and has a good look. With the right push, I could easily see him in the main event picture. **1/2

Adam Cole cut a promo regarding his issues with The Kingdom and his main event match tonight against Kyle O’Reilly. Cole affirmed his loyalty to The Kingdom but cut what was essentially a babyface promo about how much he and O’Reilly respect each other. A Cole/O’Reilly matchup really creates a lot of booking issues. As I will talk about later in this review, O’Reilly is viewed as a very credible challenger to Jay Lethal’s title and Adam Cole is a recent former champion who has just returned from injury, appears to be getting a babyface push, and should certainly be in line to get some momentum-building wins on the way to a title shot.

Cedric further cemented his heel turn at Death Before Dishonor, where he pinned Moose after again hitting him with a wrench. I think the Alexander heel turn has life; I’m glad to see it getting time and opportunity. However, I wouldn’t have paired him with Moose because I would push Moose to the moon.  There is the possibility that ROH isn’t as high on Moose as I am but I’m not yet convinced of that. Regardless, this was obviously a fairly quick squash. *1/4

Speaking of Moose, my man came out after the match when Veda Scott commanded Cedric to take off Romantic Touch’s mask. That attempt brought Caprice Coleman off of commentary to confront Alexander. When Alexander pushed Coleman, Moose cleared the ring. After getting pinned twice by Cedric, Moose is presumably in line to get his win back the next time these two face off.

Roderick Strong’s earlier demand required a response so Jay Lethal cut a video promo to address Roddy. Lethal declined and told Strong he had to go to the back of the line. Truth Martini singled out Kyle O’Reilly and Hanson as the next challengers.

And to piggy back on that, Mandy Leon’s Inside ROH segment revolved around Kyle O’Reilly submitting Jay Lethal at a house show, which led to O’Reilly’s shot at Lethal’s ROH World Television Championship. Of course, O’Reilly wrestled Lethal to a 30-minute draw.

I’ve faced criticism of late that I left out O’Reilly when I discussed the most likely person to take Jay Lethal’s World Championship. That criticism is fair. My defense has been that O’Reilly just wasn’t presented by ROH as a top singles competitor to that point. The submission victory O’Reilly gained was as a direct result of Jay Briscoe interference. That incident occurred in the middle of the build up to Lethal/Briscoe at Best in the World. While the TV title draw was clean, the aftermath was again used to build to that world championship match. Perhaps I didn’t give ROH enough credit for their ability to juggle several stories among similar competitors. Clearly, O’Reilly is on his way to a title shot and many people think he’s the next champion. While I’m not sure O’Reilly has the it factor to carry Ring of Honor, I could not blame them for using the Briscoe/Lethal heat to really put over a young guy with a lot of potential like Kyle O’Reilly. Of the entire roster, he may be the best choice of anyone who is ready right now. So looking back, I regret leaving O’Reilly out of that discussion.

Recognizing the booking issues I discussed earlier, this was an angle only. Basically, there were a lot of headlocks until Christopher Daniels, who was on commentary, interfered. A Cole/O’Reilly team beatdown of Daniels brought Frankie Kazarian to his defense. Eventually, Adam Cole grabbed a mic and challenged The Addiction to match with Future Shock, reunited for one night only. NR

Future Shock vs. The Addiction

This was a fun little tag that, again, was more about developing future matches than anything else. There was the standing reDRagon/The Addiction feud as well as the simmering Adam Cole/The Kingdom issues. The match ended with Adam Cole rolling up Christopher Daniels for a flash victory. It seems like it would make more sense for O’Reilly to get the pin, considering the reDRagon/Addiction program so that does make me wonder how Cole and O’Reilly line up in the pecking order. Maybe these things don’t mean as much as I think they do but that’s what got me in trouble regarding O’Reilly in the first place. **1/2

The post-match became a scrum featuring The Addiction and Chris Sabin battling Cole, O’Reilly, and Bobby Fish. After those two trios separated, The Kingdom stepped out from the back to bring everything full circle. There is plenty of intrigue and enough potential matchups here to book the TV for sometime. While I don’t personally care about a lot of the talent involved, this was a good use of everyone. Against all odds, I’m actually interested to see what happens between Cole and The Kingdom.

Final Thoughts: What a bipolar product This was a good television episode. There weren’t any exciting matches at all but it did a great job of continuing to build the major programs in the company. That’s all I’m ever asking for as a weekly viewer. Cedric Alexander and Kyle O’Reilly are guys who haven’t gotten great singles pushes and the company may be getting behind them here. That is a positive development. Adam Cole is also still a young guy who can carry Ring of Honor. And with Cole, it’s unclear if WWE is particularly interested. If that’s true, he’s exactly the type of talent ROH needs to lock down and keep featuring. I don’t want to get excited because it’s likely next week’s show will be a dumpster fire. But if this were the start of something, it would be a good start. 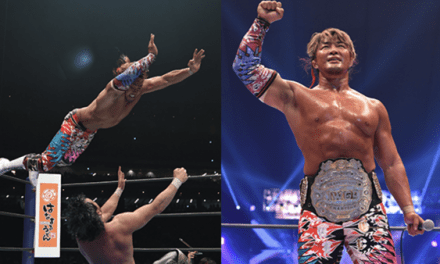