Ring of Honor announced last week that they have re-signed Roderick Strong:

There had been heavy rumors that WWE was seeking to sign Strong, along with other top ROH wrestlers. In fact, the talk has been that WWE/NXT is engaged in some sort of war with ROH. The evidence that a war has begun generally starts with the fact that NXT has started booking shows for the nights before major WWE pay-per-views, which were nights previously used by ROH to book cards in the same area while an audience was already in town. Additionally, WWE may have checked into using buildings that ROH uses, seeking agreements that the buildings would no longer take ROH’s business. There was some real gas thrown on the fire with the recent reporting that WWE is in talks with Destination America, which may have had something to do with Ring of Honor losing their 9 pm slot. Losing national television wouldn’t be great for the company but there is no front on which ROH is less built to withstand attack than that of their talent roster.

If there is some sort of war, re-signing Roderick Strong was a major victory for Ring of Honor.

That victory wasn’t specific to Strong, who enjoys a strong reputation but isn’t in any danger of becoming a mainstream star. Instead, it was a victory because the recent confluence of the methods used by ROH and WWE/NXT to obtain and develop talent mean that Ring of Honor is in serious danger in the near future.

Roddy Strong has been with ROH since nearly the beginning of the promotion and of his career. Guys like The Briscoes, BJ Whitmer, and Strong have been the foundation of ROH since its inception. However, in its early days, ROH filled out its roster with top independent talent (or wrestlers who were on their way to that status) like Bryan Danielson, Christopher Daniels, and Low Ki. That operational strategy, mixing guys who were at least vaguely ROH guys with wrestlers with established names, served ROH well for years. That is why so many of today’s top stars in WWE and NXT spent at least some time in Ring of Honor.

More recently, however, ROH has abandoned that strategy largely in favor of only bringing in new talent who go through their tryout camps. There are exceptions, like adding Christopher Daniels and Frankie Kazarian after they left TNA. ROH tried to do the same thing with Samoa Joe, who eventually ended up in NXT instead. However, Daniels and Joe both previously wrestled in ROH. They have also brought in Alberto El Patron but use him sparingly. The new talent in the company is made up of people like Adam Page, Moose, Ray Rowe, J. Diesel, and Donovan Dijak. There is talent there but, other than Moose, that group doesn’t likely contain anyone who could eventually carry the promotion. The rest of the roster is filled out with guys who have been with ROH for a long time or who are contracted with New Japan Pro Wrestling, a company with whom ROH is lucky to have a great relationship. Unlike the early days of ROH, they don’t bring in the top independent stars anymore.

One particularly interesting thing about this alleged war between NXT and ROH is that ROH finds itself in a similar situation that NXT did not so long ago. NXT was made up of wrestlers who had developed within the WWE/NXT system, with only a few competitors sprinkled in who had gained experience wrestling on the indies and around the world. Yet, the performers who kept rising to the top, getting over with the crowd, and regularly delivering the best performances were the wrestlers who came to NXT with a bevy of experience, needing only the final touches. Then, suddenly, the NXT roster was bursting with that brand of talent, wrestlers like Kevin Steen, Prince Devitt, KENTA, Samoa Joe, Uhaa Nation, and others. It’s unclear if the WWE powers that be recognized that their own developmental system was failing or if they simply wanted more draws for a touring brand but the result was that NXT became a deeper, more interesting, and much more skilled roster and product. And all reports indicate WWE intends to continue bringing in similar wrestlers.

Therein lies the real problem going forward for Ring of Honor, especially if there is a war to fight. The Briscoes and Roderick Strong have stuck around, though there are conflicting reports on whether either ever had an offer from WWE. But both acts are relatively older and won’t be able to float the company forever. So they must build Moose, Dijak, etc., and hope they strike gold with one or more of them. Of course, if they do develop someone into a legit draw, the likelihood is that WWE’s new talent acquisition strategy means that performer will quickly obtain an NXT offer. Then, ROH is back where they started, needing to develop more stars from next to nothing.

A war between ROH and NXT, even if it’s fought only over talent, is one that ROH just can’t win. They haven’t shown themselves able to consistently develop completely unmolded talent. And they refuse to bring in top independent stars to bolster their roster and ultimately put over the homegrown talent that do find their way. But the immediate concern is that if WWE comes in and signs Adam Cole, Moose, and Kyle O’Reilly, Ring of Honor will have nowhere to turn.

They must change their philosophy. They could bring in top independent stars like Ricochet, Johnny Gargano, and Timothy Thatcher, or whichever indie guys you want to mention who can immediately add depth to the roster and create compelling, fresh matchups. Or they could even focus on guys that WWE has either discarded or lacks interest in, so that there’s less concern about WWE coming after those performers in the future. They have used that strategy somewhat with Matt Sydal. But, on a bigger scale, it would involve regularly bringing in wrestlers like Chris Hero and Drew Galloway (depending on his future within TNA). Those are the kind of performers (and you could easily list others) who have serious followings and have proven their ability to do quality work.

If the problem is just that Sinclair doesn’t want to fork out the money to bring in that kind of talent, they will soon wonder if they could have done more to save that wrestling company they owned. 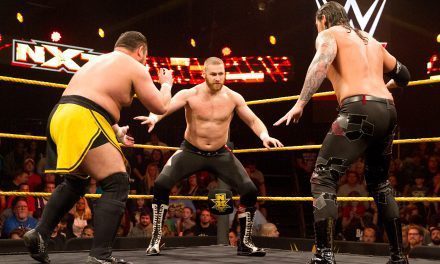 Match of the Month (March) – Voting