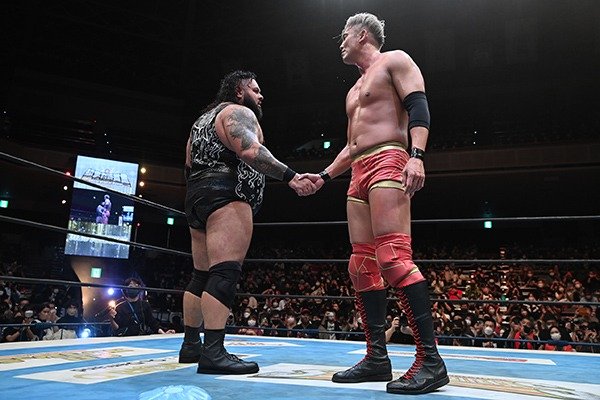 The longer you watch pro wrestling, the more you appreciate the simplest of stories. Not everything needs to be the biggest and the loudest to excite you.

In fact, during a time in wrestling where everyone is trying desperately hard to one-up each other, whether that be through high-risk moves or through outrageous storylines and angles, a seasoned wrestling fan will take a special kind of pleasure in seeing the simplest of stories told well.

Big Man vs. Smaller Man, or David vs. Goliath, is one of the oldest stories in human history. There are not too many ways to explore that angle that haven’t already been covered numerous times. Sometimes though, you don’t need to reinvent the wheel, all you need to do is make a really nice wheel and people will appreciate it.

During their match at NJPW’s Declaration of Power, JONAH and Kazuchika Okada created a really nice wheel. JONAH, the superheavyweight, had already beaten Okada during the G1 Climax Tournament earlier this year, in a match that will likely end up on many MOTY lists. The shock of seeing JONAH defeat Okada sent a shiver throughout the EDION Arena in Osaka and a vocal response from the audience that isn’t supposed to cheer due to COVID-19 restrictions.

When they met again in a rematch at Declaration of Power, it was hard to believe they could top that match. Okada was almost certainly going to win, and a huge part of the first match was seeing the upset. How could a match be better if it doesn’t have that upset lurking at the end?

The answer was to play off the first match, and tell the story of Okada trying desperately to slay the monster. Okada, obsessed with slamming the 300+lb JONAH, and JONAH using his bulk to fend off the determined Okada and prove that his previous win wasn’t a fluke. For hardcore fans, there were call-backs to previous matches and a few shout-outs to the 1996 match between Vader and the late Antonio Inoki, who told a very similar story in what most people consider to be Inoki’s last great match.

Time and time again, Okada tried to slam JONAH but was thwarted. JONAH used that obsession to impose his will on Okada, but couldn’t put him away. The match was good; but what really turned it into a true spectacle was the closing stretch. 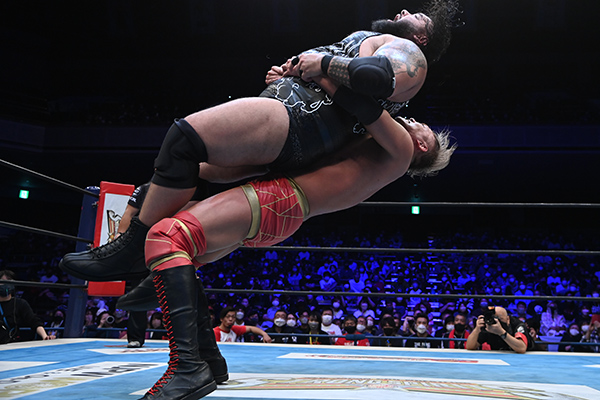 Slowly, and with great anticipation from the fans, JONAH climbed the top rope. Selling some of the damage accrued earlier in the match, he painstakingly climbed each turnbuckle. He stood at the top of the ropes and stared down at the prone Okada as the crowd watched with bated breath.

As he hurled his massive body through the air; women in the audience (who, again, are not supposed to be making any vocal noise) shrieked as they were certain that the hero Okada was about to be crushed, just like he was in the G1 Climax. However, this time, Okada rolled out of the way and JONAH crashed to the mat without connecting with his target.

I tried my best to describe it, but you really need to see the spot for yourself to appreciate it. It’s the simplest spot in the world; a big heel going for a splash and missing as the babyface gets out of the way at the last minute.  Yet, because of the story they were telling, and how it played into their previous match, it was executed so perfectly that it felt more emotional and dramatic than almost any other spot you will see in wrestling this year. It was like watching a high-risk circus act from the 1930s where the crowd doesn’t know if the man on the trapeze is going to slip and crash to the ground.

After JONAH went splat, Okada would finally hit JONAH with a slam (using a modified version of the Landslide) and then pinned him with a Rainmaker. 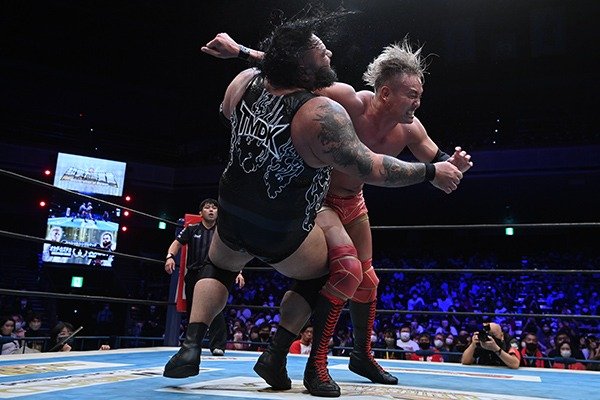 Okada won, just like everyone expected him to all along. The match, though managed to be just as good, if not better, than their first encounter, thanks to the execution of such a simple story.

It was PERFECT professional wrestling.

At its best, NJPW utilizes melodrama in a way that ties into the “real sports” feel of the product. Okada vs. JONAH had melodrama, you don’t hear the concerned shrieks of the fans without it, but it was done in a way that didn’t feel manufactured and didn’t rely on an interminable slow-burning story that wastes time. They had a story to tell, they went out and told it efficiently, and it felt like the drama you would see in the closing stretches of a heated sporting event, not the closing scene of a daytime soap opera.

JONAH has found a new level in NJPW.

He was always a solid performer but never felt like a true main event talent. In NJPW, thanks to the house style and pacing (and also employing some of the best performers in the world), he feels like a viable top star. The style of NJPW plays into his strengths (bumping while being very wide) and hides his weaknesses (his lack of height, and below-average promo), and the result is a performer who has a much higher ceiling.

I have no idea if he will be in NJPW in the long term, or if he is headed back to WWE. Triple H was high on JONAH in NXT, and he will probably be used reasonably well if he were to return to WWE. But he won’t be doing THIS. He won’t be telling a story like he did with Okada, because that isn’t how WWE operates and probably never will be. This version of JONAH can be a top star because he is allowed to tell simple stories that are not overwrought with forced melodrama and promos. JONAH has exceeded his past expectations in NJPW, and it would be a loss if he doesn’t spend more time with the company. 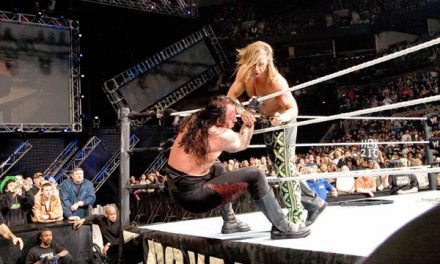