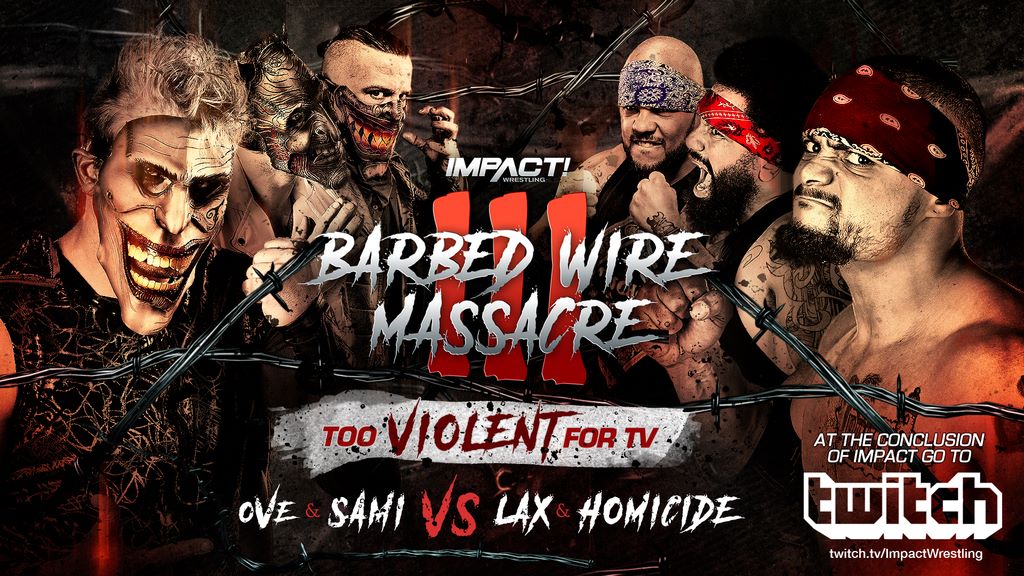 This week’s Impact was headlined by the third iteration of the Barbed Wire Massacre, a match pioneered in the company by Abyss (quel surprise?). Well, I say headlined, but the entire promotion this week has been that the match was deemed “too violent for TV” and would instead be broadcast via Twitch.

Given that the most recent Barbed Wire Massacre took place almost 10 years ago, I thought for this week’s column I would go back and rewatch both previous matches in TNA before watching this clash between LAX and OvE, a useful and entertaining exercise.

I got all nostalgic watching this. You’ve got Father James Mitchell, Abyss can move, Sabu is closer to the peak of his powers and you’ve got Don West and Mike Tenay on commentary. Vintage TNA. There were chair shots to the head as well, although I can’t say I miss them. Abyss matches do nothing for me now, but I have a tremendous appreciation for all he has done for the company. Through all the ups and downs he’s been there, taken more than his fair share of rough bumps and done what he’s been asked. A genuine HoF candidate in the company if there ever was one.

This is the shortest of the three barbed wire massacres but it’s a thoroughly enjoyable one. Abyss takes some heavy cuts to the arms and proceeds to spread his plasma all over the ring. It’s not necessarily hygienic, or helpful as this opened the show, but it does add to the spectacle. Sabu eventually won by sandwiching Abyss between two barbed wire boards, and whilst I found the finish a bit hokey, this was a good watch. ***1/4

The storyline of this match was Judas Mesias (aka Mil Muertes) and Abyss both being the sons of Father James Mitchell and as brothers do, getting into violent and bloody brawls. Father James Mitchell cuts a tremendous pre-match promo and it is a timely reminder of how excellent he was. It really is a shame that they never pulled the trigger on an Abyss World Title reign with Father James as the mouthpiece and puppetmaster.

Greenville, South Carolina’s BI-LO Center played host to this and the crowd were hot, just as they were for Sabu/Abyss – getting consistent big crowd reactions is something the new team have to work to. This didn’t sit as well with me as the first one. Perhaps it was because of the recycled spots from the first match, or perhaps it was the greater involvement of Father James Mitchell but I felt this dragged. Solid, but far from spectacular. ***

I was glad to see Dave and Jake had the sense to wear white here, as they would show up blood a lot more and add to the aesthetic spectacle of the match. Likewise the expression on Homicide’s face is exactly what you want – the Notorious 187 has a unique knack of always looking like a bad mofo who just wants to beat the crap out of someone, an emotion this match and feud needs. Shame there wasn’t any blood though! Having six men in this match gave them a lot more flexibility with spots and I thought this, the longest of the three Barbed Wire Massacres, flew by.
One notable element of this match was the ropes. Either they were less taut than those in the earlier matches, or the guys went for harder spots, but three of the sections of the ring collapsed. It was a unique visual that added to the drama. Indeed it was a touch even my mother, notoriously hard to please when it comes to hardcore wrestling, appreciated. Santana eventually secured the win for his team by driving a series of wooden skewers into Dave’s head, before hitting a superplex off the ladder through two tables. ***1/2

Easily the best of the three matches, this was a lot of fun. The feud between these two teams deserved a big blow-off match like this. Maybe they’ve never had a signature clash people can refer to, but their feud has remained fresh, interesting and entertaining over several months. The priority now has to be building up the rest of the division. These two have laid the groundwork for something special, but more needs to be done.

Now, was it “too violent for TV”? Well, you can make that call for yourself by watching the match on Youtube here. It is also still available on Twitch. I personally don’t think it was, as aside from the spot with the skewers there wasn’t anything too intense, but it was a bold promotional call. It already has over 114,000 views on Youtube – last video to get that many was the farewell to James Storm. For comparison, the next most viewed video this week was the ending of the match with 61,000.

Twitch is a platform that could be a solid business model for Impact going forward and if they can monetize that, I’m all in. The news that their WrestleCon shows will appear on there is a positive sign. Whether it is a long-term success remains to be seen.