One week away from the NXT network special, this episode is sure to serve as more of a preview show than an actual standalone show. Which is fine, you should use your regular episodes to build to the big show, in this case, NXT Clash of the Champions III: Takeover II. Like recent NXT episodes, this is inoffensive but not great. It’s a streak NXT has been on for quite some time which is fine for now, but they shouldn’t get used to it. NXT offers a great opportunity for WWE to sell the Network. If the rumored call-ups are true, there will be an influx of new NXT stars and I think that’s a good thing. I also think with the new talents on the way (Kevin Steen, KENTA, Devitt) NXT needs to get back to its workrate past, they do a great job of differentiating from WWE television but I’d like to see that expanded upon even further. Anyway, let’s get to this episode!

Charlotte vs. Alexa Bliss: Charlotte kicks the match off with a side headlock which is reversed by Bliss into a headlock of her own. Decent head-scissors from Bliss, she tries it again but Charlotte reverses it into a backbreaker. Powerbomb attempt by Charlotte but Bliss rolls into a sunset flip and gets a two count. Charlotte is not happy, she slaps Bliss then hits the Somersault Cutter for the 1-2-3. This didn’t last long but it was solid as usual, Bliss is starting to show some improvement and Charlotte continues to dominate. I wonder if this will be the last time we see her as an NXT regular. I think she could use some more seasoning and more time enhancing her character but with a depleted current Divas division, Charlotte getting the call-up seems inevitable. **

Post-match Bayley makes her way down to the ring, she says earned the opportunity to face Charlotte and even though nobody takes her serious, she’s “seriously taking” Charlotte’s title at Takeover II. Bayley reaches out for the handshake again but Charlotte instead slaps her, Bayley recovers and hits a Bayley to Back suplex. Charlotte rolls out of the ring and Bayley holds up the title. Nice build here, I’m pumped to see this match next week.

KENTA is coming. I am excite. Seriously, how cool is it going to be to see KENTA each and every week? The way they are hyping him, I’m led to believe he’s going to rise quickly and won’t be on the Yoshi Tatsu hip-toss plan.

Tyler Breeze vs. Tye Dillinger: My girlfriend’s favorite wrestler, Tyler Breeze down to the ring. I’ll give my predictions at the end of this show but I’m fairly certain he’ll be our brand-new NXT Champion after next Thursday, we’ll see. Lots of Tylers in this match. Wristlock from Breeze, Dillinger reverses it into a headlock then follows with a nice shoulder block. Atomic drop and some solid chops and Breeze is reeling. Breeze finally gains control and starts working Dillinger on the ground. Front face lock from Breeze (this is our 6th headlock-style manuever by my count — can you tell this is the final night of a taping?). Breeze with the Beauty Shot out of nowhere, funky looking pinfall and it’s all over, Breeze wins easily. This was okay but nothing special. *1/2

All the Italians are backstage, Enzo and Big Cass have a new lady, Carmella, who if I know Joe Lanza, instantly became his favorite Diva ever. She’s as gaudy as humanely possible, she owns a poodle, is overly tanned, wears leopard print and has a miserable Jersey accent. Anyway, Enzo poured Nair hair remover on her poodle and all of its hair came off.

Tyson Kidd vs. Adam Rose: If you guessed that this match started with a side headlock, you’d be correct! Rose with a quick headlock, Kidd reverses it into a headscissors and starts working Rose over in the corner. Commentators making a huge deal about next Thursday being the biggest night in Kidd’s career. They are doing a great job of putting that match over, with the four different competitors all having their own goals and motivations for the four-way. Kidd wants to get out of his wife’s shadow and redeem his, to this point, disappointing career. This is simple, wrestling 101 booking and I’m so glad there’s WWE show that still utilizes it. And just when the announcers were promoting Kidd as the “last graduate of the Hart Dungeon”, Kidd locks on the Sharpshooter and gets Rose to tap. This was a solid match, not spectacular but did a great job of building Kidd as a favorite going into next week’s main event. **1/2

Veronica makes her final NXT appearance interview The Vaudevillains. I’ll miss her a lot but at least they didn’t take my Devin.

Sami Zayn vs. Marcus Louis: Again, the commentators spend time building Zayn’s motivation. They are going a hell of a job here, bravo to them. I love that Louis’ trunks literally say “FRANCE” on the back. That’s pretty great. Wristlock by Louis to start us off, then, you guessed it, a headlock. I’m not complaining, I want these shows to be basic and simple but god damn let’s try another submission, guys. Zayn drives him into the corner, hits a big clothesline and starts ZAYNING UP, Koji Clutch and it’s OVER! *1/4

Adrian Neville vs. CJ Parker: They are building the four-way as Neville having the odds stacked against him. He’s honestly been the worst built guy going into the match which is pretty surprising. Saxton throws out my favorite WWE star: “Neville has a 25% chance of winning!” No, that’s not how odds work. The Jacksonville Jaguars do not have a 3% chance of winning the Super Bowl just because they happen to be in the league. Heath Slater does not have a 1/30 chance of winning the 2015 Royal Rumble. This must be driven into their announcers because they ALL do it but god it’s the worst. Anywaaaay… Neville puts on a side headlock because NXT. Parker reverses it with a nice looking spin kick and starts pounding away on Neville. Adrian gains control, hits a missile dropkick and finishes Parker off with a Red Arrow. This was very short but Neville looked pretty solid going into Takeover II. *3/4

Sin Cara and Kalisto vs. The Vaudevillains: This is the tournament final to determine the new #1 contenders to the NXT Tag Titles, currently held by The Ascension. I’ll let you guess how this match started (for reference it was a side headlock from Aiden English). Kalisto is trying to get the crowd hyped with LUCHA chants but they are silent. Remember, this is the last match in a long set of tapings, this crowd is toast. You can see people visibly leaving the arena during this match. Nice teamwork by Sin Cara and Kalisto. Gotch comes in but meets a few dropkicks from Sin Cara. Clark Gable reference from Renee, she’s been taking notes from JBL. English and Sin Cara trading offense, Sin Cara hits a nice looking crossbody and finally gets the hot tag to Kalisto. As mentioned, the crowd is dead for this which is a shame because it’s been a solid, quick paced match. Kalisto with a series of kicks, Salina Del Sol by Kalisto, tags in Sin Cara for a senton and it’s all over. Sin Cara and Kalisto will battle The Ascension at Takeover. Crowd was dead but this was a lot of fun and a nice sprint but by teams. **

Post-match, The Ascension works their way down to the ring. They have some new Illuminati-styled shirts that actually look pretty cool by WWE standards. They hold their titles up at the top of the ramp as we go off the air.

Decent show, I definitely enjoyed it and you absolutely should watch it as a preview to NXT Takeover II. No blow away matches but everything was solid and there was no Bull Dempsey or Mojo Rawley!

I’ll have a larger prediction and preview article out early next week but here’s my quick rundown: 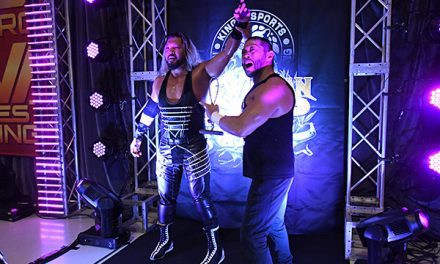