This week on Wrestling Omakase we talk four huge shows from NOAH, NJPW and DDT in an absolutely packed episode!

The Wrestling Omakase Patreon is your best source for coverage of Japanese wrestling, from yesterday and today. Patrons get so much bonus audio that never hits the free feed, most notably including two full length Omakase episodes per month. Already in February we had our 5 Matches episode with WH Park from POST Wrestling, and coming up next week will be our first ever NJPW Retro Roulette episode covering past Anniversary Shows! Plus, our shorter and yet still jampacked 1 Match episodes that each cover a certain theme (we just finished up the first part of our series watching every Tokyo Dome main event in order, covering through 1995, and then started another series covering patron-submitted matches with everything from BattlArts, DDT and NJPW covered so far), ANIME OMAKASE, daily coverage of all the major Japanese tournaments, and so much more! You can get access to all of this right now for only $5 at www.patreon.com/wrestlingomakase!

John is joined by returning guest & VOW contributor Gerard di Trolio (@GerardDiTrolio) as they start out with a tiny bit of AEW/forbidden door talk, but very quickly transition right into this week’s topic- a ton of big puro shows to cover! They start out with NOAH’s much-anticipated return to the Nippon Budokan from 2/12, Destination 2021, and get right into their thoughts on the controversial Keiji Mutoh vs. Go Shiozaki main event (and specifically the result). They eventually review every match on the card of this eventful show, talk about how NOAH is trying to present themselves as the “anti-NJPW” in many different ways, and discuss where things might be going during the rest of 2021.

Then they turn their attentions to NJPW’s two New Beginning in Hiroshima shows, and John has some complaints here. What the hell is this EVIL/Okada feud? Does this booking for Naito to challenge Kota only for the Intercontinental title make sense with what they’ve done previously? These weren’t great shows, and John runs down some of their big problems. Plus, they look ahead to two very different looking CASTLE ATTACK shows at the end of the month.

Finally the two of them wrap things up with a full review of the DDT Kawasaki Strong show from 2/14, including the huge Jun Akiyama vs. Tetsuya Endo main event as well as the rest of the card. They then look ahead to what DDT has coming up for the rest of the month and get excited about a future KO-D title match, as things look strong for DDT coming out of this show (well, Universe performance aside!). 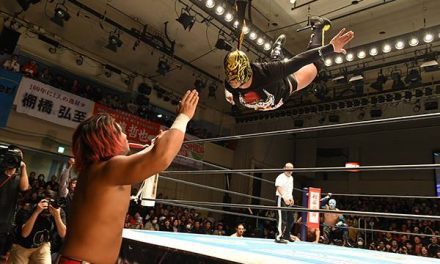