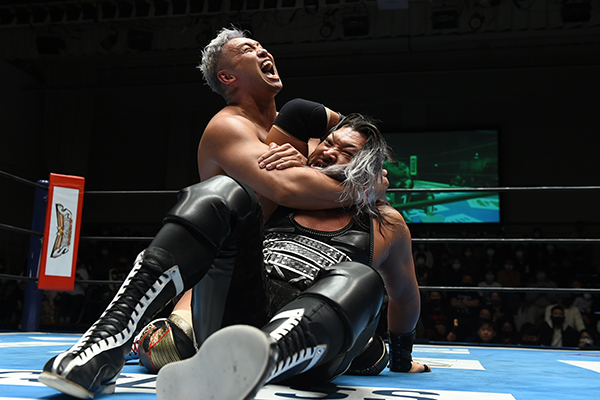 Man the trebuchet and boil the oil.  We’re on the way to Castle Attack!  Unfortunately, New Japan had us under siege during the New Beginning tour.  We saw tag matches descend into utter nonsense, main events start another chapter fifty pages after they should have ended and SANADA wondering what he should have for his breakfast when he should have been building a match.

It’s starting to feel like the trust is fading with New Japan.  So often, Gedo has made an unusual decision that turned out to be absolutely correct.  The decision to keep the BULLET CLUB on life support is the exception that may prove the rule.  BULLET CLUB might be the merchandise-driven link to the West, but they’re dragging these shows into the doldrums.

For a fleeting moment, I was into Yuto Nakashima.  He looks like a very angry young man, and his enthusiastic Young Lion roar didn’t seem affected or cheesy.  Unfortunately, twenty seconds into the match, he dislocated an undetermined part of his arm. Perhaps worst of all, it didn’t even look impressive.  It won’t make much of a clip to look back on if he becomes IWGP champion.

To his credit, he stood up and mouthed off to the confused looking Uemura.

Ospreay has doubled down on the shameful British imagery, adding a scent of football hooliganism to the already lingering stench of colonialism.

I shouldn’t mock Will Ospreay too much, because he’s been the most interesting thing in the company since Wrestle Kingdom.  The match with Kojima was the second-best match of the New Beginning tour, and it took a MOTYC to beat it.

Tanahashi attacked at the bell, starting a fight with his coat still on which would be unthinkable in a civilized brawl.  It set the tone for a fire-filled heat fest that entertained as much as it built their match.  Both Tanahashi and O-Khan are great at making basic rest holds look vicious, and they were excellent at maintaining interest in their match without giving away anything too juicy.

Cobb being a baddie has finally added the piece he was missing.  I love a heel who is incredibly aware of their talent and Cobb bouncing Tana around to threaten his opponents was excellent.

Everybody here was fired up, and Gabriel Kidd being the bastion of truth and justice gave him a more prominent place in this match than the simple pin-eater.

I don’t trust the BULLET CLUB. Being a nefarious bunch of ne’er-do-wells, that shouldn’t be a surprise.  However, the mistrust has broken through kayfabe’s necessary fourth wall.

I know ELP is a good wrestler.  I saw him have very good matches many times when he was based in the UK and, perhaps most damningly, there are elements of good work in his New Japan run.  The problem is, he wants to tell the same joke night after night.  I understand the irony of the back rake.  It’s an archaic move that nobody does anymore and we can all laugh at his nail-care routine to ensure it is as effective as ever.

The elephant in the room is that it’s really boring and it has diminishing returns.  It’s the same with the weighted boot.  ELP can do whatever he likes, but he has conditioned me to expect disappointment in the end.

Hiromu and ELP have interesting segments up their collective sleeve, and they show a couple here, but the dark cloud of shit is always hanging over ELP and the forecast says rain.

As discussed on the most recent Flagship, Hiromu’s match with SHO failed because they tried to put a round peg in a square hole.  Hiromu needs the sprint, but they made him run the marathon.  The fact that the ELP match is a semi-main gives me some hope, but they chose to start the build with a push-up contest.

In a beautiful moment of irony, Hiromu pushes it one step too far and falls flat on his face.

Shingo takes the pin here, which shows his rehab is beginning despite not having a match on the big cards.  Yet.  Skip  **¾

T-shirt Naito isn’t just an aesthetic, but a lifestyle.  It’s the t-shirted low effort attitude that plagues this match.  It’s my task to say interesting things about it, but I don’t know what to say.

SANADA and Ibushi feel like the metaphorical groundhog, and I feel angry at myself for watching them.  How many times will I return to the well, thinking the poison has disappeared on its own?  SANADA is a mid-carder, fooling us all with his stunning good looks.  He has all the hallmarks of a main event star, apart from the ability to have a great match.  If he can’t do it with Ibushi, he can’t do it with anyone.  He certainly didn’t do anything here to make me think he deserved a third chance.

The Naito and Ibushi segments were fine, but Naito is a hard wrestler to get excited about.  His matches always deliver, but unless it’s the main event of a Tokyo Dome show, my brain doesn’t seem to want to know until the bell rings.  This is compounded by the booking corner they have got themselves into here.  I understand the story – Naito doesn’t want the belts unified so he challenges for the lesser belt – but what then?  Belts don’t hold any more value than they are given, and how much value does the big belt hold if the champion is pinned for the secondary title?  The frustrating thing is that it’s all so unnecessary.  Have Ibushi vacate the Intercontinental title.  Getting it off him like this will throw the baby out with the bathwater.

Like Hiromu falling on his face before him, SANADA creates another perfect metaphor by winning this with a roll-up.  Another skip.  **3/4

Jay White is great.  I know it’s a controversial opinion in some circles, and I completely understand why, but there’s something captivating about a wrestler who understands the little details.  The old cliche of ‘no wasted motion’ applies to Jay White, but it’s an ethos that has infested his character.

The way he intimated Gabriel Kidd on his way to the ring suggests that he hasn’t realized the error of his ways, but decided he didn’t go far enough.  The way he stared at Ishii, mocking him with a simple chinlock, makes me think that the teething problems of his first heel run are gone.  I feel like we’ve entered a new stage in Jay White’s heel run, where he has realized that he is one of the best wrestlers in the world and his intimidating psychology can come from being the unbeatable prick.

Ishii and White, as expected, were the stand-outs here and even a clumsy faux-botch from Tanga Loa to wrap it all up couldn’t ruin it.

This was a mix of build that wasn’t quite as cohesive as it needed to be, but thankfully Chase and Yano were eliminated early.  The build to the tag match was good, if not a little clumsy, but the BULLET CLUB cloud of shit neutralized it slightly.  Nobody has any doubt that there is a potential for a great tag match but the threat of Tama Tonga giggling to himself while putting boxing gloves in brown paper bags destroys any credible build.

EVIL and Okada were good, but it feels like the penultimate chapter in a boring book. It’s time for this to finish so we can all move on. ***¼

It’s a struggle to summarise these Road-To shows.   I don’t expect top-level matches, but I do expect to be entertained.  The true opener and the main event were entertaining to a certain point, but are they worth watching?  Probably not. 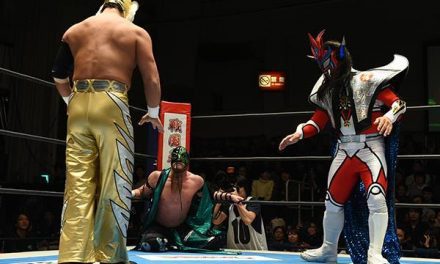 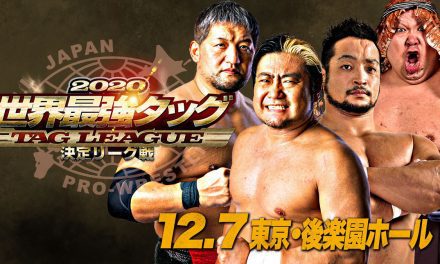