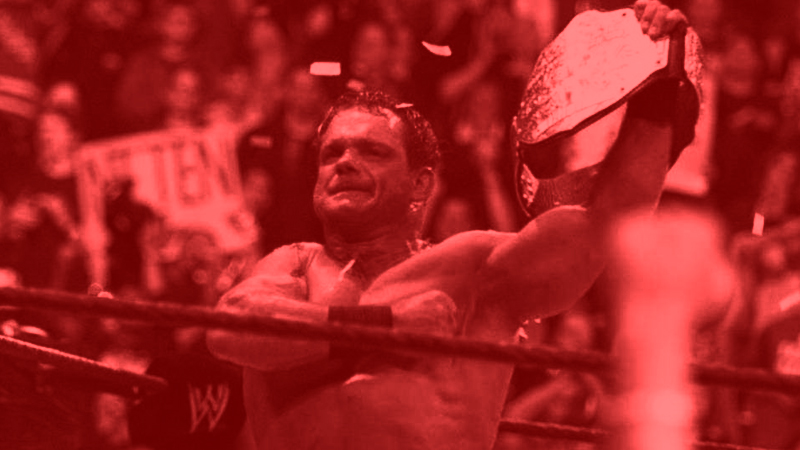 Chris Benoit is one of the most polarizing figures in pro wrestling history.

A cult favorite for those who, like myself, were “work rate nerds”, Benoit’s in-ring work was some of the best we have ever seen from a performer. That same work, however, cannot be thought of unless you include the context of the atrocity the same man committed when he killed his wife and young son before killing himself.

This piece delves into the complicated relationship I have with Benoit’s ultimate achievement and one of the best WWE builds in the last 20 years, winning the World Heavyweight Championship at WrestleMania XX in Madison Square Garden.

The start of the story can be traced back to December 2, 2003, in San Jose, CA when Chris Benoit faced Brock Lesnar for the WWE title on SmackDown. This was a very good TV Title match (Meltzer gave it 4.25*) that steered the direction for Benoit moving forward. The GM of Smackdown Paul Heyman declared that Benoit would never get another shot at the WWE Title. Later on, with the Royal Rumble was looming, Heyman set another obstacle in front of Benoit making him enter the Royal Rumble at number one overall. Only one other wrestler had won from the number one spot and that was Shawn Michaels in 1995.

Fast forward to the Royal Rumble and Benoit outlasted all 29 men, including a fantastic finish against The Big Show, where Benoit brilliantly leveraged Show over the top rope after being in the match for 61:30. Benoit was halfway to reaching the top of the mountain by earning the opportunity to main event the grandest stage of them all in the most legendary American venue: WrestleMania XX in Madison Square Garden.

The RAW after Royal Rumble 2004 started out with HHH and HBK in the ring after their draw in the Last Man Standing match for the World Heavyweight Title the prior evening. Remember that these two were in the midst of a six-year-long blood feud after HHH took over DeGeneration-X when Michaels had to step away due to his back injuries. Stone Cold comes out and announces that the winner of the 2004 Royal Rumble match (Benoit) would be challenging for the World Heavyweight Championship at WrestleMania XX. As you can imagine both men were outraged that Benoit made the jump to RAW. This was well before brand jumping became commonplace.

With Benoit now in line to challenge HHH at WrestleMania, an incensed Shawn Michaels went on a warpath to do everything he could to get himself in the match against HHH. In a promo Michaels cut on Benoit during the contract signing, he referenced the blood feud with HHH and that it needed to be finished on the grandest stage of them all. Benoit starts firing back and Michaels delivers Sweet Chin Music, signs the contract and leaves a shocked Eric Bischoff in the ring. Shortly thereafter, Michaels was added to the match, sending HHH on a rampage where he would spend the next few weeks taking out the other two competitors.

After a fantastic six-week build, we finally arrived at WrestleMania 20. Early on in the show, we see Eddie Guerrero pay a visit to Chris Benoit in the dressing room where Benoit is getting ready. Guerrero references their history together and tells Benoit that nobody expects him to win against HHH and HBK. The comment lights a fire under Benoit and Eddie gets all excited saying that is what he wanted to see from Benoit.

Finally, we get to the match, one that received a ****3/4 rating from the Wrestling Observer’s Dave Meltzer.

As far as triple threat matches go, this was a masterclass example of in-ring greatness and storytelling. Physical, bloody and emotional. After HHH and HBK took out Benoit on the announce table, they went into the ring to “finish what they had started.” After brawling for a few minutes, HHH hits a pedigree and in comes a desperate and decimated Benoit to break up the pin. Benoit would in short order send Michaels over the top rope and force HHH to tap out to the crossface to get the pin. After the match, an emotional Eddie Guererro comes out amid the confetti falling from the rafters. Benoit and Guerrero—who had successfully defended his title earlier in the night—hold their titles and stare at each other. Eddie claps in congratulations and the two emotionally embrace in the middle of the ring, culminating their journey to the top and wrap up one of the best main event builds WWE has ever done.

To this day, the match still in my top five favorite wrestling matches of all-time as well as my favorite WrestleMania match. I started watching wrestling with the Brock Lesnar/Kurt Angle Iron Man match on SmackDown in September of 2003 and Benoit was one of the wrestlers that I was instantly drawn to. A phenomenal in-ring worker, Benoit had an unmatched tenacity and aggressiveness about him. Everything changed on that fateful day in 2007 when the news broke that Benoit brutally murdered his wife and son before killing himself. When that tragedy happened I was 17 years old and it helped open my eyes to the brutal reality separating life and wrestling. It took me a long time before I could watch back any of his classic matches, as my brain, as many others deal with as well, associated his transgressions with his in-ring prowess.

13 years later, my evolution with this match has grown into a place of peace. I have come to grips with the fact that I can disparage the man for what he did but enjoy what he did in the ring because, while they are the same person, the character is not the man. I will not, however, champion the man and proclaim that he should be in the WWE Hall of Fame or any of the other deplorable things you see in relation to Benoit today.

I understand that I may feel differently than others. Others may be unable to separate the actions from the wrestler and I totally understand. What Benoit did was unforgivable. For myself, watching him will always be bittersweet, extracting happy memories from my time falling in love with wrestling to having to swallow the awful truth of his heinous transgressions.