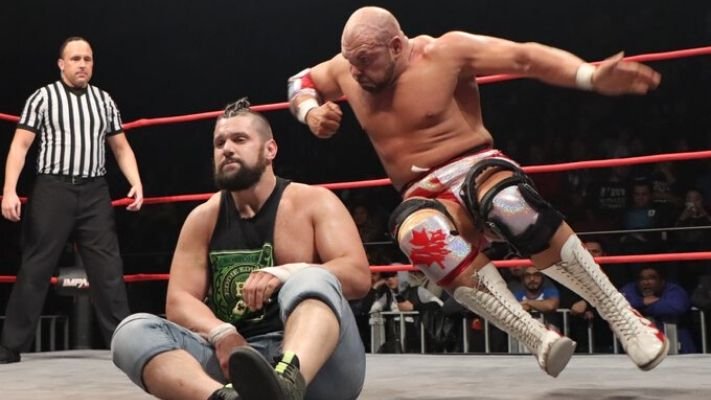 Two wrestlers competing in a ‘best of’ series, whether it comprises three, five or seven matches, is something almost as old as the business itself. It plays off the notion that the same contest could be run night after night between great rivals as promotions moved from town to town in a time where results were harder to come by. Likewise, it also plays off the notion that wrestling is a real sport, where much like in basketball, baseball and ice hockey, things have to be assessed over the course of several matches to determine the true victor.

While there are inevitable pitfalls of using formats like this, the most obvious being that the booking can become very predictable, ensuring a suitable escalation in both quality and stipulation as the series progresses and the issue of fans becoming bored of seeing the same match over and again (and it accordingly losing value as a potential draw), there are also merits too when used sparingly.

This week marked the start of Michael Elgin and Eddie Edwards’ ‘Best of Five’ series, with Elgin winning an interesting opening contest that I went ***1/2 on. It wasn’t the best contest between the two, falling a notch or two below their PPV contest at Hard to Kill, but it was a solid bout that laid the foundations for more interesting stuff.

However, this series is far from the first that Impact Wrestling has used over the years.

A common theme that emerges when looking back at them is that most involved AJ Styles or the tag team titles in some capacity.

The first occurred in the promotion’s debut year (2002) when AJ Styles and Jerry Lynn split a three-match series on a live show. Lynn won the opening contest, a Falls Count Anywhere match, before Styles leveled things by winning a No Disqualification match. The final contest, a 10-minute Ironman, finished 3-3.

Styles was once again in a ‘Best of three’ series in 2003, this time against D’Lo Brown and again it ended in a draw – the history of booking these series to finish in overall draws across multiple promotions has repeatedly aggravated me.

2004 bore witness to two ‘Best of’ series, both wagered over three matches. Amazing Red beat Sonjay Dutt 2-1 for a shot at the X-Division title in May, before America’s Most Wanted and Triple X did battle for a shot at the tag team titles. After splitting the first two matches, the third ended in a no contest (there’s a pattern here).

A whole five years went past before Impact went back to the well with the ‘Best of’ concept and once again the series was contested over three matches. Over the course of consecutive weeks of Impact television, Matt Morgan and AJ Styles did battle, with Styles winning the first match before Morgan came back to take the series 2-1.

2010 bore witness to the first ‘Best Of’ series that went to five matches and it’s the best that the promotion has produced yet. After Eric Young, Kevin Nash and Scott Hall were stripped of the titles in June because of Hall’s legal problems, a series was put together between Beer Money (my favorite Impact tandem of all time) and the Motor City Machine Guns (my second favorite Impact tandem of all time). Each match in the series had a stipulation, starting with a ladder match and finishing with a two-out-of-three-falls, but not before the four had a street fight, a steel cage match and did battle in Ultimate X. Aside from the street fight, all of them were fantastic encounters with a good amount of time and after MCMG took it 3-2, they would go on to hold the titles for around six months before losing them to, you guessed it, Beer Money.

It was then another five years before another ‘Best of’ series was put together and again it came about after the tag team titles were vacated (this time Jeff Hardy had suffered a broken leg).

The Wolves and the Dirty Heels competed over five matches, with Eddie Edwards and Davey Richards taking an early 2-0 lead before Austin Aries and Bobby Roode leveled it up 2-2 thanks to a win in an excellent Full Metal Mayhem contest. The Wolves secured their fourth, and penultimate, run with the belts by winning match five, an Ironman match.

The current series between Michael Elgin and Eddie Edwards is far from the first run by Impact over the years and there are definitely pitfalls that need to be avoided in order to make it a success – booking a clear and definitive winner would be a good start! What made the 2010 and 2015 examples so good was a) the natural chemistry between the participants and b) a strong escalation in terms of match quality and stipulation as the series progressed. Elgin and Edwards have great chemistry and having Edwards on the back foot straight away is sensible, as it will give more meaning to his babyface comebacks in the latter matches.

If the promotion wanted to, they could play off the fact that he’s been on the other side, taking an early lead and winning a series despite almost losing it. Likewise, in an ideal world they’d book it so that Elgin wins 3-1, just to show that these series do not have to always go to the full five matches (in the same way many NBA, NHL and MLB playoffs often don’t go all the way) and to establish a clear pecking order in the promotion.

Still, last week set out a solid foundation and I’m looking forward to seeing how they put it together over the weeks and months to come.