This week on Wrestling Omakase we continue our coverage of New Japan’s biggest tournament of the year, plus talk DDT’s big summer show! John is joined by returning guest Thomas Fischbeck as we start by breaking down four more nights of the 29th G1 Climax: Night 4 from Hokkaido featuring Naito-Taichi and then Nights 5 through 7 from Korakuen Hall featuring Ibushi-Ospreay, Ishii-Moxley, Okada-Ospreay and more! Hear their thoughts on some of the biggest matches of the tournament so far. Once they break down all 20 G1 matches they each give their favorite matches of the entire tournament so far, give the average star rating of all the competitors, and preview this coming week’s three G1 shows, each picking a most anticipated match from each card.

Then they turn their attention to the Dramatic Dream Team and one of their biggest shows of the year: Wrestle Peter Pan! Hear John and Thomas break down both of their pick for surefire show of the year, as they discuss every match on the card including a bonafide Match of the Year candidate in Endo-Takeshita, another outstanding match in ASUKA-Akito, some strong tags, a hilarious weapon rumble and more. Then they talk Sunday’s Summer Vacation show from Korakuen Hall featuring another great KO-D title match with Chris Brookes, a POTATO CHIP MATCH, and some set ups for upcoming shows. We wrap up the DDT portion by running down the cards for all of the upcoming Beer Garden shows. Finally, the show ends with a short but spirited mailbag, including our picks for a fantasy NJPW vs. DDT show! A fun time talking two great Japanese wrestling companies! 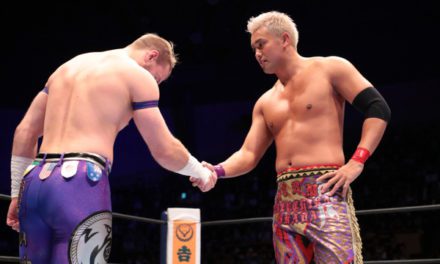