Last week, we were treated to one of the best matches this show has ever put on and quite frankly in my opinion, the best casket match of all time in Fenix vs. Mil Muertes. Fenix came out on top to seemingly end that long feud over Catrina’s services of evil.

This week, we take a major shift to some other storylines on Lucha Underground, more specifically stories surrounding two titles: The AAA title, and the new and improved Lucha Underground title belt. That new belt is an absolute beauty by the way, one of the best designed world titles out there right next to the IWGP belt. But the AAA title is being fought over by Texano Jr. and champion Alberto El Patron. El Patron whipped Texano senseless with Texano’s bull rope in their previous matchup, leaving the referee no choice but to DQ him. So of course, we now get a Bull Rope match for the title.

Konnan’s gotten some pretty cool vignettes the past few weeks about exacting revenge for the beatdown he received from Cage and for having to throw in the towel when Cage beat Prince Puma for the #1 contender’s spot. His protégé, champion Prince Puma, has to defend his title against Cage once again in a brutal Street Fight. Anyway, let’s move on to the show.

Angelico vs. Son of Havoc with Ivelisse: Alright, I’m not a huge fan of this whole weird love triangle thing going on here, I think it’s campy and Angelico has been a really cheeky asshole about this and not in the good heel way either. Whatever. Maybe they’ll change my mind here. Havoc starts hot with a spear on Angelico, goes for an outside dive through the ropes…and 619s through the rope? Striker said he was “changing position to adjust to Angelico getting up off the floor” but I think it was just a botch. Havoc starts getting yelled at by Ivelisse just because. Back in the ring, Havoc curbstomps Angelico for a two count. Angelico hits a bunch of his cool strike/kick combos that are visually appealing. Havoc gets up to the top rope, but gets a Pele kick for his troubles. Angelico then does the awesome running flipping senton over the corner to the outside onto Havoc. Havoc hits a bicycle kick then a standing shooting star press for 2, then a handspring elbow to the corner followed by a backbreaker. Ivelisse literally does not shut up throughout this, and grabs Havoc’s beard while on the apron which he didn’t appreciate and pushes her away so he could kick the running Angelico. Havoc then hits a sick springboard doublestomp onto Angelico’s back into a standing moonsault. This is great so far. Angelico knees Havoc in the corner, goes for the Fall of the Angels corner cross bomb, only for Havoc to hurricanrana him into the corner, holy hell that was awesome. They battle on the top rope and Havoc crotches Angelico on the top rope…and then grabs a mic. IVELISSE, YOU ARE HOLDING ME BACK, YOU ARE WHY I’VE BEEN LOSING, YOU ARE DUMPED says Havoc! He then gives the Shooting Star Press to Angelico for the victory! A great opener to set the tone, and maybe, just MAYBE this saga is over? ***1/2

Ivelisse is beside herself and can’t believe SHE got dumped, and not vice versa. Son of Havoc is not firmly a babyface. Ivelisse then kicks Angelico who is like that one douche who tries to hit up the girl who just got out of a long term relationship.

Dario Cueto’s office. He’s signing someone officially. Who is this? According to Cueto, Konnan has high praise for him…IT’S HERNANDEZ! Wow, I feel like it’s been forever since I’ve seen him, and was always a personal favorite of mine in TNA. Awesome.

Bull Rope Match (AAA Title) – Texano Jr. vs. Alberto El Patron ©: I don’t think we’ll ever reach Grave Consequences level of brutal here ever again, but these two are gonna try. This blood feud started in AAA has spilled over into LU. Both men are tied to the rope. They trade strikes to start off, and Texano wastes no time trying to maim Alberto’s face with the rope, and bite him. Alberto starts getting some offense in, dropkicking Texano outside and then hitting a hurricanrana from the apron. Alberto climbs up top, but Texano smashes him with the cowbell and chokes him with the rope again. Texano brings in a chair and smashes Alberto in the back and wedges it in the corner. Alberto hits a DDT, Texano hits a dropkick, and then Texano gets cracked over the head with the bell on the top rope. Alberto hits the superplex. Alberto hits a backstabber, and grabs another rope that Texano brought to the ring and whips him with it. Texano hits a codebreaker for a near fall. Alberto eventually positions Texano on the top rope in a reverse suplex position and hits it for two. Alberto calls for the armbreaker but Texano launches him into the wedged chair for a near fall. Texano grabs a table, but Alberto hits a knee crusher on the arm and then hits a superkick. Alberto tries to go for a super hurricanrana to put Texano through the table, but Texano counters and powerbombs Alberto through the table for only a two count! Texano smashes Alberto with the cowbell while he was on the top rope and goes to superplex him only for El Patron to grab his arm over the rope Minoru Suzuki style and taps out Texano to retain. This was solid, Texano is a hell of a rudo and I enjoy what I’ve seen of him so far. ***1/4

Boyle Heights Street Fight (Lucha Underground Title) – Cage vs. Prince Puma ©: Hernandez is here again, watching from the stands. Dario Cueto comes out with the NEW AND IMPROVED title belt! It’s so nice and shiny. Cueto holds it up like a champ, because the man does everything on this show so perfectly somehow. We get underway with a Puma dropkick, but Cage just clotheslines the holy hell out of Puma of the apron. Puma goes for a hurricanrana out here but gets powerbombed into the post. Cage beats the tar out of Puma out here, throws him back into the ring and gets a chair. Cage goes for a chairshot, and gets kicked in the stomach, and then Puma nails a Vandaminator on Cage. Puma grabs a garbage can lid and whacks Cage repeatedly with it. He then does a shooting star press onto cage with the lid on Cage. Puma sets a table up outside, but Cage nails Puma with the lid. Back in the ring, Puma springboards but Cage catches him in torture rack position and hits a backbreaker from that position. Cage is ungodly athletic and nimble for his size. He tries to deadlift suplex Puma out of the ring but to no avail. Puma then hits a shooting star press from the corner to Cage on the outside. Cage is placed on the table outside, Puma then springboard 450 splashes Cage through it. Puma is nuts. Camera keeps cutting to Hernandez and Konnan during all of this, I can only wonder WHY…back in the ring, Puma goes for a top rope maneuver and Cage pushes him to the outside. Cage places Puma’s head in the chair and then slams him into the post. Konann tries to intervene only to be tossed into the metal fence. Cage snatches the garbage can and tosses it in ring. Puma nails Cage with a suplex on the chair in the ring, and then signals for a 630. Cage moves out of the way. Cage hits a discus clothesline for a near fall. Cage hits Weapon X, but doesn’t go for the pin and just beats the hell out of Puma. Repeated powerbombs, the last one sending Puma onto the garbage can. Cage now calls out Hernandez! Hernandez distracts Cage long enough for Konnan to wack Cage with his cane. Another garbage can is tossed in by Hernandez. Puma hits the 630 for the win. Kind of a wacky finish I wasn’t too fond of, but still a good match. I just felt the Hernandez stuff just didn’t really do much for the match, but it’ll make for a good hoss fight between Cage and Hernandez in the near future I presume. ***3/4

Final Thoughts: Even with two title matches, I don’t think this show was quite the landmark like last week’s episode. But you gotta remember, that had Grave Consequences which was truly a MOTY candidate so it’s hard to follow an episode like that. Regardless, we got all solid to good matches from everyone here. Finally, Son of Havoc broke away from Ivelisse to become a babyface. Thought the main event should have been more about Puma/Cage and not Konnan/Hernandez, but I understand that it helps further the story here. Not exactly sure what’s next for champions Alberto El Patron and Prince Puma. I think Puma will be getting another challenger soon, hopefully Fenix seeing as he’s on fire (bad pun) right now and it makes sense. We may get one more match between Texano and Alberto, so we’ll see. 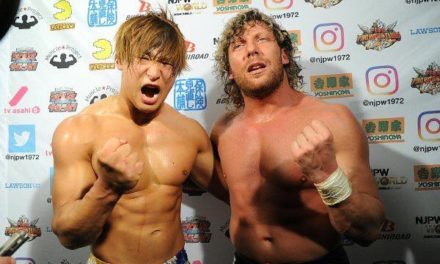