Fair warning. This review was written while extremely grumpy. No Titus again?

This marks two straight weeks without the future 2014 Most Improved Wrestler of the Year Titus O’Neil, which would be perfectly acceptable if Titus had graduated to a RAW or Smackdown push. But clearly that isn’t the case if you saw Titus vs Bo Dallas on RAW.

Look, there are many things wrong with a big Bo Dallas push, aside from squashing everybody’s favorite Superstars hoss (apologies to the BIGG HOSS, Jack Swagger, who also deserves better). For starters, I can’t take him seriously as a top guy with that gimmick. I just can’t. And I don’t think crowds ultimately will either.

Two, I have no confidence that he can go at the WWE main event standard in the ring. I’ve been critical of his brother in that regard as well, but while Bray Wyatt’s in ring has been spotty overall, he’s delivered in big matches against Daniel Bryan & John Cena. Granted, one of those matches was against Bryan who could have good matches in his sleep, or even teaming with Kane or against Takeshi Morishima, and the other was a Last Man Standing shortcut match, which is sort of like mashing in slow pitch softball and claiming you can hit a major league fastball, but hey, they still happened. Maybe that god awful RAW bout against Roman Reigns was more the fault of Roman than Bray. Who knows. My overall point here is that Bo strikes me as a cute little undercard act (more on this later), and nothing more. Big Titus strikes me as a killer who can have a believable top program with somebody like Cena. And Bo squashing Titus has forced me to dislike Bo even more. I took that RAW match personal, dammit.

Here’s the thing. I like NXT. I really do. It’s so much different than anything else WWE produces, and the flat out tremendous quarterly specials have that old school Clash of the Champions vibe. And i’m not opposed to fun, especially when I understand full well that when I watch WWE, i’m not watching 1989 All Japan. But lately NXT has gotten too cute and is churning out a disproportionate amount of gimmicks that are more suitable for Chikara than RAW. Remember when the WWE stated directive was to only sign talent that had the potential to one day main event WrestleMania? Taking that at face value (even though that’s an extremely silly directive and likely more corporate speak than reality), why on Earth would you saddle these potential “future main eventers” in dead end, prelim level comedy gimmicks like Adam Rose’s Russell Brand routine, Tyler Breeze’s “somebody in Florida saw Zoolander on Netflix” act, The Vaudevillains (which luckily for them might be the easiest to break away from), the pixie dust fairy girl, Becky Lynch’s embarrassingly stereotypical ethnic WWE subtlety hammer SHE’S WEARING GREEN AND DOING A JIG BECAUSE SHE’S IRISH DO YOU GET IT? deal, etc, etc, etc, etc…

I enjoyed Adam Rose, The Vaudevillains, and a few of these other cheesy NXT acts the first time I saw them, and kind of liked them the second time, but by the third or fourth or fifth time most of these gimmicks have run their course. Some may even be impossible to shake the stink off of if the company ever wants to switch gears with these people. It isn’t a good trend. There is room in wrestling for goofy undercard stuff, but NXT is chock full of it right now, and it feels like Wrestling is Full Sail. I’m not sure that’s the best way to utilize developmental. A few less cheeky gimmicks of people trying to pop each other, and a few more ass kickers is what NXT needs.

As for this match, this was the best Adam Rose bout since he debuted the character, and Heath is always very good. I liked it. **1/2

2. R-Truth & Xavier Wood vs Rybaxel – Apparently this is a rematch from Main Event, but I have no context to go off of here because i’m woefully behind on my ME viewing. Is there a company directive to recognize every single pin attempt during a match? It seems like no matter how early in the bout or what the announcers are talking about, the play by play man will always, always stop dead in his tracks to yell “COVER AND A KICK OUT!” or “Truth goes for the cover BUT AXEL SURVIVES!”, which I find odd since WWE commentary is so big picture narrative driven and not at all about calling the action. Basic tag structure here, with hot babayfaces runnin’ wild early, leading to a big Woods dive (cue commercial!). From there, it’s the heel control period, with Truth as the BIP. Woods was great on the hot tag, but there was a sloppy spot where Woods went for the Honor Roll, Ryback caught him & planted him, but Ryback sold the damage. This confused the announcers, too. Ryback eventually hit the Shellshock on Woods for the win. The match was fine. Woods really stood out. **1/4

The show wraps up with the traditional joined in progress RAW main event. Despite the lack of Titus, I really enjoyed the matches this week. The lack of the usual short & sloppy Superstars divas match really helps when you are dealing with a two match show. 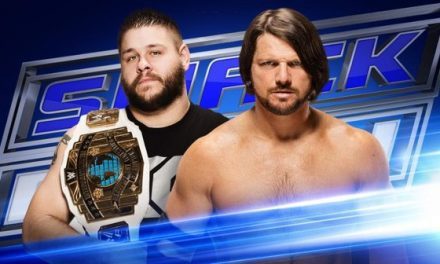