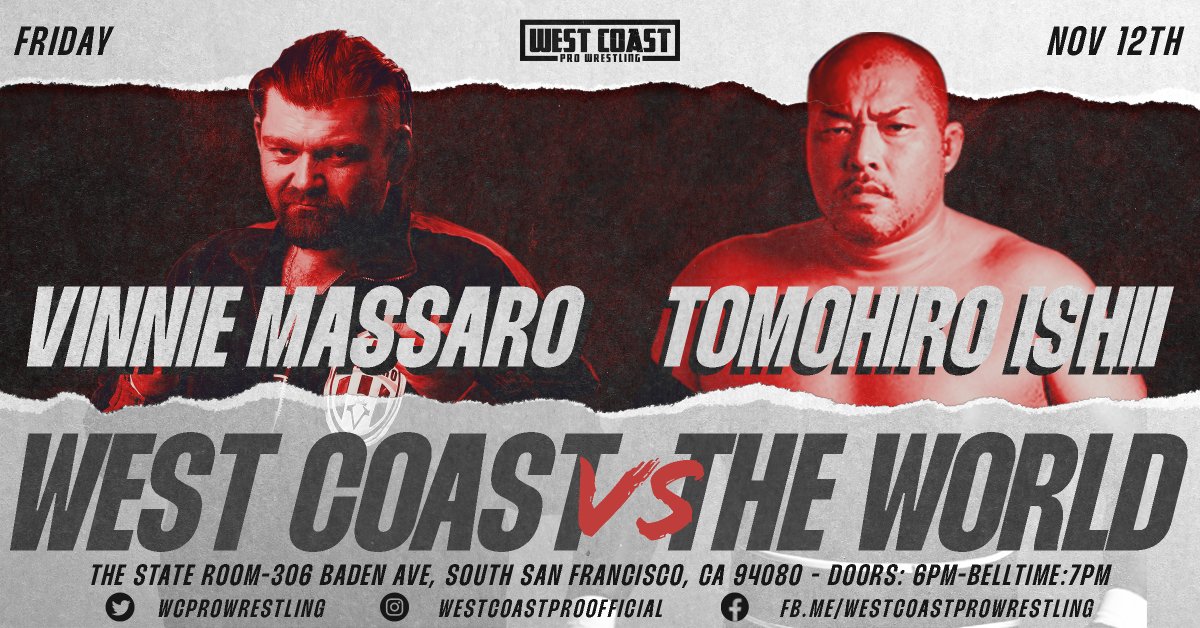 Back in August, Titus Alexander turned heel by costing Starboy Charlie the West Coast Pro Championship when he interfered in his match against then-champion Alexander Hammerstone. After the bout ended, Charlie was jumped by Titus and his father “Big Ugly” JD Bishop. Jake Atlas came out next to make the save in a really hot angle, setting up The Ugly Dojo(Titus and Ugly) vs Charlie and Atlas. The idea was simple, Titus had been stuck in undercard scrambles, while Charlie was getting main events and flights to GCW events. This feud was going to elevate both wrestlers.

That match never ended up taking place. Within days, Jake Atlas would retire from pro wrestling and Big Ugly tore a bicep while training, putting him on the shelf. The tag was turned into a last man standing match between Charlie and Titus, with Charlie getting the win.

That brings us to this show. Originally this was a continuation of the snake-bitten Titus/Charlie feud, with both guys bringing enforcements. Unfortunately, Starboy suffered a horrific leg injury and will be replaced by 2021 Young Lion’s Cup winner Juicy Finau (who ironically was a replacement for Brooke Havok after she suffered her own horrific leg injury), pretty much ending the feud before it really had a chance to get going.

Alexander has been on fire since returning from the Covid break, receiving bookings from Defy, Prestige, and LA Fights. As a heel, he has shown a lot more charisma than he had previously, and has become a lot more confident. In WCP he is in a weird spot, too small to be big, but too big to be small, by that I mean he hasn’t been elevated enough to be in main events quite yet because of the way his feud fell apart, but he is also above doing random undercard matches at this point. It’s going to be interesting to see how WCP handles him.

Even though this match was originally built around Titus and Charlie, West Coast Wrecking Crew and Reno Scum being on opposite sides is a pretty big deal, and if the company decides to introduce tag titles at some point, this match could have big ramifications down the line. Prediction: Titus and WCWC

Two of the more eccentric personalities on this show, Tresario with his “Red Snapper” gimmick where he twitches and is ready to snap at a moment’s notice, and Mr. Iguana being well… an Iguana. If there is one match on this card that has a chance to add some comedy, it’s this one.  Prediction: Tresario

Levi Shapiro has been my MVP since WCP started running shows again, which is kind of funny, because up until a couple of months I thought he kind of stunk. Levi spent years in a tag team called The Classic Connection, which was essentially a vehicle to get Brian Zane promo time. I never thought Shapiro could be a serious wrestler, let alone a pushed one. It has taken him a long time to shed his goofball persona, but he has finally gotten to that point. Yuya Uemura is a guy everyone thinks will be a star, but is still finding himself, and is yet to show the fire and superstar charisma he showed in New Japan.

Of all the matches on this show, this is the one I’m most curious about. Levi needs a strong babyface to work with, and Uemura needs a strong heel to get the most out of him. The result of this match will tell a lot about the WCP/NJPW relationship. Will New Japan allow their Young Lion to take a loss? A win will likely vault Shapiro (who is on a seven-match win streak going back to 2019) to a title match against AJ Gray(assuming he defeats Taurus), a loss may slow that down for a couple of shows. Prediction: Should be Levi, I have a feeling NJPW won’t let that happen. Prediction: Uemura wins this.

Sandra Moone has wrestled on the last couple WCP shows, and to be completely honest, I still have no idea if she’s any good. In her debut she wrestled Jordan Blu in Jordan’s sixth ever match, which was as brutal as you probably think it was. in her second match, Moone was completely outshined by a debuting Madi Wrenkowski(who actually replaced Nicole Savoy), who gave a superstar performance.

Both of Moone’s opponents will be making their WCP debuts. Nicole Savoy is a former SHIMMER champion and has Stardom tours under her belt, she’s also a staple of the NorCal scene and has been a part of APW for years. Masha Slamovich has extensive Joshi experience, working in WAVE, REINA, and Diana early in her career, and spending several months in Marvelous during the pandemic training under the legendary Chigusa Nagayo. Prediction: I’ll be rooting for Masha, but Moone takes this one.

The name of this show is “West Coast VS. The World,” which certainly applies to this match. This is the first WCP show with talent from Mexico. I’ve seen dozens of Horus matches in person at PWG shows over the years, and he is as solid and reliable as it gets for a midcarder. I’ve seen a lot of Karl Fredericks between APW and WCP, but I’ve never seen him wrestle anybody like Horus. Most of the Fredericks matches I’ve seen have been slugfests with NJPW Strong affiliated wrestlers, Fatu, or Reno Scum. It’s going to be fascinating to see him wrestle a luchador, and to see how he adapts his style. Prediction: Fredericks

With no in-house wrestlers sufficiently built up to the point to where they can be considered credible challengers yet, AJ is instead defending the West Coast Championship against some of the top names in independent wrestling. Last month he defeated Davey Richards in a pretty tremendous match, this time he puts the belt on the line against a debuting Black Taurus. A big part of AJ’s offense is hard chops and slaps, I can’t imagine he will be able to get a good sound on either with Taurus’s face and chest covered. This is your proverbial “B-level” title match, where there isn’t a realistic chance of a title change happening. Prediction: AJ retains.

Back before West Coast Pro was a thing, and we were in the dark ages of NorCal wrestling, there were three big time prospects carrying the scene; Jacob Fatu, Karl Fredericks, and Jeff Cobb. Obviously, Cobb got his start in Hawaii, but really made a name for himself when he made the move to CA, making All Pro Wrestling his home promotion. This will be his WCP debut, but it feels like a homecoming, and it’s pretty cool that we’ve come full circle with all three of the APW trio together again. Despite the nostalgia, I’ve never been as high on Cobb as other people. I like him, but I’ve always thought he lacked that killer instinct, and his matches don’t escalate enough. That’s changed with his run in New Japan, he seems to have found that extra gear that he’s been missing. Prediction: Cobb

If this was any other time or promotion I would rip this match to shreds.

On the surface this is the same old shit that Bay Area has done for the past two decades; legend gets booked, works local vet(doesn’t matter which one just needs to be safe), legend beats vet, locker room comes out to give standing ovation. This kind of booking has been a problem for as long as I can remember in the NorCal wrestling scene, nobody really benefits, the vet doesn’t need the match and is inconsequential, and the young talent is permanently stuck on the undercards since they never get these spots.

HOWEVER… that is not the case with this match, and there are a couple of reasons for that.

First, this is not a situation where Vinnie is just a warm body. As exciting as it is to see Tomohiro Ishii in a tiny venue that looks like a fake Mexican village, this is just as much about his opponent. Over the past few shows, Massaro has started to drop the gimmick of “guy who eats pizza,” and has become more serious, even getting actual wrestling gear. His story is he’s a man whose contemporaries have passed him by and moved on to bigger things while he’s hanging around Northern California indies. Vinnie desperately wants to prove he isn’t a joke and laid out a challenge to anyone from New Japan, which was answered by Ishii. Massaro is putting in the best work of his career right now, and this actually feels well earned, and because West Coast Pro has built a lot of goodwill with their fanbase, and have actually built up their upcoming wrestlers, we don’t need to worry about the vet taking up one of their spots… which is a new concept to this scene. I expect Vinnie to take the loss is what will probably be the match of his career, and I have a feeling this kicks off a big babyface run for him. Prediction: Ishii 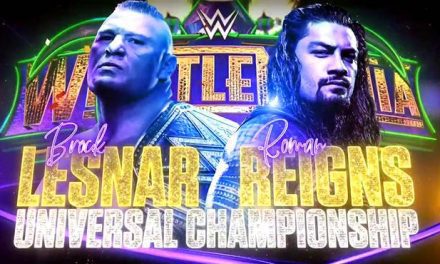 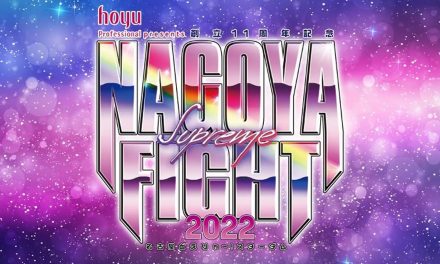 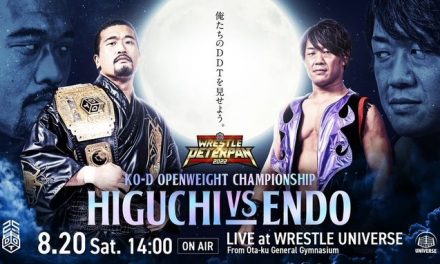