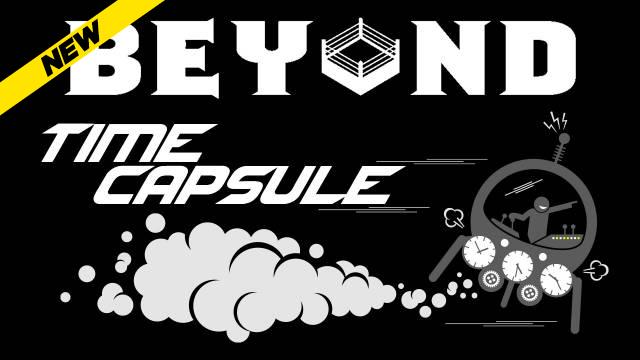 “Mistakes are always forgivable, if one has the courage to admit them.” – Bruce Lee

Time Capsule is meant to serve as a tribute to Beyond Wrestling’s past and history, although, aside from a few brief mentions from the ring announcer, there is very little of that theme that peaks through on this card. This is instead what I like to call a ‘baseline indy show’ – matches with talents I’m mostly unfamiliar, and go into with far little by way of expectations, and recipricolly, the card delivers to that same level of expectation. This show lacks the benefit of ringside commentary, which means each match relies entirely on the in-ring performers to convey their stories.  This is a dynamic that doesn’t do Time Capsule any favors, or helps do any of the lifting to tell this show’s story.

Dave Cole goes by the sobriquet ‘Psychedelic Warrior’, and FACADE the ‘Neon Ninja’.  Perhaps then it’s done in the ironic voice in both their cases, as the match felt slowly paced and lacking urgency.  Likewise, the technique employed was neither eye-catching nor innovative, so there was nothing that felt neither psychedelic, nor neon in this opening contest. The conclusion of the match felt like it came out of nowhere, but I can’t say that it arrived too soon, nor that out of two choices that turned in a somewhat uninspired performance, that the wrong contender won. **¼

After seeing FACADE the match before, Herxog’s arrival to the ring started to give me impressions of just what sort of promotion Beyond Wrestling is trying to be, and it’s an ambitious approach.  I’m willing to give outlandish gimmicks a chance, however, I need there to be at least the potential of talent or charisma backing that gimmick.  To give Herzog credit, his presentation seemed to resonate with some of the crowd present, even if it didn’t land with me.

As a viking, or cave man, or some sort of savage – Herzog starts the match overpowering the smaller Gary Jay, whose look I can best describe as ‘concave’. Although Herzog holds the early advantage, his character is an imbecile, a la George the Animal Steele.  So this gives Gary Jay the opening to turn the tables, get a sloppy low drop kick to the back of the head to stun Herzog, and earn the pinfall.  **¼

One of the few matches that called attention to the theme of honoring the roots of Beyond Wrestling, the match opens with Eric Corvus criticizing Dan Barry for representing his current gimmick (it was jorts and a hawaiian shirt – I don’t know what that gimmick is supposed to be, but by Barry’s admission, it’s the only one he’s ever made money with).  Barry responds by stripping a layer, to reveal a t-shirt and tights.  Whatever, I guess it means something to Beyond hardcores.

This match is fine, in that nobody made any mistakes.  But the ring work was uninspired and ultimately left no impression. I suppose I was surprised, in that my gut feeling was a Corvus victory, but Barry would earn the win and advance to the main event.  **¼

The second, and last match to genuinely acknowledge Beyond’s history, Jefferson Saint spends his entrance and introduction reciting the litany of his accomplishments.  This is simply an ironic prelude however to a roll-up pin by Anthony Stone to end the match as quickly as it started. *

After four straight lackluster matches, this tag-team offering was a marked improvement from what preceded it.  The fact that Maluta possesses some level of refinement helped this match stand out during the show. JAKA was rusty but still has a great look, and in concert with Maluta, there’s clear chemistry between the pair.

Nasty Russ and T-Money served their roles well.  Russ was able to bump and sell, while possessing the speed needed to keep up with Maluta and help him look good.  T-Money had believable power and didn’t try anything outside of his skill level.  As the Island Kings scored their victory, I felt that I didn’t hate anything I saw, and had fun.  All I could really ask for.  ***

Another match that was solidly worked and told a story bell-to-bell, this was my singles match of the evening. Lou Gotti was the match’s athleticism and power, and Darius Carter was the cruel ring technician.  The contrast in styles worked, and helped enhance the match overall.

Lou Gotti had the better of Carter early on, but after weathering the initial offensive storm, Darius turned the table with technique and opportunistic sadism. As the closing stretch progressed, a Carter win seemed to become more and more certain. But despite what may have been a predictable finish, Lou Gotti and Darius Carter executed their performances well and didn’t expose themselves by going outside of their lanes.  The result was the match that earned the best fan reaction of the night. ***

This match featured, perhaps, the most recognizable workers out of any on the show.  However, this contest did nothing to accentuate any potential star power that either had to bring.  The match that Suge D and Allysin Kay chose to craft was an amateur-style back-and-forth exhibition between the pair.  The story to evolve was that as Allysin began to figure Suge D out, he would become a bit more frustrated and slowly, incrementally, ratchet up the intensity.

However, what we got was a meandering sequence of one set of holds ill-transitioning into the next. As we saw a series of holds, one got a sense of practice-drills at a wrestling school, with no connective tissue between. It came as little surprise that the match would conclude with what was a simple hammer-lock.  What instead was my take-away, for a match showcasing the fundamentals, the exhibition was that the basics were still a work-in-progress for this pairing.  **½

This was a classic story of the smaller, faster tag team facing the superior size and might of the heels: a classic formula established by the Rock N’ Roll Express.  However, this match takes some of the key ingredients of that formula, without adding the key elements to make it successful. Without asking the insurmountable task for either of the Besties in the World to emulate Ricky Morton’s charisma, there’s never a sense that this team has the actual skill or finesse advantage over Faith in Nothing.

The match is spent with Nothing and Page alternating on one-sided beatdowns on members of the Besties. There are a few hope spots and bursts of offense from the Besties in the World, but there’s never any cumulative sense to it, advancing them any closer to victory.  So when Faith in Nothing earns the dub, there’s nothing at all surprising about the outcome. **½

The four qualifiers from the opening of the show now face one another for the right to a title shot against the IWTV Champion. It wasn’t a good sign that none of the qualifiers were a shade over 2 ¼, nor that 3 of the 4 competitors seemed to have gimmicks that could be distilled down to ‘hipster beard’. The signs were to be believed as this was a Main Event that certainly underdelivered.

In an elimination-style match, one needn’t fall into the silly multi-man tropes of reducing to two people in the ring at any given time, at all costs. With an elimination match, there’s no need to interrupt pinfalls, since the match doesn’t end til there’s only one person standing – which opens up the possibilities for sensible multi-person spots happening in concert.  That wasn’t the case in this match.  There were never more than two people in the ring at any given time, and the eliminations came fairly rapid fire. The show ended as it began, Dave Cole standing tall.  But with the sense that he didn’t earn much, despite the stated stakes. **

In the main event, Dan Barry wore a t-shirt that read ‘Aggressively Average.”  Perhaps it’s a bit sad that Dan Barry is so self-aware, that he chooses such a moniker for his gimmick.  Perhaps it’s even sadder that ‘Aggressively Average’ was a bar that Time Capsule would have had to aspire to achieve, and subsequently fail to do so.  The main event saw workers and staff surround the ring to provide pops and reactions to the final contest.  This was a sheer necessity because the crowd was dead, and was for most of the show.  For a show that was meant to be a tribute to Beyond’s history, I was left feeling that the promotion’s best days are in the past.