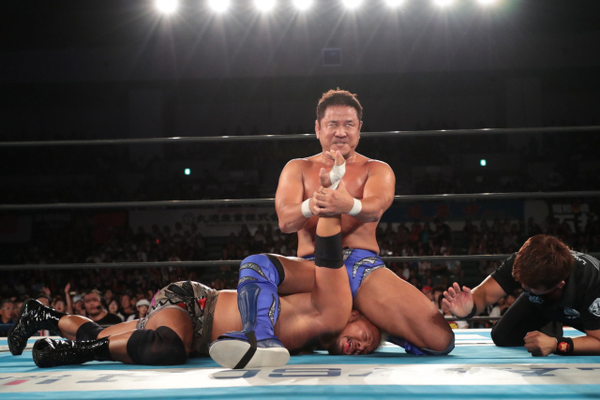 It’s the end of July, which means we’re about to reach the halfway point of the G1 Climax. There have been plenty of fantastic matches thus far, and we’re certainly going to get some more as August quickly approaches. Night 9 was the fifth show for the A Block, and the standings were still pretty tight coming into the event. Tetsuya Naito, Zack Sabre Jr., and Hiroshi Tanahashi were tied at the top with six points each. Behind them, a bunch of guys sat in the middle of the standings with four points each, with YOSHI-HASHI and Yuji Nagata sitting at the bottom with two and zero points respectively. Before diving into the block matches, here are the results from the undercard tag team bouts that took place:

I did check out a few of them, but the only one that I would say is worth a watch is the LIJ/Young Lions tag. It was only about five minutes, but it was really enjoyable. Kitamura continues to look a freak of nature (taking the fight to EVIL at one point), while Kawato, once again, showed a ton of fighting spirit, despite coming up short.

After initially getting off to a 0-2 start, Togi Makabe surged back with two straight wins to get to a 2-2 record. Meanwhile, Yuji Nagata had yet to score a victory, and a loss here would eliminate him from contention. This was a relatively solid match, but it was by far the weakest of the tournament for Nagata. I could actually say the same about Makabe as well (I would rank his bout against Bad Luck Fale on Night 1 over this one). While this was technically fine, the first half of this match just wasn’t that interesting, as Makabe pretty much dominated. Once Nagata started make his comeback, the pace picked up a little bit. The final two minutes or so were quite good, as Nagata (who got busted open slightly) nearly had Makabe beat on a few occasions. However, Makabe eventually prevailed after hitting his King Kong Knee Drop, getting his third straight win, and officially eliminating Nagata from the tournament. ***1/4

Coming into this show, these two were both part of that “middle of the pack” group with four points and 2-2 records. It’s fair to say that Bad Luck Fale has been the worst performer in the A Block thus far. While he hasn’t been terrible, the other participants in the block (even Togi Makabe) have been blowing him away. Fortunately, this match ended up being Fale’s best outing in the tournament thus far, and it shouldn’t be a surprise to anyone that it came against Kota Ibushi, who has been one of the standouts of the A Block thus far. Fale dominated the first few minutes, as he went after the legs of Ibushi in an attempt to ground him.

The momentum changed when Ibushi hit Fale with an impressive delayed German Suplex, and this led to a brawl in the crowd that ended with Ibushi hitting a moonsault off a balcony onto Fale. Ibushi hitting moonsaults from high places is something that will never get old, and the crowd was really behind Ibushi. Unfortunately, Ibushi made the mistake of trying to lift Fale up for a piledriver, and this ended up leading to his downfall. Fale connected with the Grenade, and then hit Ibushi with the Bad Luck Fall to score the win. Once again, Ibushi had another unique match in this tournament, while Fale looked dominant in victory. This was a ton of fun to watch from start to finish. I might be a little high on this one, but I thoroughly enjoyed it. ***3/4

These two met back at Sakura Genesis in a bout that saw Goto overcome Suzuki-gun interference to retain his NEVER Openweight Title. This wasn’t as awesome as it could’ve been, but it was still a very good match that clocked in at just over ten minutes. Zack Sabre Jr. relentlessly worked over the arms of Goto in an attempt to get the submission victory, but Goto never gave up. There were some great exchanges and counters throughout this one, and fortunately, the only bit of interference we saw occurred very early when Goto got tripped up by El Desperado (he never really got involved beyond that moment).

In the end, Goto scored the win after nailing Zack Sabre Jr. with the GTR. I know Kota Ibushi & Tomohiro Ishii have both been getting high praise for their performances thus far (as they rightfully should), but I believe Hirooki Goto & Zack Sabre Jr. also need to be lauded as two of the more consistent performers in the tournament up to this point. Every time you see them on the card, you know they’re going to be in a good match (bare minimum) and they deliver every time. ***1/2

Here we have two guys who have really gone in opposite directions since the opening night in Sapporo. After losing in his first tournament bout to Zack Sabre Jr., Tanahashi won his next three matches. Meanwhile, YOSHI-HASHI picked up a win over Yuji Nagata on the first night, but went on to lose his next three matches. As for this particular encounter, it was technically sound, and the fans seemed to be into the match (YOSHI-HASHI is from Togo, which is near Nagoya, where this show took place), but it just seemed to be lacking something. This just seemed to be lacking a bit of drama, and came off a little flat, at least for me. Additionally, while there were definitely some good moments, there were a few rough spots as well (YOSHI-HASHI appeared to botch a running neckbreaker at one point).

Again, I’m not saying the match was terrible (it was far from that), but it was just missing something. You’d think that these two would be capable of putting together something better. While it was still solid as a whole, it was far from memorable. Tanahashi got the victory after hitting YOSHI-HASHI with the High Fly Flow. ***1/4

These two have had a number of meetings over the past few years, and they’ve put on fantastic matches every single time. It doesn’t matter if they’re fighting over a title (IWGP Heavyweight Title, NEVER Openweight Title) or if they face off in a tournament setting (the New Japan Cup, the recent IWGP United States Title Tournament in Long Beach and now the G1 Climax). Whenever these two have a match, you know you’re going to witness something special.

Even though this particular encounter was far from their best, it was still awesome, and easily the match of the night. The biggest critique one could make about this one is that it got off to a slow start, with Naito working over Ishii’s neck, which isn’t even a great idea to begin with, since Ishii has almost no neck. Anyway, the slow start did hurt this one a little bit, but at the same time, I think it makes sense. If you’re wrestling Tomohiro Ishii in a one-on-one situation, the last thing you want to do is wrestle Ishii’s style of match, because it won’t end well (just ask Okada). In that regard, Naito intentionally slowing down the pace made perfect sense. Again, it did hurt the match slightly, but it made sense from a psychology standpoint (at least that’s how I saw it).

Of course, Naito’s strategy would’ve worked a lot better if he didn’t focus on the neck of Ishii, but I digress. The action did eventually pick up in the second half, where it turned into your typical Naito/Ishii battle, with some incredible exchanges and amazing offense. There was a particularly good moment towards the end of the match when Ishii countered the Destino with (what looked to be) a stunner, and this eventually getting the win after hitting a brainbuster. Seeing Ishii win in the main event was so odd, because we usually get these big end-of-the-show promos, but Ishii just left after his big win. He’s a man of few words, but that’s ok, because he lets his actions in the ring speak for him. ****1/4

Night 9 officially marked the halfway point for the A Block, and as a whole, it was a very solid show, but not spectacular. It’s not that there were bad tournament matches (most of them ranged from good to very good), but without that great main event, which saw Tomohiro Ishii & Tetsuya Naito add another awesome match to their series, this would’ve been the worst show of the tournament so far. Kota Ibushi had a really good bout with Bad Luck Fale (the best bout of the tournament for “The Underboss), and Hirooki Goto beat Zack Sabre Jr. in a very enjoyable encounter. The other two tournament matches, Makabe vs. Nagata & Tanahashi vs. YOSHI-HASHI, were both solid, but nothing more than that.

The results from this show leave the A Block Standings in an interesting spot. Hiroshi Tanahashi is now the sole leader of the block with 8 points and a 4-1 record. This is a bit of a surprise, at least in my eyes. After Zack Sabre Jr. defeated Tanahashi on Night 1, most of us figured he would lose another early match before going on a big run of victories before the A Block Finals against Naito. However, that’s not the case as it stands. Usually, when someone is leading the block at this point, it means that they’re due for some losses coming up. Now I don’t think Tanahashi is going to go on a losing streak, but he’s probably going to lose at least one more match before he faces Naito. Meanwhile, the results of Night 9 mean that there’s a massive logjam right behind Tanahashi, as six other competitors are now tied at six points. It’ll be interesting to see who is able to break away from this pack.