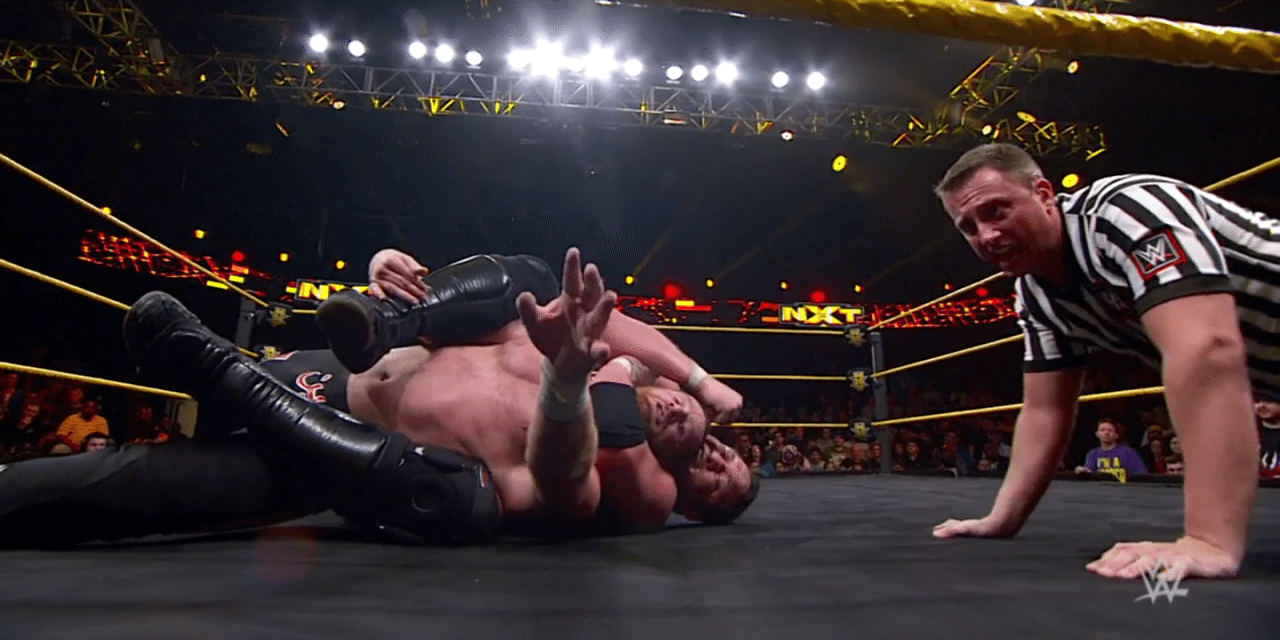 Just one match tonight on a very special WWE NXT: Sami Zayn vs. Samoa Joe in a 2 out of 3 falls match to determine the No. 1 contender for the NXT Championship to be decided at Takeover: Dallas against Finn Balor in a match that will be arguably bigger and almost certainly better than the WrestleMania main event.

Not to mention the glorious return to Full Sail University.

For the sake of not having a wall of text, we’ll break the individual falls down as separate segments. 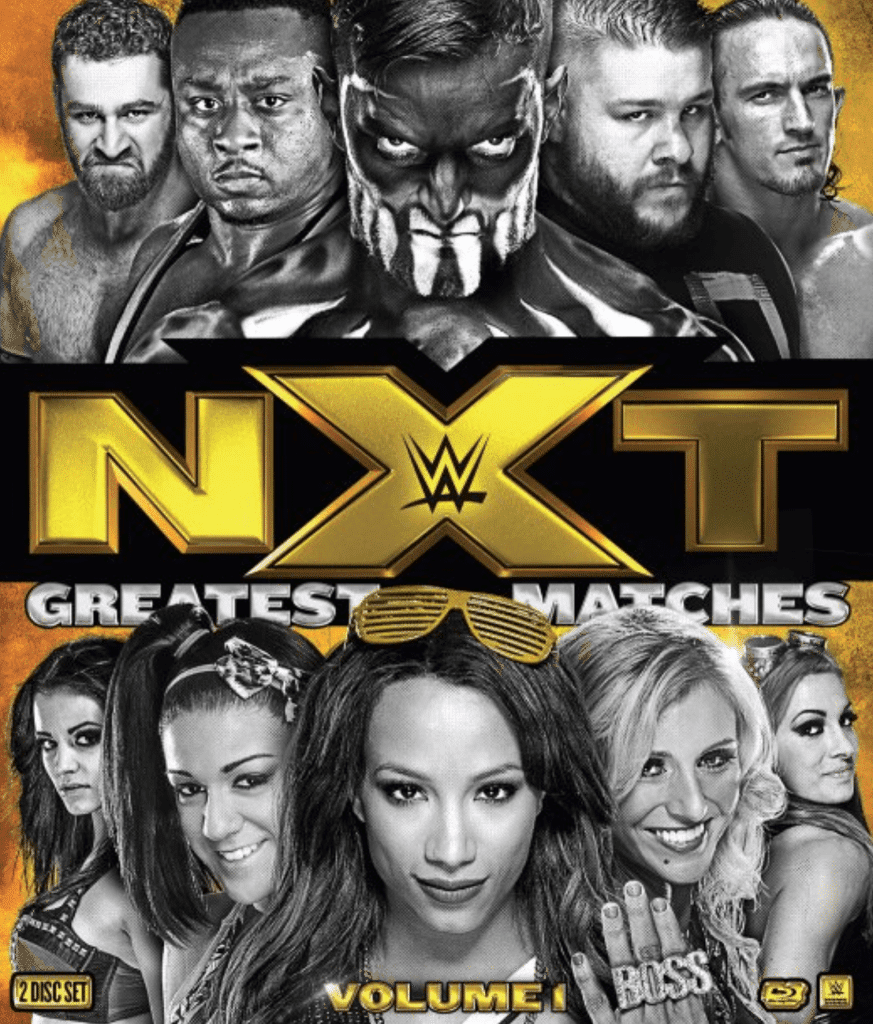 WWE’s Best Authority Figure (ever?) William Regal opens the show to address the Baron Corbin-Austin Aries situation. Regal said he won’t be suspending Corbin at the behest of Aries, but Aries did request a match with Corbin. Regal made the match official for Takeover: Dallas.

On his way out Regal restated the importance of tonight’s 2 out of 3 falls match and how it would put to rest the inconclusive finishes we’ve had surrounding the No. 1 contendership.

Tom Phillips and Corey Graves take the audio reigns an tell us that American Alpha, Bayley, Asuka and so many others will be on the show tonight. But we know better, don’t we?

WWE brought the stars out for NXT tonight. Sasha Banks, Hideo Itami and Michael P.S. Hayes are sitting ringside and VOW favorite Mauro Ranallo is taking in the night’s festivities with Larry Zbyszko and Adam Jones. Obviously they’re looking to make tonight feel big, and having such WWE luminaries around makes the match feel big. Why else does UFC put literally every C-list celebrity that comes to the show on camera?

Before we really get into the match, we’ve got to talk about how close Joe’s sideburns are getting to his goatee. Why trim it at this point, Joe? Just let it go to the full chin strap. Samoa Joe has been wrestling like it’s 2006 again, why not let his facial hair live back there too?

The match started exceptionally slow. Both wrestlers spending time wearing their opponent down knowing they were going to need to conserve energy. The pace obviously favored the hard hitting Joe who highlighted the first ten minutes of the match with a short series of exceptionally hard chops, even for Joe.

The first fall of this match also included three (!) commercial breaks in the first 20 minutes of the match, presumably to open up the rest of the hour for longer stretches. The breaks probably helped to deter the largest complaint I heard following the tapings which was the match being artificially inflated for time.

Joe methodically beat Zayn about the head and body while Zayn continued to try and push the pace. Joe cut off every Zayn uprising, including a Koji Clutch attempt.

After coming back from the third (!!!) commercial break of the match, Phillips and Graves put over the fact that the match was still tied 0-0 and the amount of time that had already elapsed. At this point it was 20 minutes without a fall. Long for a 2 out of 3 falls match, but hardly surprising given the plodding pace of the early going.

Zayn took some control after the third break including moonsault to the outside, but Joe hit the Muscle Buster and got the first fall after more than 20 minutes.

We come back to the opening bell and Joe charges in with a knee in the corner and another Muscle Buster attempt. Where Zayn was once actively selling Joe’s strikes, which are always great, by the opening of fall 2 Zayn was rag-dolling them and selling the accumulation rather than the strike.

Joe continued the onslaught and eventually threw Zayn outside the ring with the hope that he just wouldn’t come back in. He didn’t even chase him out. Zayn, of course, went back to the ring and Joe gave him a boot back out and tossed him into the stairs. Zayn came back again. Joe threw him back out and STO’d Zayn outside the ring. Zayn came back in at the nine-count.

An elbow to the head from Joe woke Zayn up. A series of strikes and a suplex made Joe roll outside – a precursor to a Swanton to the outside from Zayn.

INCOMING! @iLikeSamiZayn will FLY if it means he gets his first fall! #WWENXT pic.twitter.com/GujBz6JyWg

Back in the ring, Zayn countered a clothesline into a Koji Clutch. Joe took the smart route and tapped out before too much damage was done and lived to fight for the final fall.

Samoa Joe def. Sami Zayn to become the No. 1 contender for the WWE NXT Championship

After over-selling all of the matches to come, Phillips has finally admitted that this match will take up the entirety of tonight’s program. If you didn’t know going in that this was going to be the whole hour, you certainly knew after Phillips ran down the rest of the card for the second time during the match.

Zayn opened the third fall with more offense than he had in both the first two falls and capped his run off with his signature DDT on the outside through the ropes; Zayn went back into the ring, but Joe got back in at nine to save his shot.

Joe went for a submission series after countering a Helluva Kick and continued with strikes, seemingly pummeling Zayn towards unconsciousness, until Zayn countered with a Coquina Clutch of his own.

After escaping his own hold, Joe countered yet another Helluva Kick and locked in a Coquina Clutch with one leg over Zayn’s arm so Zayn had just one arm to try to escape with. Zayn, ever the hero, refused to tap but eventually passed out. Samoa Joe and his almost-chin strap are going to Takeover: Dallas for a rematch with Finn Balor for the NXT Championship.

I don’t think this match fit either of the descriptions that came out of the tapings. The match was plodding, but told its own story and had an inventive composition. It was artificially inflated and went far too long for my tastes, but to their credit it felt shorter than the 50-or-so minutes of programming it filled. I really wanted to go over four stars given the setting and the participants, but I just can’t due to the pacing and lack of any real drama. Perhaps that’s a product of the tapings being such public record, but that’s a factor NXT has always had to deal with. ***3/4

Instant classic tonight or not, the Takeover: Dallas card is shaping up to be one of the best in years, and there’s so much more to come.

What do you think about tonight’s match? Let us know in the comments below or head to our always-bustling NXT forum thread to chat about all things NXT.