Talk about shows from the Voices of Wrestling podcast network and argue with us here.
Post Reply
10 posts • Page 1 of 1

Support our sponsor MyBookie! Sign-up today at http://MyBookie.ag using promo code "VOICES" and they will DOUBLE your first deposit. At MyBookie, you play, you win and you get paid.

We have plenty to get to this week as we discuss the huge news of Anthem (parent company of Impact Wrestling) purchasing a controlling interest in AXS TV. We discuss what this means for Impact Wrestling, NJPW on AXS TV and potential Ring of Honor.

Everything the Bucks have done up to this point has made it so discussing them as potentially the greatest tag team is not unreasonable, but I would stick by belief that until the Bucks can prove themselves as a big main event/semi-main event draw on a consistent basis, the Road Warriors remain my pick. This can certainly change in AEW, but it's way too early to say.

The ROH website used to have the old HDNET shows, but Honor Club does not, so I'm guessing those are property of AXS. I'd be curious to see if the rumblings about Anthem wanting ROH too have any heat to them or if it's typical clickbait bs. Anthem, between AXS and the Fight Network, really has a pretty terrible record with regard to treating the employees of their acquisitions well.
Top

There is no doubt, that a young degenerate Joe Lanza who is trying to hustle his bookie to give'em just a few more days and he'll be good for it, never thought he would one day be hocking an online bookie outfit.

The irony was not lost on me.

You're incredibly into those ad reads, too. Like...I want that full bonus every time because I know you believe in this product. I'm signing up, promo code VOICES. Lets go man. All in on the Bucs tonight +7. Lets go.
Top

RE: Bodies in Motion guy

Gallade? Any relation to the Pokémon, Gallade?

For what it's worth, I thought the whole "heavy grappling is the easiest style of match to pull off" dialogue was the most fascinating part of last week's show. So don't feel too bad, Mr.Lanza...you did MORE than good considering you were supposedly grasping at straws.
Top 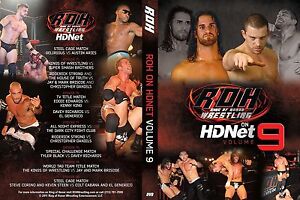 Question. Is the footage in HD or SD? Someone told us HDNet owns the HD footage, ROH owns the SD footage. Seems like an odd deal.
Top

Question. Is the footage in HD or SD? Someone told us HDNet owns the HD footage, ROH owns the SD footage. Seems like an odd deal.

So, here's a something I wanted to touch on...

In reference to Anthem and Fight Network, people keep saying variations online on 'Oh they gutted Fight Network when they bought it, oh this whole AXS thing wasn't a surprise, oh, they leave companies worse than when they find them'. Which to me, feels a little self-centric, based on wrestle-twitter being heavily based around podcasts and podcasts following?

Because yeah, they got rid of Fight Network Radio, the parent division for Live Audio Wrestling. They cancelled like sixteen or seventeen podcasts and didn't let the guys do sendoffs, which is definitely a no-go.

But that seems to be about it, barring a few freelance MMA analysts getting shown the door. A bunch of niche podcasts on a niche network, at a time when podcasts were starting to become over-saturated. All owned by a company that just bought a technically more varied product with a large archive for their use. I might just be a podcast neophyte or something, but the replayability of 17 different podcasts doesn't feel as high as a full on wrestling library, be it TNA or otherwise.

If Anthem had to make the tough decision of cutting costs and cutting ties while they turned Impact around (and this was at a point where Jeff Jarrett was involved, suckling on the money teat of Asper), then cutting a bunch of podcasts (many of whom seem to have turned around and relaunched as independents) doesn't seem like a terrible business decision. It feels like the correct decision to make, albeit a gamble given Impact's spiraling issues at the time.

Am I crazy? Are people who respond negatively to the Fight Network Radio closure a little sensitive because a lot of them are into podcasts or are on podcasts or are friendly with the LAW people?
Top

The Bucks are so divisive I almost can't see a future where people will be able to balance personal opinion and overall impact/influence and judge them on somewhat of an even keel. Bias is inevitable in subjective discussions but to me, the Young Bucks are unquestionably influential but worthy of discussing as an all-time great but they really get people's heckles up, so I doubt that discussion can ever be had. It's really interesting because that was their gimmick, right? Pissing off old-timers and making $$$ with it. But now it's not really their gimmick, their gimmick is closer to their real personas, which is more humble, but they still have that cocky edge that pisses people off. Case's article wasn't provocative but it provoked the hell out of some people.

The Bodom/Samuels/ref saga is messy, and it's a real downer what BritWres has become. It used to be hyped up cards every week and foreigners lamenting they couldn't be there live. Now it's a new scandal every week, WWE-esque fucked finishes and new scandals sprouting up or old scandals being rehashed because old dirt comes to light. The wheels are coming off the bus.
Top
Post Reply
10 posts • Page 1 of 1