Well, I have been wanting to get into this company, but reading this makes me think it's not a good idea.
Hit me up on Facebook, all I discuss is wrestling- Adam Leavelle (Wrestling Done Right) and at www.wrestlingdoneright.com
Top

With the way W-1 has reworked itself lately I believe it can continue to exist in its present state. The roster is mostly very young dojo guys who wouldn't have much in the way of prospects elsewhere if they were to leave and probably get paid very little. They run very few shows. I expect some of the more big ticket guys like Soya and Kono to go freelance. In spite of what I said previously it's usually a bad idea to bet on a Japanese wrestling promotion going out of business.
Top

Isn't Soya already freelancing? Either way, would love Soya back in AJPW full-time and maybe Kono to NOAH. Hino could go to either AJPW or NOAH, and I'd be happy.

That said, I'm very supportive of this youth movement W-1 is pressing on with. it's a little bit more drastic than what AJPW had to do, and certainly AJPW had more significant draws than W-1 did by the time W-1 made the switch, but I think it'll work out well in the long term.
Top

Wooooo almost 1,000 for the last Korakuen, WE AIN’T DEAD YET!
Please Follow me on Twitter.
I need it.
Top

I watched a handful of matches from Pro Wrestling Love in Yokohama and the show directly after that and came away impressed. They have a nice collection of young talent on the roster (Takanori Ito and Jiro Kuroshio are two standouts for me personally) and I'll definitely be working them into my wrestling rotation.
Top

Where is a good place to start watching this company? Preferably this year as I don't have a ton of time to watch from way back.
Hit me up on Facebook, all I discuss is wrestling- Adam Leavelle (Wrestling Done Right) and at www.wrestlingdoneright.com
Top

Pro Wrestling Love in Yokohoma. Their biggest show of the year and a good sampling of what the promotion can offer.
Top

I'm gonna have to speak on behalf of W-1 for a moment. A friend made me watch a couple of Korakuens from last year as well as a random Cruiserweight title match and I was frankly very impressed.

I like how this is a company that mixes a lot of new, young talent with the older freelancers and such. It's like a Lion's Gate you can actually sink your teeth into, because sometimes the younger dudes actually goes over. Their young talent isn't all amazing, so you will definitely catch some botches and "what was that?" moments on the (quick, in-and-out, no time to make sandwiches) undercards. But then there's guys like Jun Tonsho (whose Cruiserweight title challenge I highly recommend!), who just show a lot of promise and talent already.

The November Korakuen featured the main event of Kumagoro vs Ashino, the champion. People have sung Ashino's praises a lot already, but I will reiterate he is a huge badass with the kind of crispness I'd expect from a veteran, not a guy less than 3 years into his career. What was awesome about this match was that these two debuted together, came up together through the dojo, and are W-1 guys through and through. So there was that "peer rivalry" story developed throughout the match, Kumagoro showed his power and his size, and Ashino his amazing targeting and picking apart of a bodypart. The match had just this energy throughout that never died even when they were largely just working it around submission work. Kumagoro was great, and you could tell these two guys had a lot of chemistry together. I will gladly see a rematch, with perhaps Kumagoro finally overcoming the young ace. The fact this company got two rookies into this position in under three years is really wonderful. Gives you hope for their future.

The semi-main of that show was a hot little Cruiserweight bout featuring a Dove Pro guy named Kenshin something against Yoshioka, the champion. I really like Yoshioka, and this turned into a contest of "give me your best shot", only with stiff kicks instead of forearm strikes or chops. I highly recommend this one, too.

The next Korakuen in December featured a main event of Takanori Ito (Japanese Kevin Owens) vs the champion, and while the match wasn't as amazing as the Kumagoro bout, I did love the consistent, simple but great story they told here as well.

I know maybe max 2 people on this board care but I'm gonna review the February Korakuen regardless.

W-1 is doing a small jr heavy tournament named Cruiser Fes, the show featured some first round matches. Alejandro is a debuting wrestler, a smaller guy with a masked gimmick who seems to be your standard fun bouncy babyface. He did a bunch of fun stuff with Yusuke Kodama in a short match centered around Alejandro's knee getting worked by Kodama. I really liked this. Alejandro picked up the win, and considering he's a new guy who is already involved in some mini angles, I could see him going quite far in this tournament.

MAZADA vs DovePro's Kenshin Chikano was another fun match that had me strongly rooting against MAZADA. Chikano should be featured more, his stiff kicks and his very DovePro look bring me joy. Sadly he did not advance.

The next match was an 8 man tag, mostly used to set up some challengers tag challengers (NOSAWA and FUJITA ...uhhhh) and kick off an apparent storyline with NEWERA's Daiki Inaba getting frustrated with his team. It was fun but messy and didn't really stick in my mind. I hope KumaDoi get something good out of the challengers but it's fucking NOSAWA. Hopefully Kumagoro sentons the heck out of him.

Drunk Andy vs Andy Wu. The clash of Andies. I lost it hearing Korakuen fans call out "Andy!", because, like, which one... This was a good match that perhaps did not entirely live up to my own personal hype levels. It's been a fairly silly undercard feud but I do genuinely like both guys and wonder how they will advance as their careers continue. W-1 roster is generally so young, even though these masked men's ages are unknown, I wouldn't be surprised if they were barely 2 yrs into their careers. This was another match where the Enfant Terribles heel targets a high flying babyface's knee. Wu still manages to pull out the win.

Kaz Hayashi vs Ryuji Hijikata was probably the match of the night despite being barely 12 mins. Kaz is just fantastic, and Hijikata was grown on me the more I see of him. This was just two veterans working a fast-paced, exciting little match. Tons of fun. I need to see more Kaz.

The tag between Tachibana/Ashino and AKIRA/Soya was used to set up Ashino vs Soya. Considering the terrific match they had last year (one of my favorite Ashino defenses thus far) I am looking forward to it a lot.

There was also the rare joshi tag match on this card, Hana Kimura & Saori Anou vs Mika Shirahime & Natsumi Maki. I loved the interactions between Kimura and Shirahime (I think? the lady in white). I think W-1 needs to have any kind of consistency with this joshi stuff. Have an undercard singles match or two on every Korakuen at the very least. Special attractions are fine, but why not build some stories instead?

The main event was good, but fairly unmemorable. I love Ito, but Jiro is just one of those guys I haven't been able to connect with. Still, hard to deny his popularity so putting the secondary title on him is absolutely the right move.

As usual, Wrestle-1 Korakuens are like a comfortable pyjama to slip into after a long hard day at work. It's just an easy watch, always consistent and minimum good, always worthwhile, sometimes with some absolutely gems at the top of the card with the title matches. I really look forward to the next Korakuen.
Top 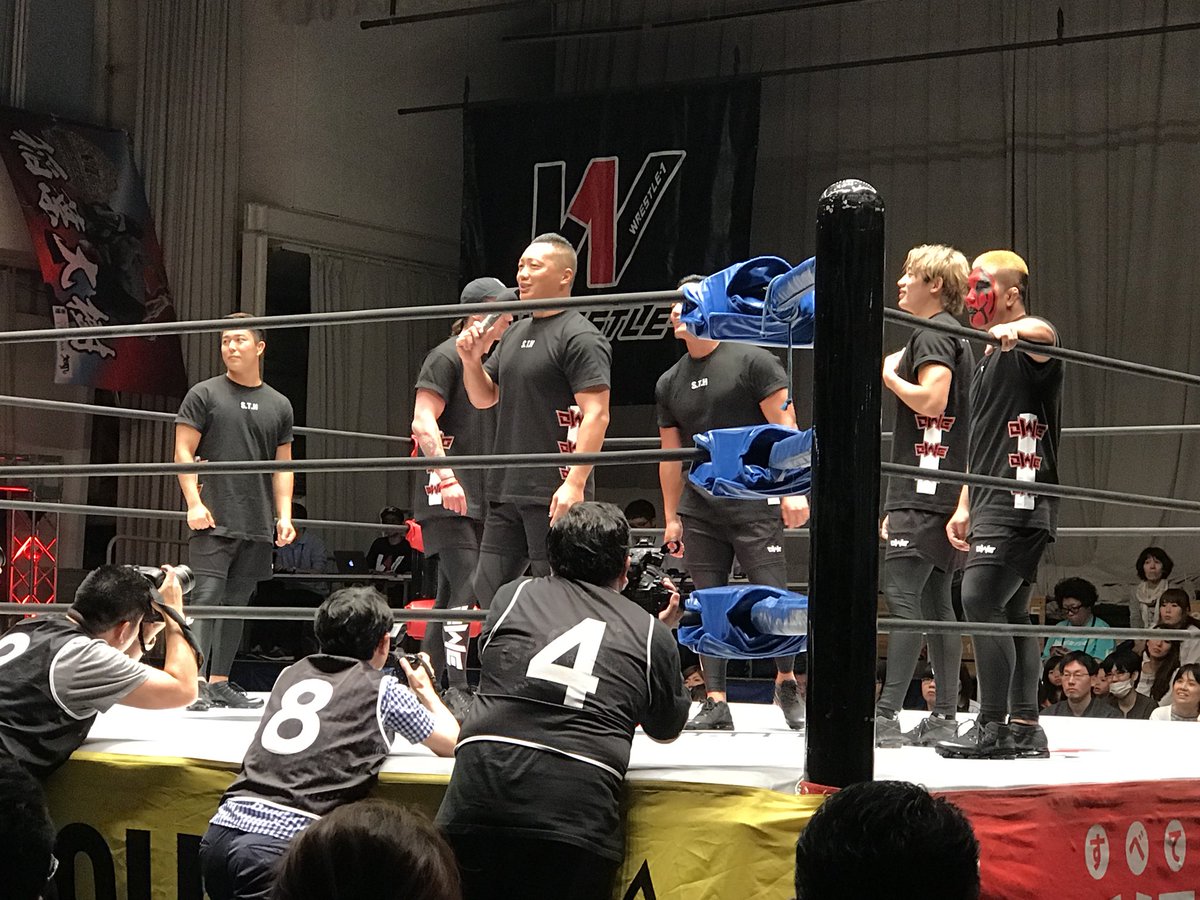 I still need to see these latest shows!

But honestly I want to write about this promotion at length at some point because I think they've been the easiest promotion to watch for about a year now, just excellent stuff all around, and whatever isn't excellent flies by so quickly you don't even notice. No drag on the undercards. But they've long needed that extra something to push them to the next level - and that next level is as modest as sell out Korakuen.

Maybe this OWE collab can do it. Maybe it can't. But I'm excited nonetheless.

And Ashino remains a badass.
Top

Pro Wrestling Love in Yokohama did a great number earlier this month, though who knows if the 1,866 fans are legit or not. The show did have OWE's Strong Hearts over it, plus a Shotaro Ashino vs. Manabu Soya title main event that seems to be their most appealing match. The show prior to that supposedly did 962, which had a tag title main event featuring Jiro Kuroshio and Masato Tanaka against Koji Doi and Shuji Kondo. The Wrestle Grand Prix also did over a thousand, with Strong Hearts on the card and Shotaro Ashino in the main event against Koji Doi.

I'm not gonna go crazy and scream revival, but I'm glad Strong Hearts is putting some eyeballs onto the WRESTLE-1 guys.
Top

They should steal the NOAH ticket gimmick to boost attendances.
Top

Has anyone been tracking those numbers, actually?
Top