Here are the ratings for the Monday Night Wars in my EWR scenario for the full year of 1998. I've included two different types of charts. 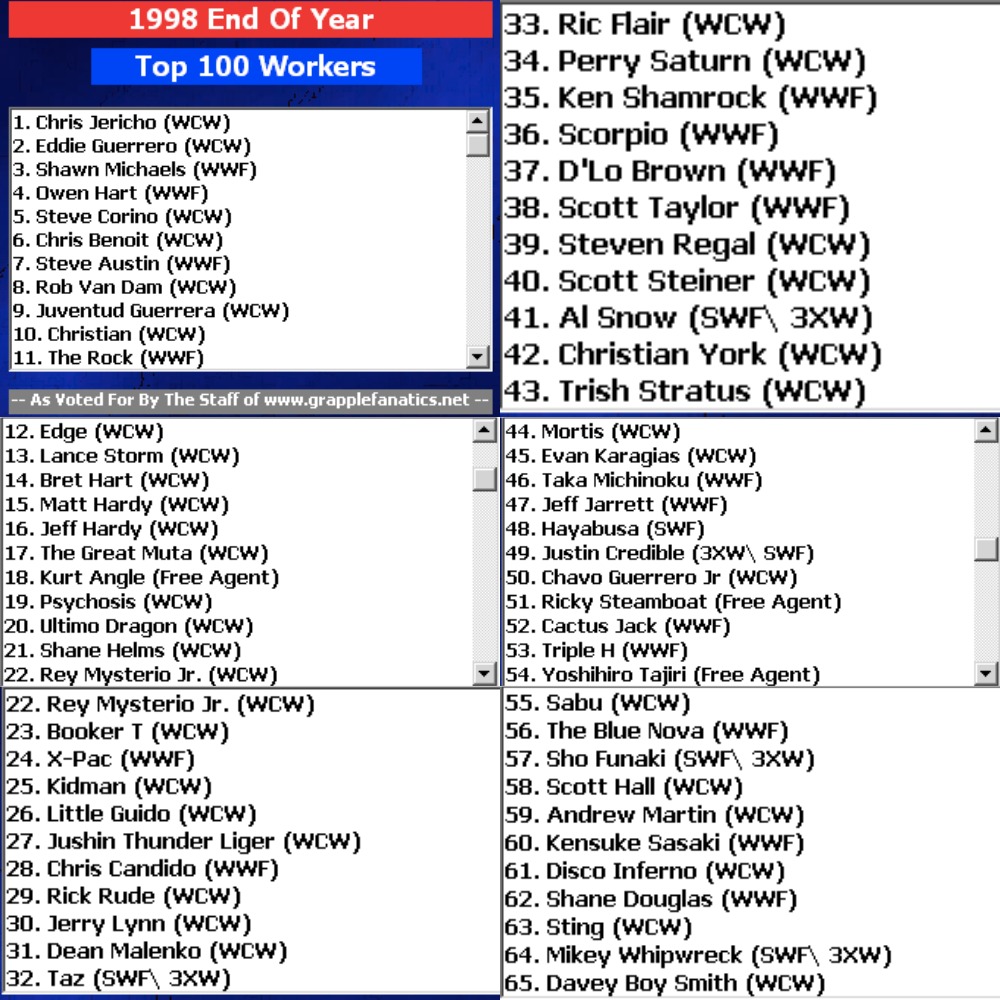 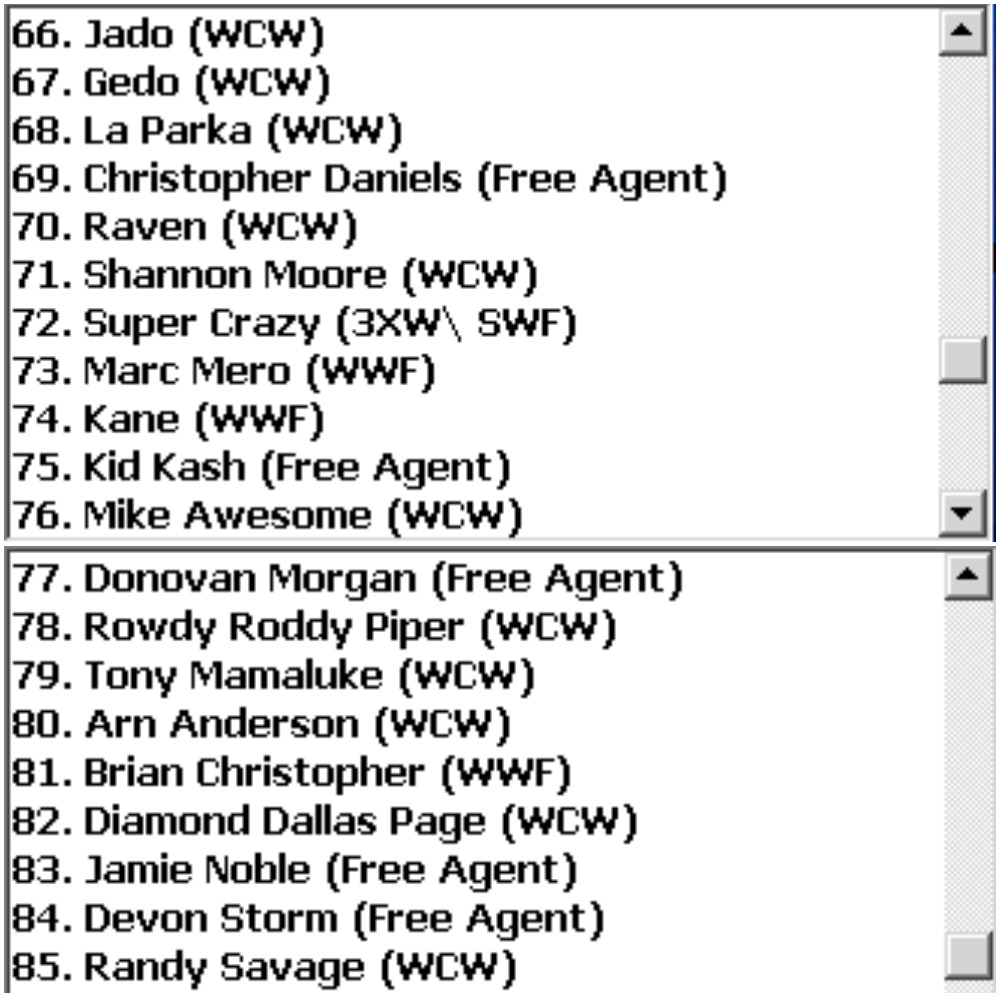 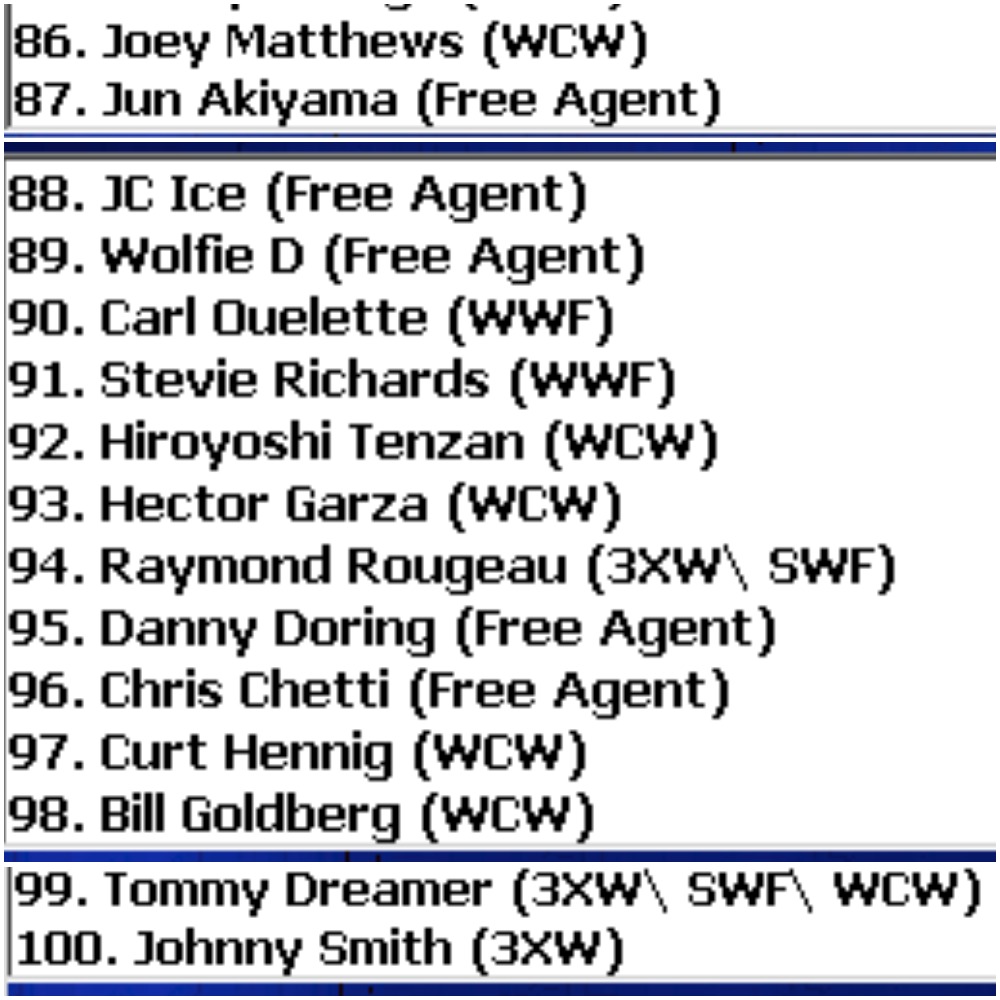 About time I got started with my next post!!

We're officially into 1999, and while the faces at the top of the card are still relatively the same, a plethora of new names have emerged on the WCW roster since Starrcade 1998. Lance Storm made his WCW debut at the very end of 1998, and reunited with his longtime tag team partner Chris Jericho to reform the Thrillseekers (though this is a case where they're just using the same name, and are still very much heels, as opposed to reverting to what they were in SMW). Jericho started a rivalry with Chris Benoit over the WCW World TV Title right at the end of 1998, and in a big tag team match on the January 4th Nitro in the Georgia Dome, The Thrillseekers defeated the Horsemen team of Chris Benoit and Dean Malenko when Don Callis interfered on behalf of Jericho & Storm. From that point forward, Callis would become the manager of The Thrillseekers.

That was far from the only debut. Following his loss to Sting at Starrcade 1998, Bret Hart introduced Andrew Martin (who was graduating from OMEGA) as his new bodyguard, and the two soon found quick success, as they captured the NWA World Tag Team Titles from Harlem Heat during the aforementioned January 4th Nitro in the Georgia Dome. The following week, Bret Hart & Andrew Martin would join forces with Chris Jericho, Lance Storm, & Don Callis to officially form WCW's version of Team Canada. Of course, this version has much different look that the version that was seen in WWF two years prior. This time, it was Bret Hart at the helm, but with a number of risings stars surrounding him.

The debuts continued at the start of 1999, as two new tag teams burst onto the scene from OMEGA. Of course, those two teams were The Hardy Boyz and Edge & Christian. Both teams had showcase matches in the few weeks of 1999, before a match was eventually made for the PPV that would see both teams face off against each other.

The final new names I need to make note of are Bam Bam Bigelow and Chris Kanyon. I decided to bring back Kanyon as himself (he had previously been Mortis when the game started) and sign Bam Bam so that I could put together The Jersey Triad, several months before they actually became a faction in OTL. Bam Bam isn't featured on this show, but Kanyon is, as he's teaming with DDP.

In terms of everything else that was going on in WCW, there wasn't much else to report on. Kevin Nash was gearing up for his WCW World Title shot against Bill Goldberg at Souled Out 1999, while Hollywood Hogan and Scott Hall (and their respective factions) continued to go after each other, leading to a big multi-man tag on the PPV. Sting's feud ending win over Bret Hart at Starrcade 1998 led him to a title shot against Ric Flair, but Eddie Guerrero was able to sneak his was back in the picture, as the former champion looking for revenge.

With regards to title changes, the only title that changed hands between PPVs (besides the NWA World Tag Team Titles) was the WCW Hardcore Title, which saw a couple of title changes. Andrew Martin was a double champion for a brief period, as he won the title from Perry Saturn on the January 7th edition of Thunder. Unfortunately for Martin, he lost the title right back to Saturn two days later on Saturday Night.

Anyway, here's how things turned out with Souled Out 1999 from Charleston, West Virginia:

For Souled Out 1999 (which took place on January 17th, 1999, just like in OTL), I got an overall score of 85%, which is my highest PPV score to date, beating out the 84% set by both Starrcade 1998 and Blood, Sweat, & Tears. The match that stood head and shoulders above the rest was Chris Jericho vs. Chris Benoit for the WCW World TV Title, which got a whopping 98%, and a ***** rating. Two other matches that also easily broke the 90% barrier were The Hardy Boyz vs. Edge & Christian, and the Triple Threat Match for the NWA World Heavyweight Title, which both got a score of 93%. Four matches ended up scoring in the 80% range. Lance Storm vs Jerry Lynn got 88%, the Fatal Four-Way Match from the WCW Cruiserweight Title got 86%, Mike Awesome vs. Randy Savage in a Last Man Standing Match for the WCW United States Title got 84%, and the Four-Way Tag Team Elimination Match for the NWA World Tag Team Titles got 83%. So that's seven matches at 83% or higher. The main event and the ten-man tag were in the upper 70% range (77% and 76% respectively), but easily at the bottom, in terms of overall performance (though they weren't terrible scores).

Obviously, I was very happy with things turned out with the scores. As for the results, Bill Goldberg beating Kevin Nash happens pretty cleanly, though I would envision the show going off the air with those two getting into a four-way brawl with Hollywood Hogan and Scott Hall (setting up the main event of SuperBrawl IX). I decided to keep the Eddie Guerrero/Ric Flair feud going a little bit longer, so I put the title back on Guerrero to lead to a final climactic match (again, at the next PPV). The decision to put the NWA World Tag Team Titles on DDP & Kanyon was just something I wanted to do, as I never had plans for Bret Hart & Andrew Martin to be long-term champions.

Chris Jericho vs. Chris Benoit is the start of a big feud that would occupy much of 1999, which the Last Man Standing Match was effectively the end of the Mike Awesome/Randy Savage rivalry. The Ten-Man Tag was just away to keep things going between Hollywood Hogan and Scott Hall, and also to set up a title challenge for current WCW World Tag Team Champions RVD & Sabu (more on that in the next post). The Four-Way for the Cruiserweight Title was just a cool match that I wanted to throw together, and putting Jerry Lynn up against Lance Storm was just a move to have a good match (and to put Storm over).

While The Hardy Boyz get the win over Edge & Christian, the story continued in the aftermath. Upset over the lost, Edge & Christian attacked The Hardy Boyz immediately afterwards, and on the following night's Nitro, they officially joined the ranks of Team Canada, making the faction incredibly strong right out of the gate.

That's it for this post!! Tune in next time as I go over WCW's return to Northern California for SuperBrawl IX!!