They haven't teamed up this year much at all so I think they'll be alright, I hope they feud or something, would be cool.
Top

Yeah they only teamed like 20 times this year and Tanaka isn't a NOAH guy but he's still a babyface character so we'll see. They teamed as recently as the Global League finals though, against a Suzuki-gun team.

Regarding Suzuki-gun you see conflicting stuff on whether or not they're going back to New Japan anytime soon and this Sugiura turn would suggest they might not be, so to people who know what they're talking about, is there any clarification on that?
twitter
Top

Whatever happened to the Morishima retirement thing? Did it ever happen?
Where I try to review wrestling.
Top

PKThree wrote:Whatever happened to the Morishima retirement thing? Did it ever happen?

He wanted one final match but couldn't get into the right shape for it.
Top 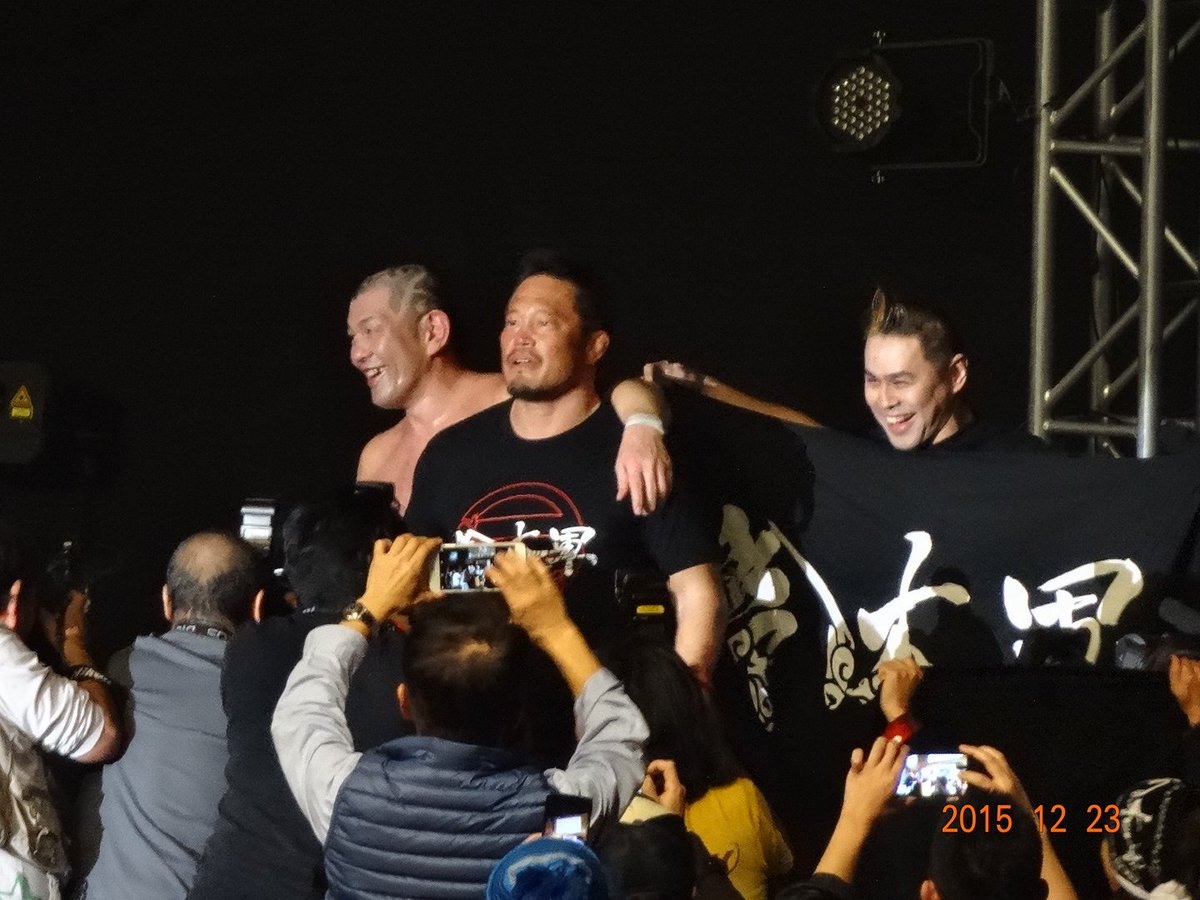 Would've been nice if he sold out BEFORE his stable's leader lost the most important title in the company.
Top

You took my title. I'll take your Suguira!
Where I try to review wrestling.
Top

Some very interesting things happening in this company as we turn the calendar.

-Looks like Nakajima is now officially a roster member. He's also getting an immediate title shot on 1/31 w/Yone vs KES.

-Yoshinobu Kanemaru is back, and that's great news. He's teaming with Go on the next tour, including a tag match vs Shelton & Despy in Korakuen on 1/9. The Korakuen lineup looks great, with a bunch of set up stuff for 1/31 http://www.noah.co.jp/tour_detail.php?tour_id=1530

-I would expect Kotaro Suzuki to join Go & Kanemaru eventually, as the Burning guys slowly return from AJPW. I like the uneasiness gimmick the NOAH roster is doing with the Burning guys, because that is how actual real humans would react to all of this.

-1/31 has Marufuji/Sugiura, KES/Nakajima & Yone, Ishimori/Kenoh, Harada & Kotoge/TAKA & Taichi (back together!) as the title matches, plus Go vs Minoru Suzuki. Looks like a great show.

I love a lot of these directions. Can't wait to watch Destiny.
Top

The match I’m most looking forward to is Ohara vs Kenoh. I thought they were a fun tag team in 2015 but I hope they can establish themselves as one of the best junior teams in Japan next year. Please let Ohara win, he deserves it after losing his teeth CIMA style.
HEAT UP SUPERFAN! BEST OF HEAT UP
Top

YEAH. Lol. I have to say, I'm really not a fan of the Sugiura turn at all. Like my man said on the last page one of the biggest flaws in the past year was having a bunch of midcarders destroy the entire roster and make them look so bad. Sugiura's the one guy who has A. Not really lost any luster or was made to look bad during 2015. And B. Was actually kind of sort of a draw when he was World Champion at one point in his life. Weakening the NOAH roster at large is bad. Aligning your one undamaged star with the representatives of a storyline that drove away a large portion of the fanbase and associating him with that is even worse.


Joe Lanza wrote:Some very interesting things happening in this company as we turn the calendar.

-Looks like Nakajima is now officially a roster member. He's also getting an immediate title shot on 1/31 w/Yone vs KES.

This to me was the biggest news of the show and definitely the best. It's a little late and a longtime coming but it really feels like the time is now (well it's felt like that quite a few times in his career) for his big push now that there's nothing holding him back. He's someone to watch and I will be very happy if his stock gets raised.


Yoshinobu Kanemaru is back, and that's great news. He's teaming with Go on the next tour, including a tag match vs Shelton & Despy in Korakuen on 1/9. The Korakuen lineup looks great, with a bunch of set up stuff for 1/31 http://www.noah.co.jp/tour_detail.php?tour_id=1530

I mean, and I mean this in the most respectful way as I was once a noted Kanemaru defender on certain online message boards around 7 years ago, but on his own he shouldn't be getting a push in that division and he's not a real difference maker at all in terms of match quality among that bunch. If it were up to me he's a strictly tag player with Go or possibly a veteran Jr. team with Ogawa OR a team with Kotaro depending on which division you want to freshen up. He's flat out solid. Kotaro could add more but I still wouldn't want to push him over any of their champions or Kenoh/Ohara. (Also was once a big Kotaro mark and +1 at liking the handling of the Burning guys and Marufuji's resistance to them, that is another potentially great thing to look out for in 2016. It's no surprise different people book the terrible SZKG stuff and the rest that is good.


The match I’m most looking forward to is Ohara vs Kenoh. I thought they were a fun tag team in 2015 but I hope they can establish themselves as one of the best junior teams in Japan next year. Please let Ohara win, he deserves it after losing his teeth CIMA style.

I'm in 100% agreement here. That's the one I want to see most as well. Really love those two and Ohara proved his tough guy status on top of it. Hope he's next in line to get the title down the road after a cool Ishimori runs through some of these other cool guys.

When I first read about all this I thought it was a horrible mistake to continue SZKG in NOAH after potentially bringing back some alienated fans who you're risking driving away again and absolutely none of those fans wanted to see the company's big moment ruined by a heel turn of one of their most beloved wrestlers if they were watching. In the end I wish that wouldn't have happened or at least hold off on Sugiura joining until the next show and let NOAH get a big win for once. In general though at first I thought a clean break/fresh start would be best for the fans and the show quality, but like I said and was said, they made the roster look really bad. There needs to be some putting over of some people by Suzuki (the Juniors already are and that's good) to at least let the roster save some face and we can get them fully integrated into the roster or they do eventually leave though that's unlikely unless a few injuries in NJPW occur.
Follow me on Twitter - @DylanZeroSky

All in favor of the old guards returning (Kotaro and Kanemaru). Lord knows NOAH needs all the star power from every single talent from the heyday and this further adds depth to their already quite talented Jrs Division. I always wondered "Damn if only the Burning guys didnt leave for AJPW and would complement new Jrs of ZSJ, Ohara, Kenoh and Momo No Seishun. " It was starting to get quite repetitive with Ohara/Kenoh vs Harada/Kotoge having to carry the division as the big match to fall back upon within whenever they need a marquee Jrs match.

Although this also presents a problem that has plagued NOAH throughout and that is bringing back old stars, and building newer and younger talent at a snail's pace.
Top

Fully expect Ishimori to a be transitional champion for Kenoh.

Really liked Marufuji/Suzuki from Destiny. Easily their best match together this year. Feeling somewhere in the ***3/4 to **** range. The Sugiura turn got the perfect reaction.
Last edited by Quentin Moody on Tue Dec 29, 2015 9:11 pm, edited 1 time in total.
Top

Getting caught up in the greatness of Marufuji/Suzuki, I forgot to mention how fucking awesome Ohara/Kenoh was. Flat out sprint. Crisp, intense, with a crowd that was super in to it. Don't skip it.
Top
Post Reply
1152 posts