Just received the sad news that Kris Travis, who won championships all over the UK, and was one half of the Project Ego tag team with Martin Kirby, has died from stomach cancer at just 32 years of age. Trav was one of the best in the country, and was voted Best UK Wrestler by Fighting Spirit Magazine, but he was also a super fun man, who wasn't afraid to be completely silly when called for. I even did the Conga Line with him during a PROGRESS show.

Trav fought valiantly against stomach cancer from late 2014, and even made a brief comeback in mid-2015, when I saw his comeback match at Preston City Wrestling against Sha Samuels, and the final match of his career in PROGRESS against Marty Scurll. Kris was always a joy to be around when he was selling merch, and I enjoyed having banter with him at shows and on Twitter. It's like a special soul of British Wrestling has been ripped from us, but Kris Travis will never be forgotten.

Rest in Peace, and Thank you Trav!
Top

Horrible news, and unfortunately news that many of us had worried was coming for a while.

He was a tremendous talent and really someone who could have being right at the forefront of this latest UK indie boom. He will be sorely missed both as a wrestler but more importantly as a wonderful person.

Just awful. I feel for his family as well as Kirby, Ligero and the rest who came up with him.
Top

This is a really hard one. Sometimes this is just nice thing to say but he genuinely fought tremendously hard in his cancer battle.

Feel very sorry for Shirleigh here. She was just a well known WWE fan girl from the UK but made headlines as sadly her mother and sister died in a house fire a few years ago. WWE and Wrestlers really supported her through all that. Anyway she arrived in Dallas only to find out about her friend Kris passing:

Rest in peace. Unfortunately, I haven't seen much of him, most of it was during 2011-13, but he was clearly a solid wrestler. Terrible when they die so young.
Top

Chismo wrote:Rest in peace. Unfortunately, I haven't seen much of him, most of it was during 2011-13, but he was clearly a solid wrestler. Terrible when they die so young.

He was really starting to come into his own, that brief period where he was making his comeback everything all felt so optimistic both for him personally but also for him professionally.
Top

It's truly striking how many genuinely sweet messages there are about him on Twitter today. A real testament to the person he was.
Top

Such a sad day for British Wrestling.

And I echo everyone else's sentiment's, I've seen so many heartfelt messages of sympathy and support today on social media, all delivered with far more eloquence than I can offer and all (as blueisthecolour says) a true testament to not only how good he was as a wrestler but how great he was as a person.

Trav was already an established name on the card when I first started going to shows, and he was one of the first guys to really jump out at me on our scene, even on the odd occasion he wasn't in the best match of the night we'd still end up, invariably, talking about (or more accurately laughing about) something he did that made his match memorable, I think this is why you'll probably hear a number of fans, wrestlers and promoters saying he was the best the UK had to offer!

Again, such a sad day. And my thoughts go out to all his family and friends.
Top

The famous conga line from PROGRESS - I'm the big lad two behind Trav, with Jim Smallman right behind me.
Top

Very sad news, living around the Leeds area for a long time I have seen a lot of Trav and Ligero over the time they were getting going on the UK scene, really enjoyed his two matches over at PCW with Devitt, just before Devitt departed for WWE. Always great fun, a versatile performer and one of the nicest guys when talked to outside the ring after the shows. 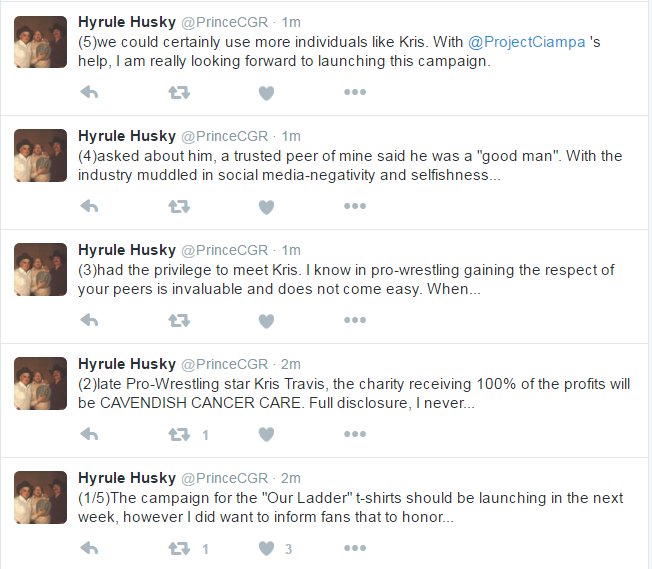