by TGD287
Quick recommendations on DVDs to pick up?

TGD287 wrote:Quick recommendations on DVDs to pick up?

For ROH, the shows they did with New Japan (the four shows in May and the two in August), if you don't have them already, are all easy recommendations. I also really enjoyed the Dayton show in January (which had an amazing Alberto El Patron vs. Roderick Strong match), and the Atlanta show from February (which is legitimately one of the best North American wrestling shows of the entire year). I also think any of the shows with Samoa Joe on them are worth a look as well.

by Mike
Yeah, that Dayton January show is very good and I thought Roddy/Alberto was easily Alberto's best post-WWE run (before he came back of course).

The Atlanta show from February is a must and the two Philly shows from May are great, great, great shows. The Toronto shows are real good. I have heard the September Chicago show is excellent too.

WWE Shop has 20% off title belts, 30% off shirts, and 40% off DVDs/Blu-Ray. One of those deals will be eliminated tomorrow and another on Sunday. Be sure to use the VOW link!

by Mike
RudoReels.com is doing a BF sale on discounted blu rays. Lots of New Japan, as well as comps of classic matches.

by syxxpakk
Caught up on ROH with the sale. Prob not going to go for much more with the Black Friday-stuff.

by Mike
Inter Species Wrestling is doing a big catch up sale for all of their 2015 shows, plus a t-shirt and action figures. http://interspecieswrestling.com/produc ... 2015-sale/

Highspots.com has their Black Friday sale with 25% off most items on their website and a DVD sale. 2015 BOLA is NOT included.

by izzac99
I got 8 dvds from ROH
A pair of trunks,Liger autograph and 5 dvds from Highspots
5 PWG dvds on that 5 for $40 deal
Money well spent 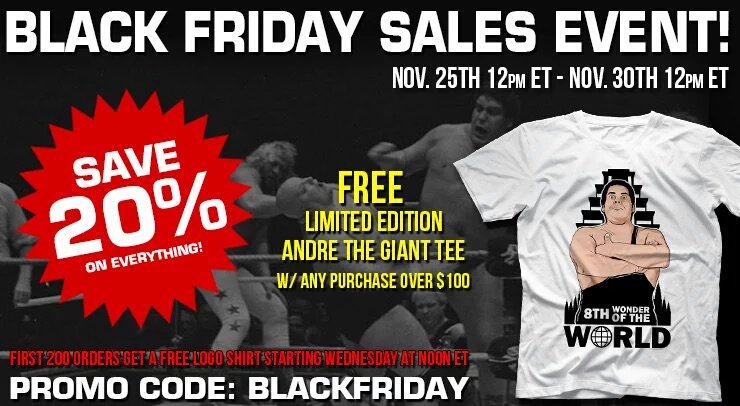 AIW has all DVDs $10 minus the new releases and blu rays at http://shop.aiwrestling.com/


Here's a quick rundown of all the Black Friday Sales at http://www.DGUSA.tv on merchandise and http://www.WWNLive.com on iPPVs. These sales will run from November 25th-29th at midnight EST.

-All EVOLVE, WWN Supershow, SHINE and ACW Blu-rays are 50% off and just $10 each!
-All EVOLVE, SHINE, DGUSA and Misc. DVDs are only $7.50 each. That's the lowest price we've ever offered these titles!
-Most PWG DVDs are 33% off and $10 each!
-All EVOLVE, DGUSA, SHINE, FIP, ACW and WWN Supershow iPPVs at WWNLive.com On Demand are 33% off and $9.99 each! You will get unlimited viewing when you buy them!
-Everything is the DGUSA.tv Gear section is 50% off including EVOLVE and DGUSA shirts and hats!
-All prices are already marked down. No codes or refunds are needed.
-Order online by clicking any of those links or by calling 267-638-6583.

Email [email protected] if you have any questions.

by supersonic
For non-wrestling, I'd take advantage of the 50% off sale Express has this week to pick up some quality clothing.

by themib
Revolution Pro Wrestling in the UK is offering 20% off all their shows to stream or digitally download on RPWOnDemand.com, using the promo code "BLACKFRIDAY", including all the shows featuring New Japan stars.

*SHIMMER are offering free shipping to the USA and Canada ($10 to other countries) if you buy four or more DVDs from them from now until Sunday at shimmerwrestling.com.

*Insane Championship Wrestling are doing 25% off all merch tomorrow only (Black Friday itself) at http://insanechampionshipwrestling.bigcartel.com when you use the promo code "BLACKLABELFRIDAY".

by themib
PROGRESS Wrestling have 20% off all the merch in their shop until midnight tonight UK time when you use the code "blackprogressfriday".

by Mike
Smart Mark is doing a sale starting now and ending Monday @ 6pm. All DVD/MP4 orders $50 or more save 30% off.
All times are UTC
Page 2 of 3
Powered by phpBB® Forum Software © phpBB Limited
https://www.phpbb.com/