Morten VH wrote:You can't really use a photo for anything, if there's no one in the ring. We don't know how long before the show that photo was taken or if it was during an intermission.

I hate Bob Ryder. He's the most annoyingly stupid man in the business these days.

True, though that was the only photo I could find (if there was a more accurate photo I would have posted it).

Bob Ryder just seems like such a strange person.

Bob Ryder still thinks he works for WCW. Which explains everything
Where I try to review wrestling.
Top

I wouldn't piss on Bob Ryder if he was on fire.
Top

Bob Ryder is fat and I would not have sex with him
Where I try to review wrestling.
Top

The India tour seems to be on: 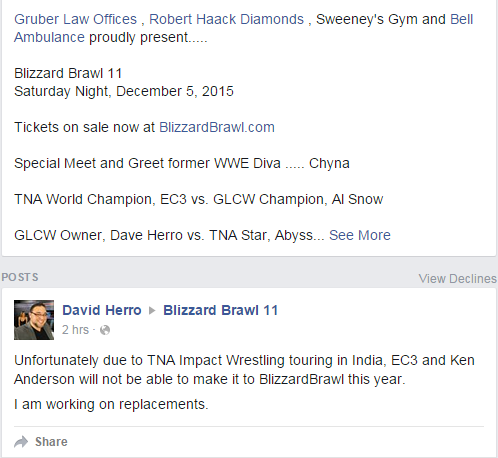 Oh my, that TNA tour of India is going be amazing for all the wrong reasons.

If it actually happens.
Top

I take it that the bizarro stuff they taped for those four days that everyone got confused by will be the eight weeks of TV after the PPV. Not like they have anything else...
Top

themib wrote:I take it that the bizarro stuff they taped for those four days that everyone got confused by will be the eight weeks of TV after the PPV. Not like they have anything else...

TNA usually announces TV tapings weeks and weeks in advance and they haven't for next month, so your theory is a good bet to happen. That bizarro stuff was supposed to be for some stand alone "One Night Only" PPVs, but one of their upcoming house shows is being changed into a One Night Only PPV taping, so it seems like they're going to cannibalize their previous PPV tapings and turn them into Impact episodes. It will likely be pretty weird as they are full of guys who aren't currently part of the regular roster.
Works The Hands. My US indy wrestling show review blog! Overlong reviews of months old shows? You got it!
Top

Not to rehash old waters, but why didn't their planned tour of China work out? Judging by the reception/turnout Evolve got, it seemed an actually smart move for a quick cash injection (if nothing else).
Top

Tommaso Ciampa pulled off his own little Rick Rude moment by appearing on both Impact and NXT last night... albeit losing both matches.

Matt Hardy got added to Sunday's main event in a weird deal where Drew Galloway had to win his tag match to get Matt in. Got a feeling Jeff (still your top draw by the way) turns on his brother.

Oh that BFG main event is going to be terrible.

Rottenrocker wrote:Oh that BFG main event is going to be terrible.

I wouldn't say terrible but it is definitively subtraction by addition.
Top

Hear that sound? That's the sound of a massive Matt Hardy sized hole being blasted in the side of the good ship TNA.

This company never ceases to amaze me with it's stupidity.
Top

I love TNA. I hope they never die. I cherish every lolTNA moment.

It does make sense to put it on Matt, in terms of them having to find a new network. He's the biggest name they have (which is also laughable), and they need the name value when shopping for a new network.

My best guess is we're gonna get a Jeff vs. Matt feud. It's the best thing TNA can do from a money perspective. But i'm just laughing at how they even got to this point.
Stablewars Fantasy Wrestling Games
Top

Not sure how much money that's going to bring when The Hardy Boys were both on top, in the Carolinas, and BFG (supposedly) drew 280 paying fans.
Top
Post Reply
667 posts