Just finished watching Impact. Well, it was more background stuff while I stared at my iPad, took the dog for a walk and read stuff on here. Better than most of Raw tho!

Dirty Heels vs The Wolves iron man was a pretty good match. This series produced nothing blow away, but a whole bunch of solid work from all guys involved.
Top

I really feel they missed an opportunity to put EC3 over strong as the guy here. Should have been a Lethalesque win.
Top

Hope he participates with The Death of TNA book:

"We wish TNA executive Andy Barton all the best as he pursues a new opportunity. Glad to have CSO Eric Sherman on board as we look to build on our powerful global brand, continue our rapid international growth and expand onto emerging platforms."

Barton worked with Dixie Carter at her Trifecta Entertainment management and marketing company from 1996 to 2002.

Barton then worked at TNA since 2002 to now, working his way up to Executive Vice President at the time he left the company. He spent almost twenty years working for Carter.

Imagine if he was a Meltzer source too.
Top 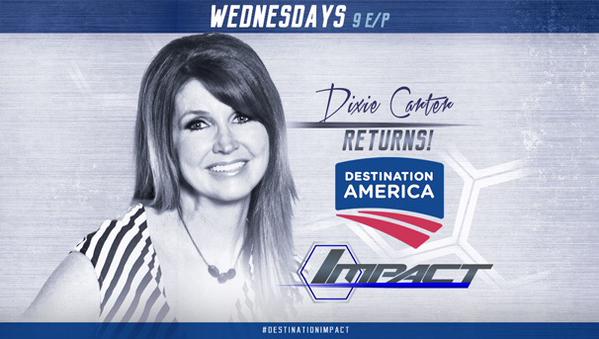 Apparently she's coming back as a face too. Save us Dixie!
Top

I also really enjoyed the ironman tag belt match. I thought Aries/Roode playing beat the clock when they were up 1-0 was great. Really it was a great ten minutes with decent enough work for the first twenty, but I felt that final ten minutes was hot stuff. Won't be a top 50, but maybe top 100 match for 2015 for me. That crowd is just so void of any heat and it's too dark.

It's weird, I think ROH TV is lit fine but TNA's lighting is what bothers me.
Top

For me it's that ROH TV is a show that isn't lit up brightly, it's an environment with shadows, but you can still see everything (apart from when they have a bad road rage and all you can see is the light glare). TNA is a bright environement akin to a WWE show (surprise surprise) but then there's dark patches to hide things (usually empty seats) and it looks odd
Top

maybe they can do angles on the internet like Chikara did.
Top

LIVE ON PERISCOPE: TNA VERSUS GFW IN A FULL METAL LOCKDOWN IN DIXIE'S BACKYARD
Top

I can't believe they wasted the Angle/EC3 rematch with a 30 minute build... Like seriously what are they thinking?

And then they have Angle win by DQ on top of that... When Angle is gonna be gone with an injury, why don't you do an injury angle and make EC3 looks strong. Instead they just make EC3 look like a classic chicken heel. I can't decide which i like the least of Rollins or EC3's booking. But they're certainly both weak.

Also, did anyone feel like they had a horrible hangover, the second Dixie's music hit?
Stablewars Fantasy Wrestling Games
Top


An issue between TNA and Lucha Underground has led to a number of planned TNA TV segments being pulled from upcoming episodes of Impact Wrestling, storylines being dropped and one recent TNA signing being dropped from the company, PWInsider.com has learned

At the center of the controversy with Shawn Hernandez, who recently returned to TNA and became part of the Beatdown Clan after appearing on the first season of Lucha Underground on The El Rey Network.

TNA sources indicate that Hernandez was signed to a deal by the company after informing TNA that contractually, he was free and clear to do so. After Hernandez made a number of appearances at TNA TV tapings, Lucha Underground approached TNA and informed them that contractually, Hernandez was still their contracted talent, that he was not released from his obligations to their promotion an that he could not legally appear on TNA broadcasts.

As you might imagine, this put TNA into a legally actionable position and with Impact Wrestling already pre-filmed well in advance, to boot. I am told that TNA management attempted to work out an agreement with Lucha Underground that would allow the existing footage to be used, including offering to pay Underground for Hernandez' appearances, but Underground turned down all those attempts. Given that the producers of the series come from a film and TV background, I was not surprised to hear that.

Since TNA cannot use the footage, the decision was made to pull anything involving the BDC and all of their current storylines are completed and done. TNA will be replacing those matches and vignettes with existing material, including some matches from the TNA Slammiversary PPV from a few weeks ago. TNA also intends to film material at their TV Tapings later this month that they can drop into the segments that are no longer available to be used. The matches that were filmed are, for now, completely scrapped and TNA will have to re-edit all of their TV.

Hernandez, obviously, is gone from TNA and until Lucha Underground begins filming additional material, is now in a position where he's losing work as TNA wanted to use him and cannot.

As far as the rest of the BDC, MVP, Kenny King, etc. will effectively be off those TV episodes until TNA can get new material with those talents so a number of talents who worked those tapings are now off television for the next several weeks as well.

some of 7/15 (may have already aired, was done at the same time as last week's aired stuff)
Wolves beat MVP/Kenny King by DQ