Grammarian wrote:In general, I don't think Evolve gets discussed enough in some of the more well-known wrestling sites, podcasts, newsletters. It's getting left out of a lot of the discussions of the huge wrestling/mma weekend. Considering the relationship with WWE and the talent used on these shows, as well as Cody's debut, I'd think it would get a bit more coverage. Plus, the shows this year have gotten a lot of buzz. I should point out that I'm not including VoW in this criticism.

I don't think there was a single word in the Observer this week about EVOLVE which is shocking. I think only the Super J Cup has me more amped this weekend.
Top

Based on my TL you'd think Evolve and NJPW are the biggest promotions in the world. I need to get outside of the bubble a bit more.
Top

The Torch mentioned it, but only after getting prodded. No mention WHATSOEVER in F4W land.
Top

So any thoughts on how Cody Rhodes looked tonight? Did he live up to this WWE dropped the ball big time hype that he's been getting since leaving WWE?
Top

Cody looked fine, he didn´t set the world on fire but he has the potential to do good in the indies, we will see tomorrow vs Hero.

EVOLVE 66 was good, first 3 matches were disappointing (Ethan Page vs DUSTIN in particular) but things picked up after Nese vs Gulak, Thatcher vs Riddle was great, best performance of both this year.
Top

Did Cody look better than Albright a decade ago?
SUPER DUPER STAR RATINGS~!

Anyone have a clip of Cody's new finish?

A little disappointing, honestly, but everything was solid. Riddle/Thatcher made my match of the night for me at about ***3/4.
Top

Last nights show was so hot and miss. I really enjoyed Riddle/End on ZSJ/Cedric, but then the show just got progressively worse.

Rhodes/Hero was fine, nothing special. I wouldn't fault Cody too much for it not being great, as it didn't look too different to your usual Hero match.

The last two matches were so, so bad. After a very good match the night before, Thatcher absolutely sucked here. Gulak is generally ok at adapting to other people's style sort of well, but when he wrestles someone so similar he's very hard to watch. I never want to see these two guys wrestle each other ever again. Awful stuff.

The main event was also just as bad. Total mess of a match.
Top

Everyone already kind of knew it, but this weekend really hammered home the point Joe and Rich made on the podcast. Thatcher has been passed by everyone else on the roster and is simply not capable of adjusting his style. At times he seems to actively avoid getting a reaction from the crowd, which in wrestling is completely ludicrous. It is one thing if GSP lies on the mat for five rounds and retains his title, because MMA is about getting the win. The whole point of wrestling being predetermined is so that you can get a better reaction out of the crowd. That was literally the reason why worked matches became a thing.

I had a suspicion that Thatcher would retain because wXw already announced him defending the Evolve Championship on their next show in Hamburg. Of course that could have meant nothing, but there was also no reason to announce the match as a title match in the first place as the guy Thatcher is facing is not a big deal yet. 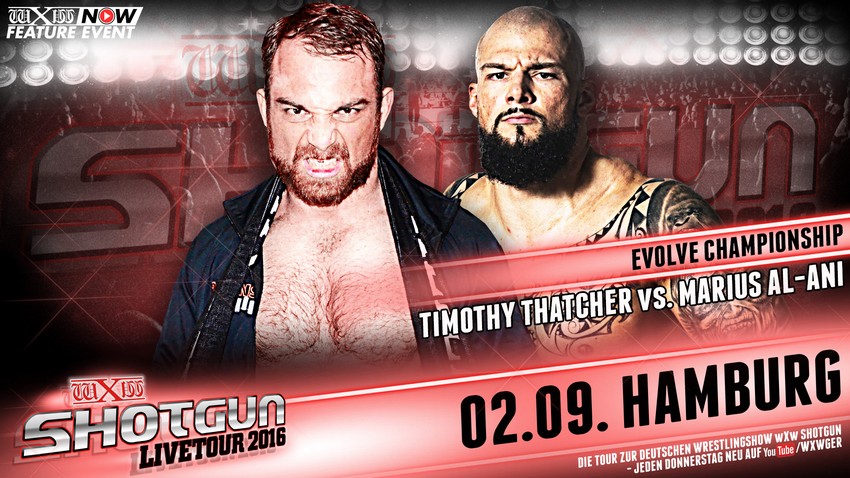 Evolve announced returns to Ybor City, Florda on October 16th, and Joppa, Maryland on November 13th. NXT GM William Regal will be attending a WWN Seminar/Tryout before the former.

Also, the full card has been announced for Evolve 68:

That card looks pretty good, all matches are interesting to me, glad to see more of Darby Allin and happy they are using Jigsaw again
Top

Plus more to be announced with Tracy Williams, Fred Yehi and others!!!


We are very excited to announce that Joey Styles will appear at EVOLVE 68 on September 10th in Deer, Park, NY and EVOLVE 69 on September 11th in Queens, NY. Styles will be available for pictures and autographs at both events. Styles will also appear on the live events. What will Joey's role be on the shows? He has expressed a desire to "give back" and share his knowledge. We'll find out what this means at the live events. Tickets are now on sale in the DGUSA.tv Store.

I would love to see a big WWE name show up unannounced at Evolve for a show. In the vein of big arena music acts playing unannounced small club shows.
Top

I hope David Starr does good against Ethan Page, would love to see him become a regular for EVOLVE.
Top
Post Reply
956 posts