WWE, TNA, and all U.S./Canada based graps talk
Locked
2702 posts

Leo C wrote:I really have no problem with some of these interferences. I didn't like the AJ one as I feel like simply switching the participant in the match is a bit too much and I don't think Cedric should be losing to Caprice of all people, but the Addiction matches' interference is leading to something down the line, whereas most WWE interference finishes are just there because they book the match and don't want either guy to lose.

Like when ROH booked Roddy/Cole in May and when they booked Elgin/Page and Lethal/Moose last month. Right.

Actually you're thinking of Jay Briscoe vs. Moose. Jay Lethal vs. Moose is happening this weekend in Chicago Ridge, however.

Also, two late additions to the undercard for tonight's show in Dearborn:

The TV and product in general has really stagnated since Lethal won the belt. Maybe that's just because he already cleaned the division out before winning it but there really hasn't been a compelling angle to keep me acrively rushing home to watch the TV like I was leading up to the last two shows.
It feels like they've been relying way too hard on the KRD angle to carry the show but they've already established that reDragon/Cole can beat them and they've just been stretching it out with dumb run ins that aren't remotley surprising or fun to watch. I'm pretty confident there should be a big shake up after ASE but even as a big fanboy for the company I've got to admit that now is a definite low
Top

Leo C wrote:I really have no problem with some of these interferences. I didn't like the AJ one as I feel like simply switching the participant in the match is a bit too much and I don't think Cedric should be losing to Caprice of all people, but the Addiction matches' interference is leading to something down the line, whereas most WWE interference finishes are just there because they book the match and don't want either guy to lose.

Like when ROH booked Roddy/Cole in May and when they booked Elgin/Page and Lethal/Moose last month. Right.

I haven't watched/read spoilers on any of these matches, so you're probably right. I was speaking based on those TV matches I saw. Although ROH doing them in some live events here and there is much different from WWE doing it every show.
Top

Just added to tomorrow night's show in Chicago Ridge is a rematch from Global Wars 2014:

That's a very fun match. Watanabe has really been winning me over lately. I wonder which of them will be back in New Japan first...
Top

I think the biggest criticisms of Delirious as a booker have to be his over reliance on screwy finishes to set up matches and the sheer lack of storylines in general. I think he's good at using his roster to put together matches I personally want to see and when he really gets his teeth into a storyline it's often very good, but far too often "big" matches just feel like two guys facing each other.

It's like they're kind of stuck awkwardly between the Puro sports presentation and the Western story presentation. We're kind of getting the worst of both worlds, there's a lack of real stories but we're still getting a tonne of screwy finishes.

Look at how much Lethal benefitted fom going over clean against Briscoe. And look how little Briscoe lost. Would Roddy really have lost a whole lot from taking a clean pin against Lethal after going the distance with him previously? But no, just like Adam Cole's reign, we have to have a screwy finish or lots of interference/cheating to end every title match.
Top

The BJ Whitmer/Corino feud has been one of the longest and over exposed examples of booking, and nobody gives a shit. The fact that Delirious is ok with spending the amount of time that he has on this should tell everyone something.
Top

Seems like reactions to the show were pretty positive.

I was in Dearborn, here is the report I typed up.

No one thought the Bucks were going to be in the main event slot...they were being chanted for after Sydal-ACH and when Scarlett announced the 'Defy or Deny' Match it created a buzz.

The Bucks delivered without a doubt and it was great to see them tear it up with O'Reilly & Fish. Plus, The Kingdom stuff at the end really builds to the PPV match next week...

a. Father Time over Owen Travers in the dark opener

1. Bobby Fish over Will Ferrera - Very simple, smart opener. A lot of mat and leg work. Fish won with the Fish Hook.

2. Moose over Samson Walker - Lots of offense for Walker. Moose did not look as good as I've seen him before. Samson was an opponent of very similar size and it made for the competitive match-up. Moose won with his spear.

3. Kyle O'Reilly over Silas Young - Good match here and the first one to really get the crowd into the night. O'Reilly locked on a early headlock, leading to "Headlock City" chants. He continued with headlocks to wear down Silas, with the transitions in offense going in and out of the headlock as the primary hold. Kyle used his variety of arm submissions before getting Silas to tap to an arm and leg capture crossarm breaker.

4. Roderick Strong over Adam Cole - Great bout here, with two guys who have a lot of history. Strong was in control early and Cole seemed to be trying to figure out to get the edge. He did eventually get it and did all he could to put Roddy away. There was a great spot where Cole hit a superkick to the face, then the back of the head for a very, very nearfall. Roddy nailed End of Heartache to seal the win. Both showed mutual respect afterwards.

Intermission - ROH reminded us they are back in Michigan, in Kalamazoo as part of "Glory By Honor" weekend on October 23.

5. Hakim Zane over Jacob Something - Local talents here and the got a fair amount of time. Zane won with a double stomp, where Something was leveraged over the 2nd rope.

Post-match, Adam Page hit the ring with a crutch that BJ Whitmer was using earlier (he did a lot of commentary with Kevin Kelly). Page smashed both guys and called out Jay Briscoe ahead of their scheduled bout in Texas next week - Anything Goes.

Briscoe answered the challenge, but Page exited the ring and took off with Whitmer. Jay said he wanted his opponent, who was not a bitch like Page, to come out and they would have their match.

6. Jay Briscoe over Watanabe - Decent match. Watanabe still needs polish and he ring gear is enough to not take him seriously as a threat. Lots of suplexes from Watanabe, but Briscoe put an end to it all with the Jay Driller. Adam Page was back out and nailed Jay from behind with the crutch, laying him out. Watanabe recovered and assisted to chase Page off.

In an odd segment, after Jay recovered, The Romantic Touch hit the ring with his full entrance. Jay looked befuddled. Touch offered Jay a box, which Jay slapped out of his hands and sent silk rose petals flying. Touch took off too, not wanting to deal with Jay's wrath. I guess it was a comedy segment but didn't really connect as one.

7. Matt Sydal over ACH to take a 1-0 lead in their Best of 5 series. Excellent match! Sydal looked as good as I've seen him look. This was fantastic start to this series, with the idea that ACH wants to prove himself and go to the next level by winning against his partner and a "name" like Sydal. Crisp, fluid action all the way and the crowd went from being split at about 50/50 to pro-ACH and Sydal getting boos without being outwardly heelish. ACH could not hit a big top rope move late, with many attempts and Sydal hit a picturesque SSP to get the win. Both guys shook hands post-match.

8. Defy or Deny for the ROH World TV Title: Jay Lethal over Dalton Castle, Mark Briscoe and Cedric Alexander
Castle pinned Cedric with a German Suplex for the first elimination.
Lethal pinned Mark after the Lethal Injection for the second, having kicked him off the top rope to the floor and then slamming Castle into the guardrail on the opposite side of the ring before the pinfall.
For the final stretch, the crowd was SUPER into Castle as he battled back. Great interplay between The Boys and Truth Martini as well. Truth was offering the Book of Truth as an assist to Lethal from the ring apron, but The Boys got up on the apron too and used their fans to shield the eyes of Truth, allowing Castle to retrieve the book. It wasn't used and as Paul Turner went to remove it from the ring, Lethal hit a low-blow and got the pinfall. By virtue, Dalton cannot challenge for the TV Title during the remainder of Lethal's reign.

9. Non-Sanctioned, Anything Goes Tag: The Young Bucks over reDRagon
The Bucks came out first and stated that since The Kingdom were a no-show, there would be no Superkick Party in Dearborn and they were sorry they could not deliver for the fans. As they were cutting this promo, Kyle O'Reilly & Bobby Fish entered the aisleway. They said that they were up to the challenge, but since ROH could not sanction this match, it would have to be anything goes! The Bucks showed their agreement with stereo dives to their opponents on the floor and the sprint was underway.

This was just an excellent sprint brawl, with the Bucks getting an 80/20 split on the offense and hit all of their signature spots. The discrepancy in offense was put over after the bout, because of the fact that O'Reilly & Fish had indeed pulled double-duty. Down the stretch, O'Reilly was taken out with a springboard tombstone, Nick spiking him in Matt's hold from in the ring to the floor. The Bucks hit Chasing the Dragon on Fish, but could not get the pinfall. This was quickly followed-up by the Meltzer Driver and that was all.

As both teams were showing respect post-match, The Kingdom of Michael Bennett, Matt Taven and Maria hit the ring, in street clothes, taking out all 4. They cut a promo saying they were the next ROH World Tag Champs, and no flight delays or anything else would stop them.

Adam Cole came to the ringside area during this and showed his visual disapproval. Bennett & Taven encouraged him to come and join the fray, but Cole dismissed them and left, signaling more of fracture in The Kingdom. Maria got the mic and started to sing, "Hey, Hey, Hey...Goodbye" which allowed the recovered Bucks to re-enter the ring and nail superkicks to close the show and send the fans home happy!

Super strong 2nd half of the night. Best match was probably a tie between Strong-Cole and ACH-Sydal. The Bucks and Dalton Castle were probably the two most over acts. No return date for Dearborn announced.
Top 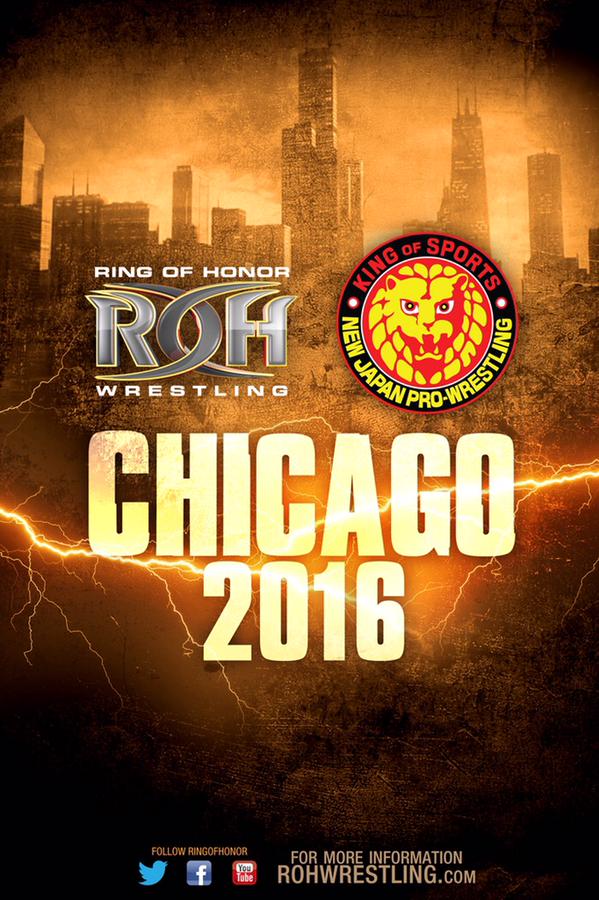