Talk about shows from the Voices of Wrestling podcast network and argue with us here.
Post Reply
51 posts

Light on topics for this week and it's Christmas so let's have some fun!

Send in your questions below whether wrestling, non-wrestling or Christmas-related.
Top

Top guys to look out for in 2017 that will have breakout years.
Top

What is your favorite Christmas song?

That's my Christmas-related question. The other one is: what are your predictions for the top 2-3 matches for Wrestle Kingdom 12?
Top

How could WWF have made Xanta Klaus a mega star? 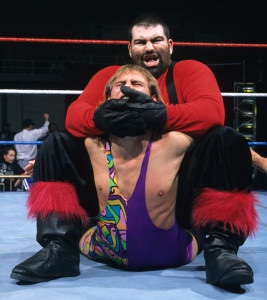 Do you think Samoa Joe will be on the main roster come Easter?
Top

Who leaves WWE first? Breeze, Ziggler, Fandango, Ascension or someone else?
Top

Has Joe found a good pizza place yet? Or anywhere decent to eat out (minus tinder)
Top

What's your most disappointing match? One you thought would really deliver but didn't.
Top

How come Young Lions and other (very) young talent in Japanese developmental (DNA for example) are considerably better than anything that comes out of the WWE Performance Center? All the young talent in the 10-men tag from the 12/1 Dragon Gate show is another example.
Top

How highly do you both rate Masakatsu Funaki and Taiyo Kea in terms of their importance to AJPW during their runs, and how important was Funaki in early 2013?
Last edited by Danwaka on Thu Dec 22, 2016 8:42 pm, edited 1 time in total.
Top

With the rumors of WWE doing a WWE: Japan show much like the WWE UK tourney do you see them working with any of the big non-NJPW promotions/indies to fill in talent there? (Probably could have worded this better)
Top

Any promotion, wrestler, feud, scene, subscription service, changes in the business (anything really) you two think has potential to blow up either positively or negatively in 2017?

Stuff like Timothy Thatcher bombing in 2016 compared to his 2015 or the European/Britwres scene seemingly peaking this year.
Top
Post Reply
51 posts