Who Finished 2022 as the Best In-Ring Wrestler per Cagematch Data? 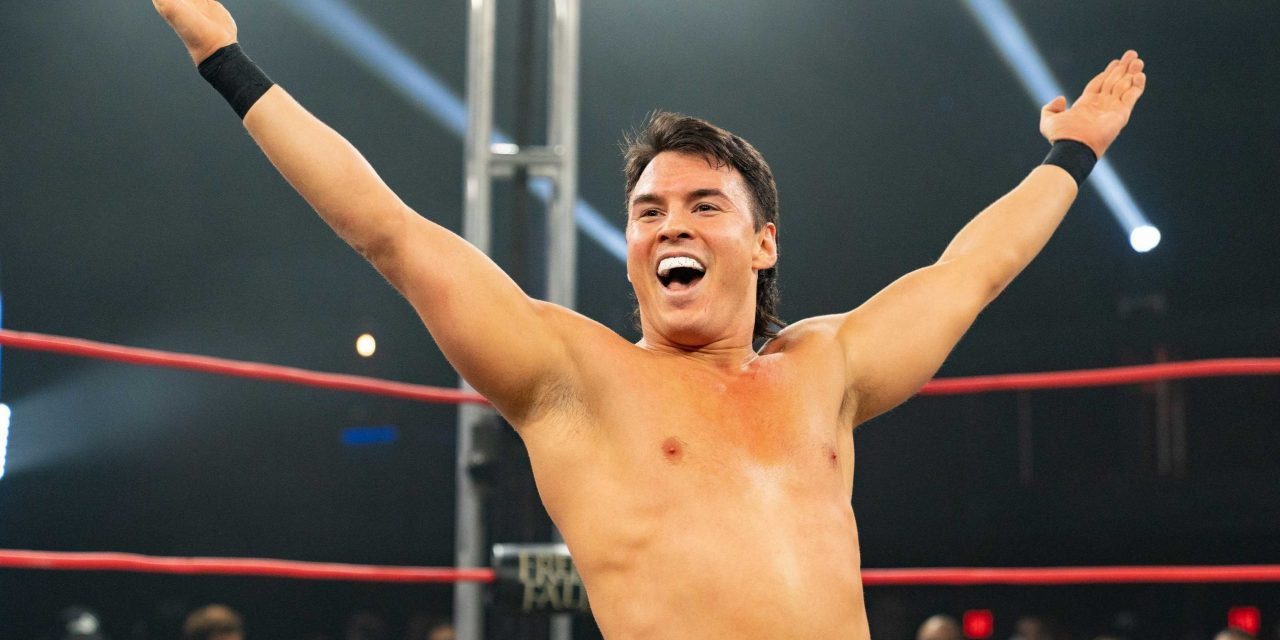 On January 3, I pulled all of Cagematch.net’s match ratings data from 2022. To be used in these calculations, matches had to have at least ten user ratings in Cagematch’s database.

I assigned point values to ranges of match ratings in an attempt to reward top-level matches. In my experience, a weighted average of 9.25+ is approximately in the range of a Dave Meltzer rating over five stars. 8.75 to 9.24 is roughly equivalent to 4 3/4 or 5 stars, and so forth to the range of 6.75-7.24, roughly three and a half stars. I tried to space out the points assigned to rating ranges to best reward the higher-rated matches while still providing recognition for matches on the lower end of ratings. Matches rated under 6.75 are not considered.

Matches involving more than three people on a team, matches with more than four sides competing, and battle royal-type matches are not included in these ratings. 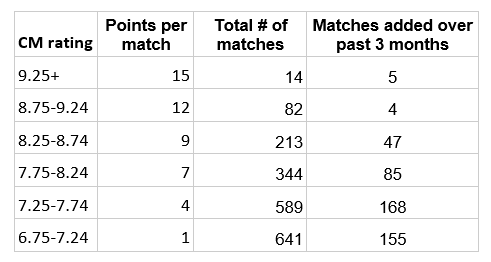 Please note that for the above chart, the matches added over the past three months didn’t necessarily all take in the stretch of July to September – matches from earlier in the year that crossed the ten-vote threshold, or otherwise had increases in their ratings to fall into a new category, would also be part of these counts. Matches that were counted before could have had their score shift enough to place them in a different group this time around as well.

There are, and will always be, some inherent limitations in using Cagematch data – the user base largely ignores lucha libre, with the exception of some extremely high-profile crossover matches. Dragongate also does not receive a significant number of votes for most matches, relative to how many shows they run. There are also some cliques of voters who heavily emphasize certain promotions. I don’t think any of those voting blocs have an outsized effect on these results. WWE voters are more likely to give shows particularly high ratings than they are individual matches.

We finish the year with 844 wrestlers who earned at least one point each, ranging from Aaron Henare to Zoey Stark. That’s an increase of 109 individuals represented compared with the last list. This list consists of 1883 matches that fit the criteria laid out above. That’s an additional 464 matches versus the last article.

Who has the most points?

The full spreadsheet of results is available at https://docs.google.com/spreadsheets/d/1pGFGjsfp3VznVl2EVUfJwYG2buMQy8WyKEqkFwFwmgU/edit?usp=sharing. The top 50 wrestlers are below: 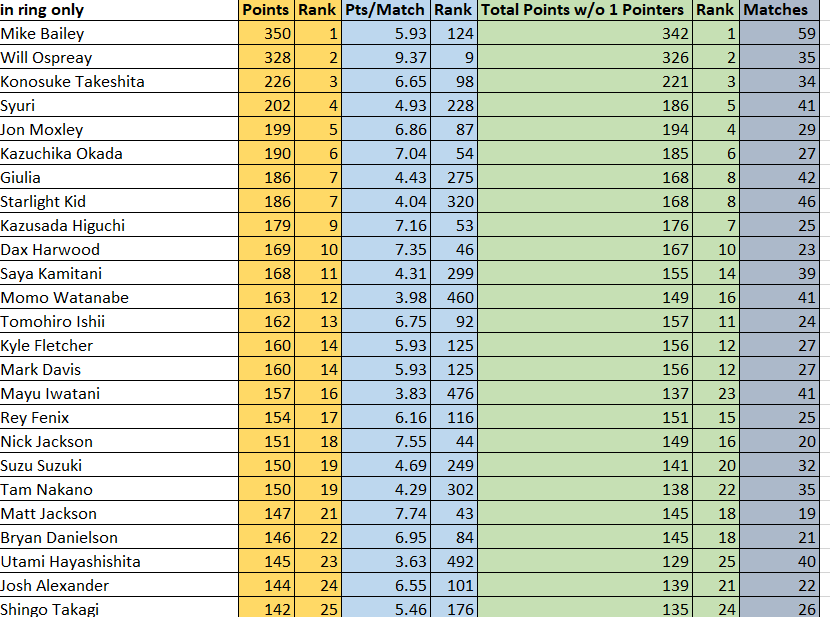 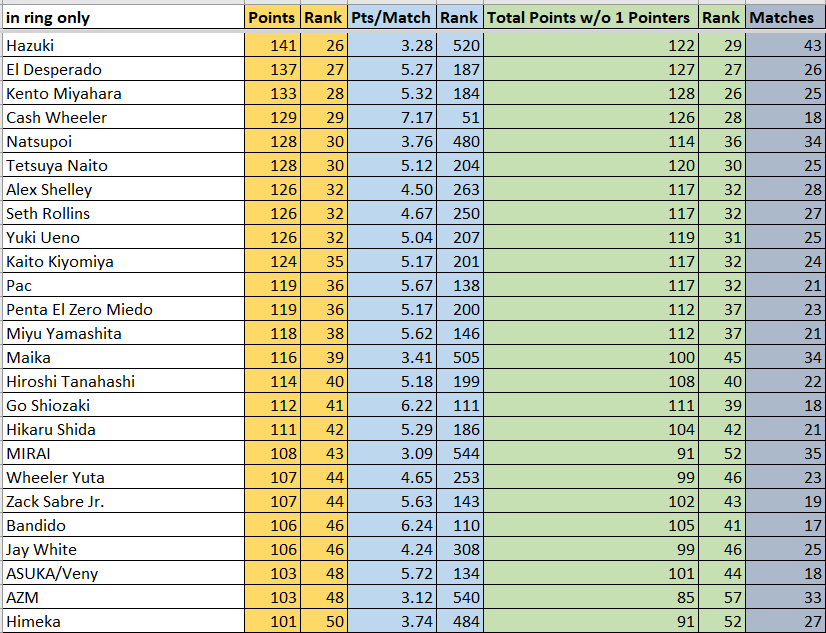 Who has the most points if we ignore the one-point specials?

This raises the question of what the standings would be like if we didn’t award any points for matches that average between 6.75 and 7.24 points. 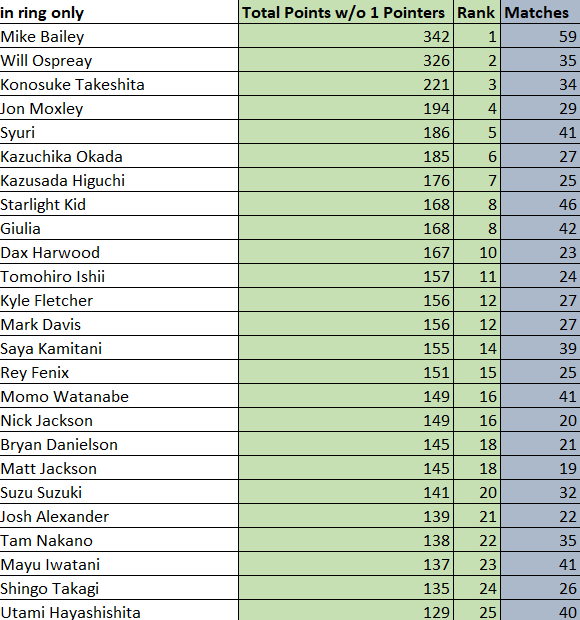 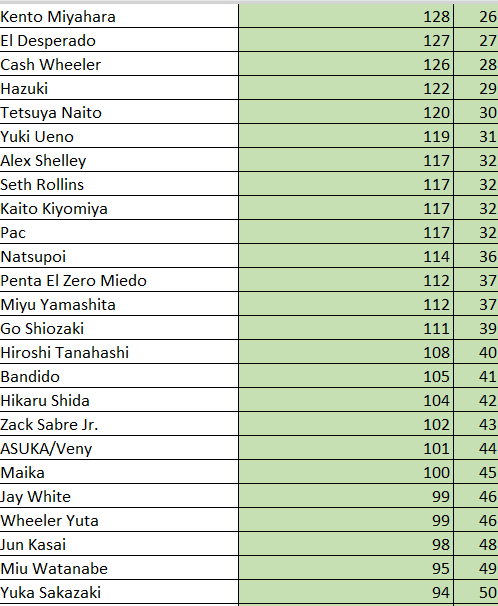 I am inclined to use these standings going forward; I think it’s generally fair to say STARDOM benefits from having a schedule that more people vote on matches at or over 7+/10 than from other major promotions.

Overall, I think these results are reasonable. A top five Most Outstanding in the WON awards of Bailey, Ospreay, Takeshita, Moxley, and Syuri is pretty reasonable. The idea of working with 640 fewer matches is appealing to me as well.

What about average points per match?

There’s one more method I’m going to explore in this article, which is the average number of points per match. I filtered the list to exclude anyone with fewer than ten qualifying matches, which gives us the following list: 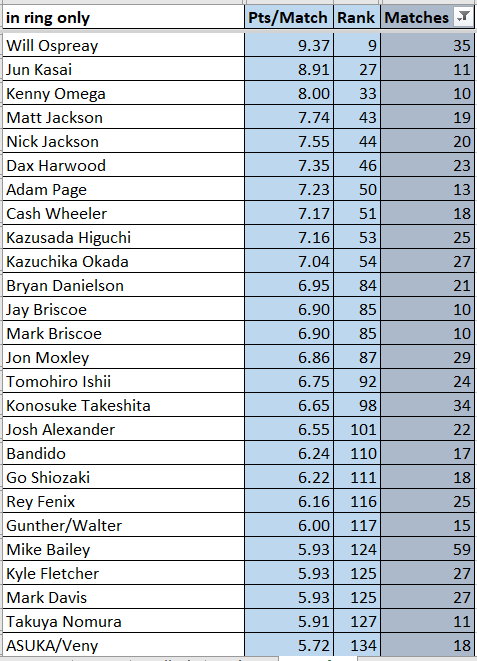 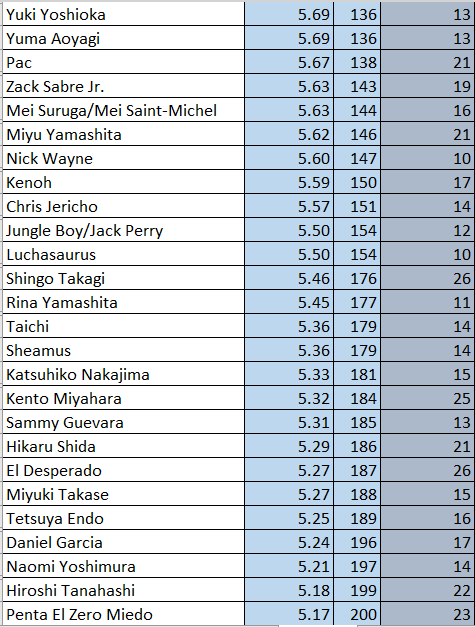 Which method should be used?

Frankly, a holistic approach where all aspects are considered would be the best, but I would put more weight on the total points than the average points.

I don’t like using the average number for a few reasons. I think you should get credit for being a workhorse. Just because of how the distribution of match ratings works, working more matches means you will have more matches in the bottom scoring ranges. It also effectively penalizes you for having a match rated in the 6.75-7.24 range – you get one point for such a match, but it will also drag your average down, while if you had a match with a 6.50 rating, your average is unaffected. Look at how STARDOM’s entire roster was removed from the top 50 when we used the averages. They arguably get too much credit for their lower-end matches, but even when we remove those from the sum, they work a lot of matches that get better reviews.

What should we take away from this?

Voting for an award like Most Outstanding is extremely subjective. I don’t think too many people will see these results and change their votes.

I think the truest value of a tool like this is to reveal names you may have overlooked over the year, and will hopefully lead to you finding a new wrestler or even promotion you will enjoy.

I think it helps to see just how much Mike Bailey worked, as he had at least one point-earning match in 12 different promotions, plus the Mark Hitchcock Memorial Super Show.

Oh, and also, Will Ospreay is very good at professional wrestling. 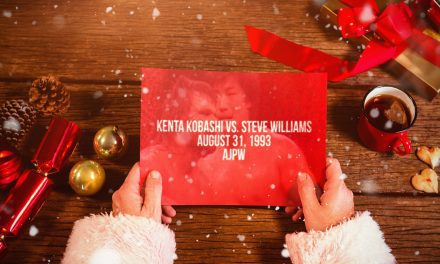