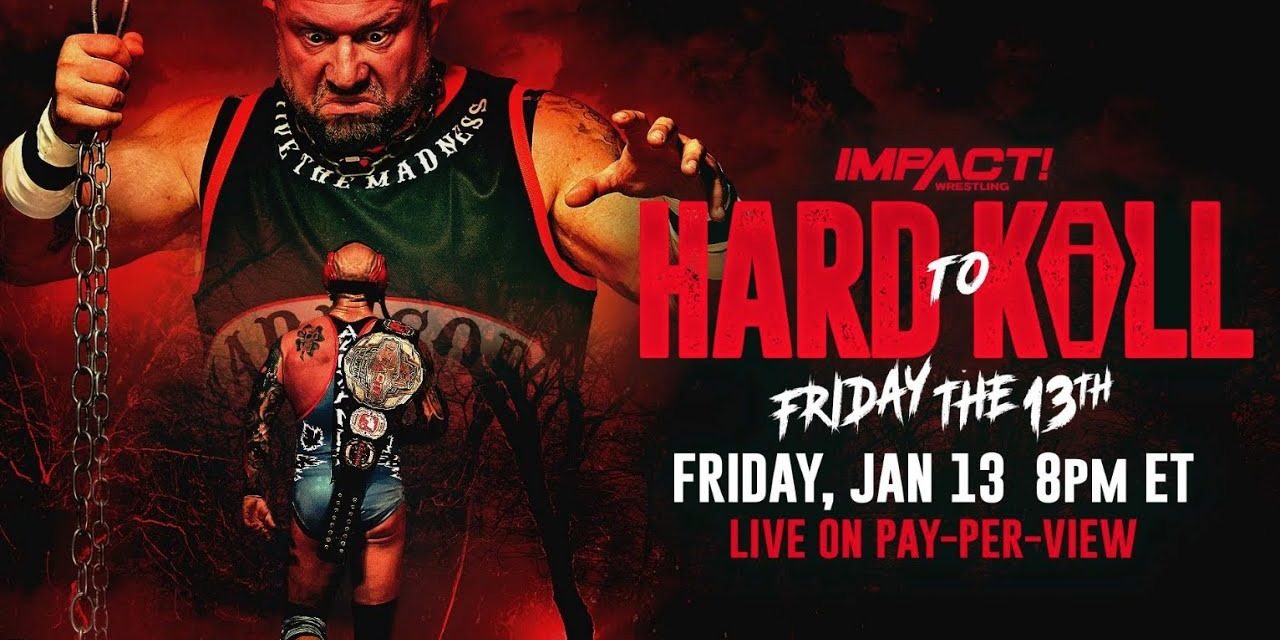 Impact Wrestling held their first pay-per-view of 2023, Hard to Kill, at Centre Stage in Atlanta on January 13. Mickie James put her career on the line in the main event as she challenged Jordynne Grace for the Impact Wrestling Knockouts World Championship.

If you’ve seen one scramble match like this, you’ve seen 100. Truth be told, I wasn’t expecting anything particularly special here, but what we did get didn’t click with me in the slightest.

Mike Jackson had a few cool spots to pop the live crowd, but I was far less impressed with him than other people seemed to be – when he was actually on his feet in the ring, he looked pretty uncoordinated and confused.

My main frustration was the angle just before the finish, with Kenny King coming through the crowd to push Mike Bailey off the top rope and cost him a potential win. Even though I loved Kenny’s promo later in the show which explained his involvement, I HATED the fact that the angle between the two was EXACTLY the same one they ran at Over Drive in November. Do better, bookers.

With Bailey out of the equation, Kushida cleared the apron with a handspring kick before submitting Angels with the Hoverboard Lock. **

It was hugely frustrating to see this match bumped down to the pre-show, it really was, although if you’re going to reuse a finish from your last live show for the second straight match, I suppose it makes sense.

These two have got great chemistry, so it was no surprise that the match they had here was a similar level to the one at Over Drive. Taurus’ Avalanche Gorilla Press Slam was a lovely spot, but unfortunately, the other more creative spots in the match didn’t come across as well as they should have because the camera work here was a bit off.

The finish does drag my rating down, but I’ll be able to get over the somewhat lazy booking if this is to set up a third, decisive match that sees Taurus finally win a title in Impact. ***1/4

Before the opening match, there was a 10-bell salute for the former Impact commentator Don West. It was a lovely moment and the emotion on the faces of the roster on the ramp showed how much Don will be missed.

Worked in exactly the way it should have been, this had a real early era TNA feel to it and ended up being far better than it probably had any right to be.

Every defense in Josh’s record-breaking reign has had a theme. Here, it was of him having to go to darker places as he found himself in the wheelhouse of the devious heel who’d got the mental advantage. Josh delivered on that story, showing a real, gnarly violent side as he survived Bully’s early onslaught and played him at his own game.

Although it made sense in the context of the story, having involvement from The Good Hands, Tommy Dreamer and Josh’s wife before Josh made Bully tap to the Ankle Lock was a bit much for me. ***

These guys went full pelt from before the opening bell and ultimately put together something that was a lot of fun.

The Bullet Club duo were well over with the Atlanta crowd, and their role in this match was significant, furthering the story of them getting closer and closer to beating the Motor City Machine Guns before eventually winning the titles.

On this occasion, Austin and Bey actually hit their finisher on the Guns, but they didn’t get to capitalize as the Major Players, who were the second team eliminated, interfered. The Guns cleared the ring and in the ensuing reset, hit the Dirt Bomb on Bey to retain. ***1/2

Post-match, Frankie Kazarian came out to announce that he has left AEW and has signed a long-term contract with Impact. It was a good promo from Frankie and a pleasing move for him. Faced with the choice of being complacent, taking the bag, or being a bigger fish in a smaller pond, he’s backed himself and gone elsewhere. Ultimately, that’s what competition and options in the landscape should mean.

I was very pleased with how this came together. As someone who has always been a big Joe Hendry guy, it was great to see him get the chance to show off his skills and how much he’s improved since his first Impact run.

Hendry got to show off his power offense, notably with a Trust Fall to the outside and a walking Suplex around the ring, and Moose put in the effort in a way he always does on Impact’s big shows.

The finish, or should I say both finishes, did bother me. Moose initially cheated to win, hitting a low blow on Hendry when the ref’s back was turned, only for the new ‘Director of Authority’ Santino Marella to come out and restart the match. From that point, there was only going to be one winner, Hendry duly hitting the Standing Ovation to retain. ***1/4

My rating here is based on the work of the match, which was good and engaging. The Marella stuff bothered me though. I’ve watched enough wrestling over the years to hate on-screen authority figures. Regardless of how they’re booked, they always come across in a cringeworthy way and I can smell a feud a mile away between Marella and Scott D’Amore for control of the company or something. Not for me. More broadly, I don’t feel hugely comfortable with Impact bringing in and investing in a man that not only booked Marty Scurll last year but doubled down on it.

Albeit a little shorter than I thought it would be, this was decent.

Although there were a few wonky moments, all four women got time to shine here. Why, for instance, did Taylor Wilde kicking Killer Kelly in the face allow Kelly to get out of the submission she was in and lock in one of her own? I feel bad picking out that moment, as Kelly was the standout performer, but it bothered me.

I had a concern down the stretch that they were going to go with a double winner or something contrived, but in the end, Masha hit the Snow Plow on Purrazzo and Kelly before pinning Wilde for the win. ***

These two started outside in the arena car park, giving it a different feel to the other ‘hardcore’ match on the show.

From start to finish, this was more or less a spotfest but I enjoyed it a whole lot, probably to the point of being the high man. Look, I’m not going to not pop for Maclin diving headfirst into the industrial bins and Swann hitting a Cutter on the pavement outside.

I loved the fact this actually finished outside the ring, with Maclin pinning Swann after hitting the lifting DDT on the ramp. That gives Maclin another big win and a title shot (and win) shouldn’t be too far away.

I sorely miss Eddie’s old ‘I am the fire’ theme, but I’ve got a lot of time for him dying the top of his Mohawk green. Boston represent.

These two put together a match that was everything I hoped it’d be. They clicked tremendously and the more technical stylings brought out the best of Edwards and allowed them to tell a compelling story.

Whether he was sliding in the ring when Edwards came out or hitting forearms to his opponent’s left arm rather than his head, Gresham was repeatedly able to outsmart Edwards. On the flipside, you had Edwards exerting a power advantage. His chops knocked Gresham off his feet almost every time until Gresham decided that his best form of defence was puffing his chest out as a blocker.

These two traded hold, counter-hold and pinning combination in an exciting finishing stretch that eventually saw Edwards triumph with a Boston Knee Party. ****1/4

Although the finish was a surprise, as I expected Gresham to win, the post-match wasn’t. PCO returned after being buried alive by Edwards a couple of months ago, spitting sand out of his mouth and attacking him with a shovel.

If you were invested in the story coming into this match, these women went out there and delivered something special. As I waxed lyrical about it earlier in the week, you’ll know that I loved this.

Given the time investment Impact had made in the story and the build, putting this on last was absolutely the right call. James’ entrance, paying tribute to her Native American heritage, was lovely. Her tears, rather than being the cringy performative ones you get from a Liv Morgan, symbolized the occasion – being authentically herself, she was confronted with the reality that her lengthy career could be minutes away from ending.

Retirement stipulations only work when it’s genuinely believable that the person involved is legitimately coming to the end of their run. I was fully immersed in the idea of James being done with wrestling, so every big nearfall in this match had me bouncing off the edge of my seat.

The match itself was fantastic. James was the valiant babyface veteran, trying to squeeze out every last ounce of fight and fire she had to enjoy one more moment in the sun. Grace thrived as the de facto villain, her power offense giving the match the dynamic it needed for James to chase from underneath.

Grace was tremendous here, delivering the most complete performance of her Impact career. The Superplex off the top rolled through into a Jackhammer was a brilliant spot and she sold the nearfalls brilliantly, particularly after the MickDT.

In the build-up, I thought the finish would involve a turn for either woman. In reality, it didn’t, but it sets the stage for one in the coming months. Mickie James tapped out while in a rear-naked choke but the ref didn’t call for the bell. That saw Grace relax her grip and moments later, get put down for three with a Tornado DDT.

This was Mickie James’ second successive Hard to Kill main event. Unlike in 2022, this match was an absolute home run that paid off a brilliant story in spades and delivered in a big way. Special, memorable and, in my view, well worth your time. ****1/2

Post-match, Mickie’s son Donovan and her immediate family, sans husband Nick Aldis, hit the ring for an emotional celebration to close the show.

Hard to Kill was a good show. The pre-show irritated me a lot with the successive recycled finishes and I bristled at the Santino reveal later on but everything was good at a bare minimum.

The opener overdelivered massively, Eddie Edwards and Jonathan Gresham had a banger and the main event was special, something I’m almost sure will be on my 2023 Match of the Year ballot. The false tap was an interesting spot and it took me out of things on first viewing but now being a bit removed from viewing it, I like it more as it’s clearly a story device.

If you’re pushed for time, watch the last two matches, but all in all this was an easy watch at just under three hours and a noteworthy show for Impact to kick off their year in earnest. 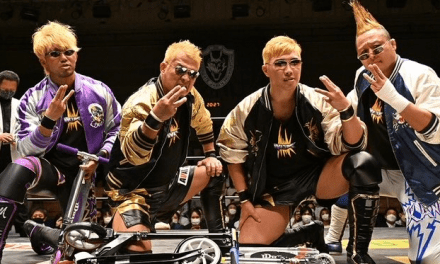 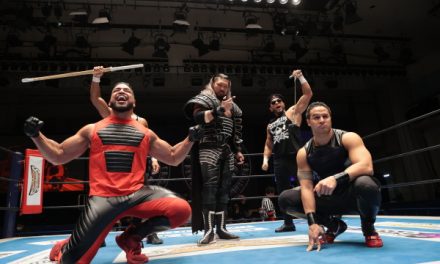