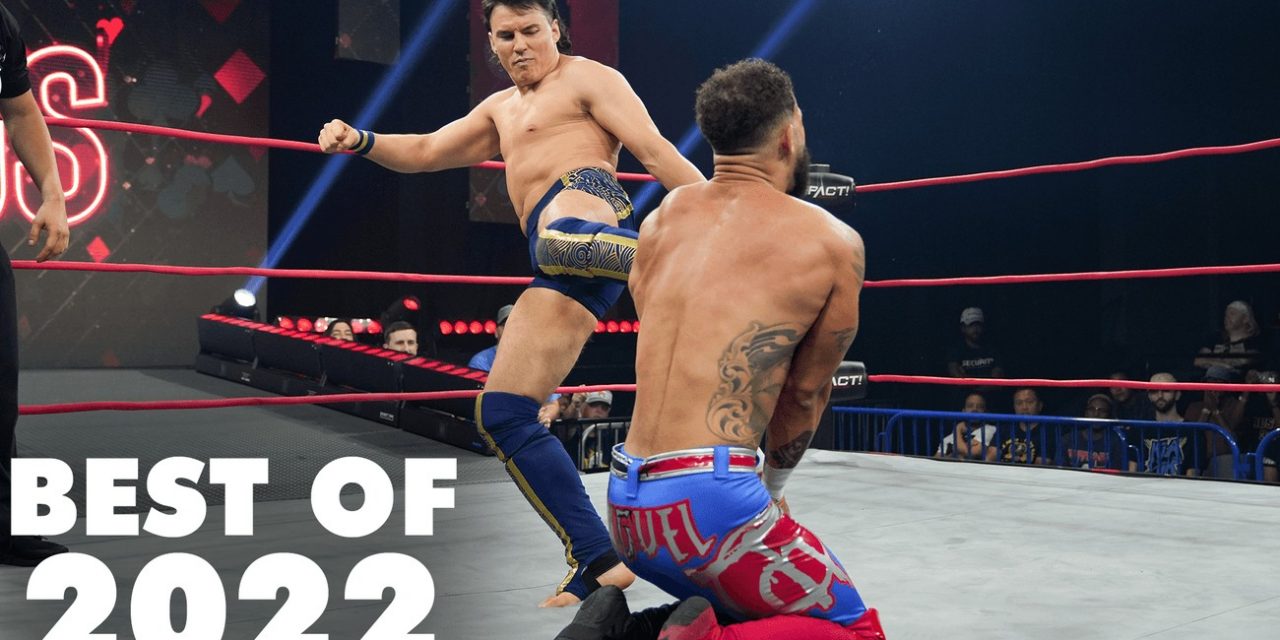 Welcome to my top ten pro wrestling matches of the year. If you enjoyed this article and want to read more of my writing, you can find my archive here.

In discussions on what makes a match, Match of the Year standard, I’ve perceived a vague split in the wrestling fandom between those who believe that quality can be measured objectively and those that see quality as always subjective. It’s more of a spectrum than a strict binary, but I’d certainly classify myself as leaning much more toward the side where quality is a subjective taste. That isn’t to say that there isn’t a certain objectivity to enjoying wrestling. A lack of botches, athleticism, the workrate of the match, the variety of moves, and even the crowd are mostly objective variables.

But there are so many more intangibles that affect our enjoyment and investment in a match. Art is not a standard molecule of information that is injected into our heads, but a way of communicating that we all consume differently owing to the different places in which we stand. We might enjoy a match because the story connects with us on a personal level, or maybe we’ve been following the wrestler for a long time and are invested in their career, or perhaps there is an element of psychology to the match that we love more than others.

This doesn’t mean we are islands. Our tastes are shaped by the people we interact with and it follows that different milieus will end up sharing much in common when it comes to taste. And that’s great because sharing a love for something with others is one of the best feelings in the world. I think the point where this often becomes toxic is where a group ends up believing that their shared taste is objective and that others who have different tastes are somehow wrong. The community as a whole suffers when we can’t disagree with each other in a comradely fashion.

All year-end lists, countdowns, and halls of fame are popularity contests, and they often function like icebergs, concealing more than they show. The thing I love about the annual Voices of Wrestling Match of the Year list is its unrivaled depth. There’s not much else in the wrestling media quite like this. I’d be lying if I said the order meant nothing to me because seeing that others liked the matches you liked is a nice feeling, but at the same time, this is a list where the so-called “Sadness Village” matches that few people voted for is just as full of great matches as the top ten. Taken as a whole, these lists are incredible documents for contemporary and future lovers of the art of pro wrestling.

I’m proud to be a part of this tradition, and without further ado, here are my nominations for 2022’s greatest matches.

Impact Wrestling Against All Odds Review

It often feels like North American junior, the high flying, high-speed style that traced its roots through ECW, WCW, and the X Division of the 00s, has nothing left to give. After all, there are limits on the human body in terms of speed and agility. Saturation too has made a match that would have been talked about for years in the 1990s become just another weekend on the circuit these days. Not necessarily a bad thing, but for North American juniors, it’s been quite a while since the bar was raised.

This is where the bar was raised.

Both Miguel and Bailey would have been superstars in the 1990s with just a quarter of their current move sets. Today, they are both excellent wrestlers, and anyone who had seen their output up until this match would have certainly had few poor words to say about them. And above-par creativity and silky smooth strikes and flying attacks would make any match between these two a show-stealing spectacle. What elevated this match was the storytelling. There was no real feud going into this, but everything was told in the ring. Selling alone is not enough to elevate a match, and it’s often that the ‘sell’ has become an almost perfunctory part of a move; something to do while the next fighting sequence is uploading.

For Bailey and Miguel, selling was not just an epilogue quickly forgotten, but integral to how they moved around the ring and developed new strategies for conquest. When Trey delivered a flying head scissors from the ring to the floor, it was not simply a great move, but a moment of pure utilitarian sacrifice, delivering high damage to Bailey at the cost of continued injury to his legs.

It was those moments that made this a joy to watch on multiple levels. A feast for the eyes in terms of athleticism, grace, and ability, and a gift for those who want all that and more too. My match of the year 2022.

So early in the year that people may have forgotten it, and in many respects, the story of the year in TJPW was Miu Watanabe’s run in the summer’s Princess Cup, nothing in TJPW dislodged this match from my own list. I’ve often written about how the grammar of TJPW’s matches is one where highspots are the punctuation rather than the words. It’s a house style where psychology and in-ring storytelling matter and where long-term viewers are rewarded. Every now and again, the very best in the promotion get a chance to go out and have a BIG MATCH where, to torture the punctuation analogy, the exclamation marks are used very liberally.

With the somewhat obligatory grappling component finished, it’s a match that really hits its stride and never really lets up. Yamashita is the base here, with Mizuki bouncing around the ring and alternating between knocking Yamashita down and bouncing off her. And you know we’re really in big match territory when Mizuki’s super secret Whirling Candy move comes out.

It’s the title match that wasn’t really supposed to happen. With KO-D Openweight Champion Tetsuya Endo forced to vacate what presumably was going to be a long reign, and DDT’s most obvious stand-in, Konosuke Takeshita, more set on an American excursion at this stage in his stage, the DDT bookers were forced to play with the hand they had been dealt. It probably couldn’t have gone any better. It was decided that the winner of the annual King of DDT tournament would be crowned champion and here we were at the finals, with two wrestlers who had never held that top belt before, an exciting premise for a match in itself.

This was everything you would have expected from the two wrestlers, high impact strikes, bombs, and throws, but it went from great to classic from that premise and the way that both Higuchi and Yoshimura rose to it and, despite the circumstances, demanded their seat at the table. There are matches that are great and there are matches where you feel history turning on its axis. This is one of them.

Ganbare’s selling points is very much on the vibes. To watch the promotion and idly rate each match out of five feels incredibly vulgar for such a fun-filled promotion. It’s a rag-tag ensemble of men and women who didn’t fit in elsewhere and decided to stop working for others and work for themselves. It’s more of a team than a roster, really. Ganbare is a Japanese phrase loosely translating to “Go for it!” or “Come On!”. It’s the sort of phrase you shout to your babyface champion as he valiantly fights against a much stronger opponent.

Which is the story of this match, really. Imanari’s gimmick in Ganbare is much purer than his DDT Pheromones gimmick. It’s almost a bit of a Ganbare cliché, but Imanari is the perennial underdog, who this year became the promotion’s top champion in one of those brilliant moments where wrestling seems to connect with the human story. Anyway, this match is the best I’ve seen from his title reign, and my god is Irie underrated or what. It’s bizarre that he is not signed anywhere right now. This match features probably the most disgusting cannonball senton you’ve seen, with Irie’s explosive offense bending Imanari the wrong way.

But this is not really an underdog story; it’s more about perseverance. Imanari began all guns blazing and had a strong start, but over time, Irie wears him down, until Imanari can barely stand, and the only move he can is too put all his remaining energy into a sleeper hold. It’s a unique ending, and a match worthy of your attention if you’re unfamiliar with Ganbare.

I’m a stickler for using the term ‘workrate’ for it’s intended meaning: the rate of work within a match, i.e., the ratio of action to resting. Not that resting is always bad, or that constantly moving is always good, but workrate has a meaning distinct from ‘great’ when it comes to assessing matches.

This was a great match. It was also a workrate match. For 60 minutes (ok, 59 minutes), these two just went at it, moving from canter to tror and back again and never really letting up. I normally hate matches that go long for the sake of going long, but I was never bored during this match, as I have been during other critically acclaimed hour matches.

Look, you could easily fill a top ten list with Josh Alexander matches this year, as you could with Mike Bailey. So it’s fitting that in December, these two set their flag in the ground for what will probably be lauded as a classic for years to come.

Sat in the middle of the card, and clocking in at just a little over ten minutes, this may be an unlikely MOTY contender for some, but for me, this was a rich buffet of wrestling from two of the most underrated and underutilized talents in Japan. This was beautifully executed, with a little bit of everything, from hard hitting, to high flying, to comedy, to hardcore, thrown in. I wanted to watch these two wrestle for hours when this match ended. Perfectly executed.

Eight wrestlers, four tag teams, and a match that ran like intricate clockwork. A joy to watch, full of innovation and daring. Part of the CyberFight festival, in many ways this was a ‘get everyone on the card’ match, but this went above the remit.

My obligatory, “I don’t like deathmatches, but…” entry. A wild, ultraviolent affair that was supercharged with a virtually infinite source of energy. Every time you thought this was over, they just kept going.

I love this match, cause it’s one of those times when you literally see someone getting over in real-time. Steve Maclin had a fairly unnoticed run in WWE, and thus his signing to Impact was hardly met with much bells and whistles. Being booked as a jobber-squasher for his early run and a throwback Punisher-lite gimmick, there wasn’t that much to get excited about.

A classic big man vs. high flyer combat, Maclin showed his explosive side in a match up that played to his strengths and elevated him even in defeat. Miguel really showed this year why he’s one of the best juniors on the planet right now, and this was the opening overture to a year of greatness.

Watch on FITE / Wrestling Revolver Tales from the Ring Review

I firmly believe there’s a place for comedy in wrestling. Sure, when it doesn’t hit, it’s embarrassing for all involved, but when it does, it’s something approaching the sublime. This was the latter: a campsite-based stipulation with all kinds of relevant gimmick weapons: tents, smores on skewers, bug spray. It’s silly, incredibly silly, but it’s funny, and the crowd were as hot as a glowing campfire. 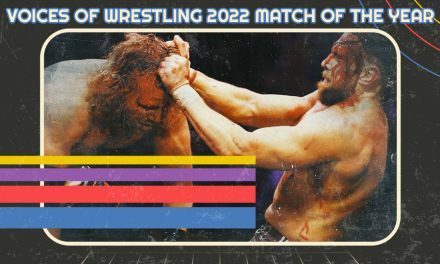 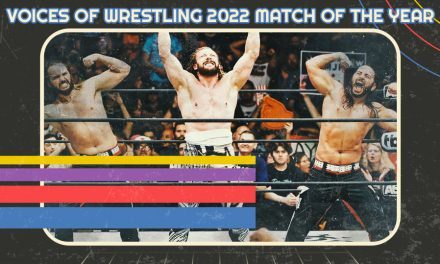 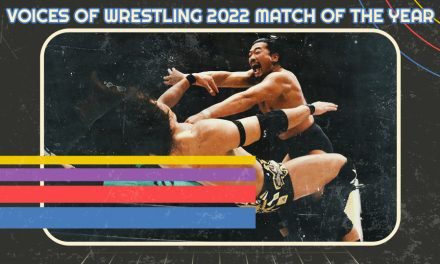 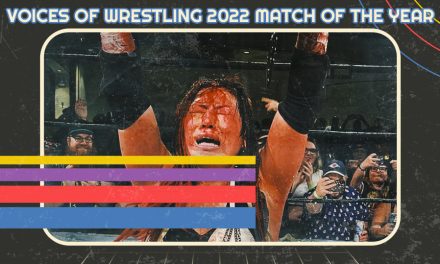