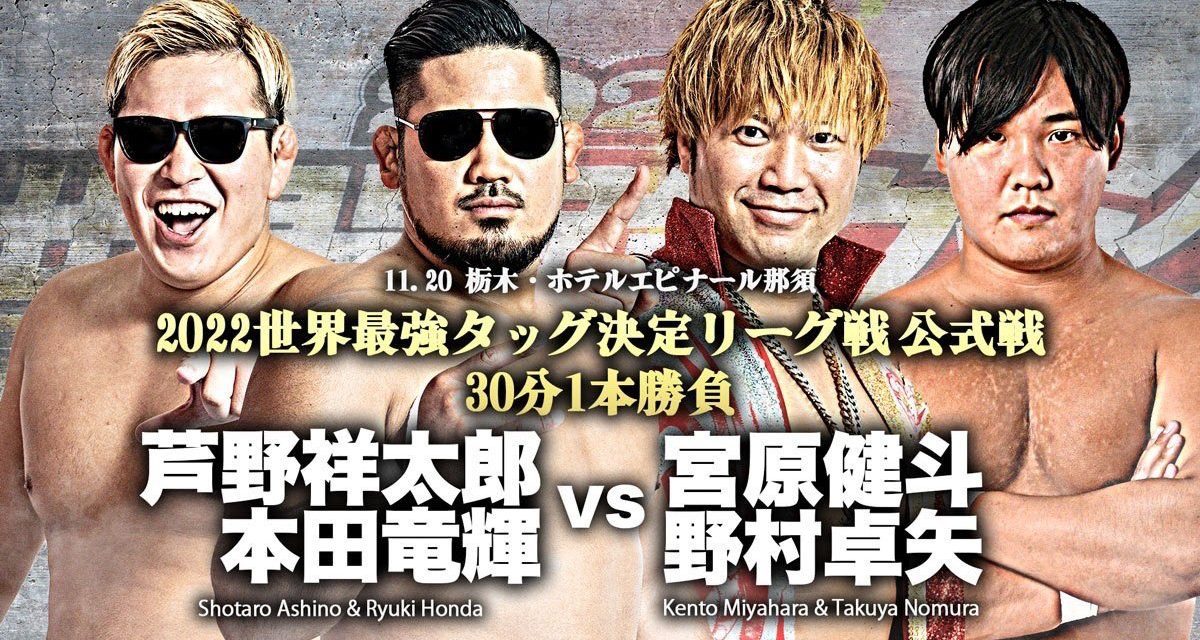 HAYATO flew around a lot and Tamura would then cut him off. I’m not sure you can call Tamura a great base for a high flyer, but he did well enough here. HAYATO looked great though.

Tamura pinned HAYATO with the Death Valley Bomb after finally getting some sustained offense in.

HAYATO’s improvement over the course of this year has been impressive. ***¼

KumaDoi worked over Miyahara for a while. Nomura got a hot TAG but not long after KumaDoi took over and Miyahara and Nomura had some miscommunication.

Miyahara made his valiant comeback against Arashi and he and Nomura finally managed to land their double knee strike. Miyahara then pinned Arashi with the Shutdown German Suplex.

The work here was fine but given the length it never really developed into anything special. It wasn’t boring, it just lacked that spark to take it to a higher level. ***¼

Voodoo Murders attacked before the bell because of course they did. This led to brawling all over the venue.

The Saito Brothers were also at ringside and they attacked Aoyagi when referee Kyohei Wada had his back turned. When things finally got back in the ring, it was Aoyagi who got worked over.

The Saito Brothers distracted Wada and then Suwama used a chair on Aoyagi. This led to more brawling outside and a countout.

Apart from a brief minute in there between Lee and Suwama, this stunk. *½

Anzai got worked over, but Cyrus wanted to take it to Nagata, who had humiliated him at the beginning of the match by offering a test of strength but then kicking Cyrus in the leg as a fake out.

Nagata managed to hit the Exploder on Ishikawa which looked impressive. Anzai hit a belly-to-belly and a vertical suplex on Ishikawa which also looked good. The Big Dog was bumping in this. Anzai also used a Nagata Lock II on Ishikawa, so expect that to be his main submission hold.

Anzai kicked out of a running knee from Ishikawa which has put away rookies in the past. Ishikawa then used Splash Mountain on Anzai to get the win.

Despite Cyrus’ limitations and Anzai’s inexperience, I enjoyed this. It told a classic pro wrestling story, having to try to defeat much larger men. And the closing stretch between Anzai and Ishikawa showed just how much promise the super rookie holds.

While this was a smaller show, it was still a significant vote of confidence in Anzai to be put in the main event spot here. ***¼

These guys got right down to business and wrestled at a quick pace. Omori reversed a Sunset Flip but Inoue kicked out of that. Inoue got up, delivered a thrust kick to a still seated Omori and used a Jackknife Hold to get the win in a big upset.

This was the biggest win of Inoue’s career up to this point and the crowd gasped at the result. Pretty darn good little match for something that went less than four minutes. ***

HAYATO managed to go toe-to-toe with Sato here. Then out of nowhere, HAYATO hit a Package Tombstone for a near fall and then won after the Sid Vicious, a top rope Lionsault. While it is probably named after the infamous bassist of the Sex Pistols, in my head canon it is named after the wrestler.

This was building into something good until the somewhat abrupt finish. Still, it was good while it lasted.

Also nice to see Sato putting over some of the young guys in this tournament. ***

Anzai got worked over a bunch, then Nagata did. They eventually managed a comeback and Anzai hit a sweet looking belly-to-belly suplex and a Butterfly Suplex on Arashi. The kid is strong.

Arashi made Anzai submit in the Argentine Backbreaker. This was bland for the first few minutes, but really picked up towards the end. ***

The Saito Brothers attacked before the bell. They proceeded to work over Aoyagi for a while. This was kind of boring.

Things would pick up later and the Saito Brothers actually started to look better in this match when they could just trade big moves with Aoyagi and Lee.

Lee pinned Jun with the D4C while Aoyagi had Rei in a Guillotine Choke. ***

Suwama and KONO came out after the match for a beatdown and this once led to an ECW style transition into the next match.

Thing started off with the usual brawling outside the ring but it soon settled into something actually decent with lots of big men on big men action.

They was halted when Suwama put referee Kyohei Wada in a Sleeper Hold. That allowed the Saito Brothers to interfere.

But Cyrus and Ishikawa persevered and Cyrus pinned KONO with a Vader Bomb.

There was a decent match in here for a little bit, but more interference is really distracting. They should have kept this the battle of the large men. **½

Miyahara and Nomura took control early and worked over Ashino. Honda and Nomura worked well together with raw power vs. technique from each man respectively.

The odd couple team of Miyahara and Nomura once again missed their double knee strike and collided into each other, and it was mostly downhill from there. GOA never let them gain control again for any significant length of time.

In the one moment where things looked like they were going well again, Ashino escaped from a Shutdown German Suplex attempt and ruled into an Ankle Lock. Miyahara tried to escape but eventually tapped.

A big win for GOA, though not the first time Ashino has made All Japan’s ace tap out. This was good, but not great. There were some solid sequences and I thought Honda and Nomura especially looked good. But for whatever reason it didn’t coalesce into a high end match. It could have used a more thrilling closing stretch. Miyahara just kind of went for his finisher and Ashino countered it. These teams absolutely have a better match in them.

In their post match promo, GOA mentioned Suwama a couple of times so I tend to think they are winning the Real World Tag League en route to winning the World Tag Team Championship back in January. ***½

These two tournaments continue to chug along and we’ve reached the half way point. They have been good, but not anything you need to go out of your way to see. The Voodoo Murders interference continues to be frustrating.