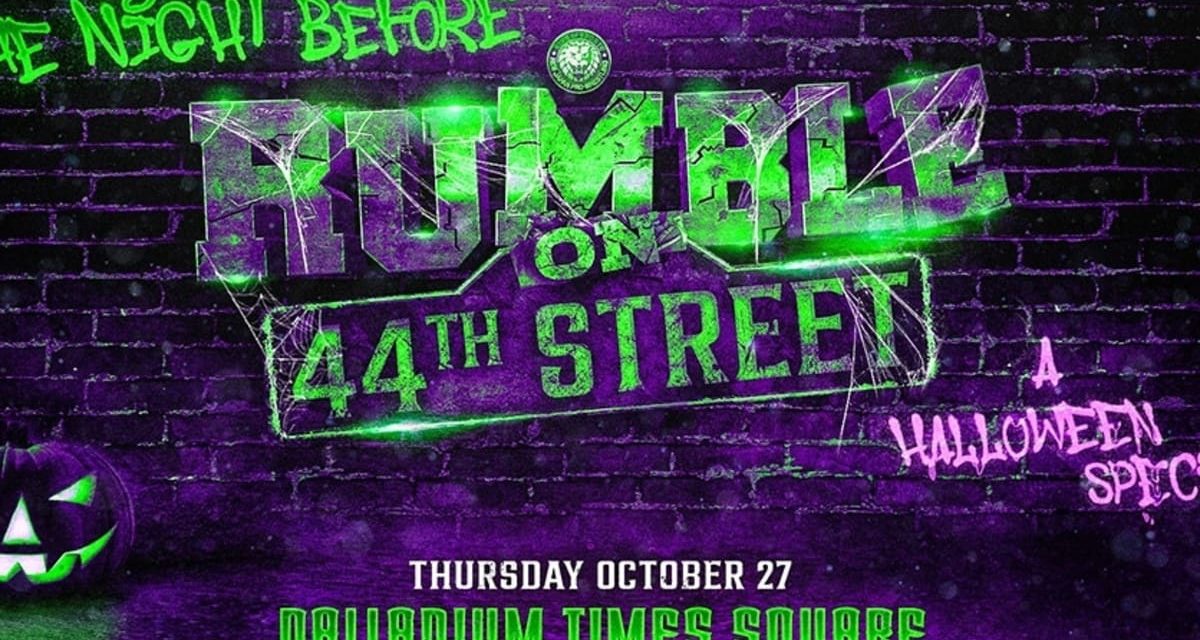 Welcome to night one of two nights of NJPW pro-wrestling action in New York City. I am excited about this show for a big curious reason, I have no clue what’s going on. Legit, there is no card. We’ll find out who is doing what and who is facing who throughout the night, and that adds a level of excitement and intrigue. What match-ups will we get? Will we get any surprises or style clashes? I know one thing for sure, tonight is probably going to be one hell of a fun evening. Anyway, with that small opening out of the way, I am your magic writing girl, and let us get on with the review!

The first surprise of the night is Koslov stepping back into the ring as Romero’s tag team partner. Forever Hooligans reunited! IF I took only one thing from this match, it’s that Kevin Knight is talented AF. To think he’s just going to get even better and I instantly find myself rooting for him. This was a fine opener. Hooligans got to play their hits, DKC and Kevin Knight got to showcase their abilities, with Knight really shining,  and this was a fun little opener to get the festivities going. Romero and Koslov still work well as a team and it was fun seeing them get to perform again. Then throw in that Kevin Knight gets the nice win for his team in the end, to set up their participation in the triple threat tomorrow, with a small package, and I would say this match ended up succeeding. ***1/4

Crowbar? CROWBAR?!?!?! Well, I wouldn’t have predicted that one by any stretch. In 2022 I’m watching Crowbar wrestle Fred Rosser in New Japan Pro Wrestling. Crowbar got a surprising lot of offense in this match. Also got more time than I was expecting as well. I thought this would be a quick match where Crowbar got some offense and then Fred Rosser would beat him down for the victory, but this got some time to progress, and to be honest it wasn’t bad. Crowbar did his best with what he still has, and to be fair, he did account for himself nicely. This isn’t a go-out-of-your-way-to-see match or anything, but it was pretty solid and fun, which I feel we’re going to be getting a lot on this card. Rosser has been a delight and a revelation on NJPW Strong and that continues. I had fun, and Crowbar can leave this match happy with how things turned out and how he did. ***1/4

Post-Match John Gresham comes out to challenge Fred Rosser, no doubt in hopes of improving his PWI Ranking for next year. They will wrestle on the Rumble on 44th Street Show!

Once again, I wouldn’t have guessed this match-up ever, which is making this show continue to be fun. This was kept short, and it was okay. I really didn’t get that into it myself, personally, although the crowd seemed to enjoy it. Of course, S.A.T hit the double Spanish fly which the crowd wanted to see so that was smart even though it didn’t get them the win. Everything was okay, I can’t call it bad, but it didn’t click with me all that much. S.A.T looked okay and did fine.  Aussie Open is one of the best tag teams in the world right now and they did well for what this match offered, but that’s about it. The random match pairings have been fun so far, regardless.  ** 3/4

Dorada’s entrance gear is a pretty darn good homage to Jushin Liger and is appreciated. This match was a nice mix of established talent and two H.O.G (House of Glory) wrestlers looking to use this platform to make their mark(s). This show is weird and I respect it for that. If you are going to do a mystery vortex-style show, might as well throw shit at the wall and see what sticks, right? Keep things going, that was the key to this match. Keep things going, and they did exactly that. Might Mante did well, but I think Smiley is who impressed me more of the two H.O.G competitors. It was fun getting to watch him perform for the first time. This was good, the most fun I’ve had in the night so far. Nice getting to be introduced to two new wrestlers and Dorada and Bailey are always entertaining to watch perform. Things went very well in this match and it kept a good pace and never gave us a chance to get bored with it. Bailey gets the win pinning Mante in a good sprint of a match. *** 1/2

Suzuki is always a welcome addition to any show! Tracey Williams is a good performer so he’s a nice choice of a challenger for Suzuki on this night. Suzuki was clearly having fun, and he and Tracey Williams went on to have a good but by-the-numbers match on this night. Suzuki, with rare exceptions, usually goes by a routine formula these days, BUT that formula is what we the crowd and audience want so that’s not necessarily a bad thing. Tracey Williams fits the formula fine so it makes for a good match that doesn’t stand out, but definitely doesn’t over stand it’s welcome. Tracey Williams gives a good effort against Suzuki and felt like he belonged against Suzuki. Tracey Williams is not afraid to take a good shot here and there, and also not afraid to give a good one in return, and of course, we get some of those shots in this match. The winner is never in doubt, and Tracey never does anything to make you think he can pull it off, I’m afraid. This match is by the numbers, but nicely done, and I liked it. ***1/4

Jake Something!!!! Against Shingo? We are really talking now!!!! Jake Something gets a GOOD amount of offense against Shingo and, not surprisingly, does a great job of showing he can go toe to toe with the former IWGP Champion. Shingo allows I won’t say make, Jake Something to look great against him, and as a result, the match benefits from it greatly. They slug it out quite a bit having some nice little fights during the match. This was quite enjoyable, and personally might be my favorite thing of the night so far. I wish it had gotten a few more minutes actually. Jake Something’s credentials as a talent don’t need to be explained by me, but as more and more eyes continue to gaze upon him, I can’t help but think he’s got good to great things coming to him ahead, and I hope they come to fruition. I’m glad this show decided to match these two together, it worked out quite well for all of us. A very strong  ***1/2

Up to this point has been a really fun show. Star ratings may not be the highest, but everything has been fun, and then this match shows up with so much talent. Of course, an Jon Moxley appearance makes this Moxley fangirl swoon! Matches this large can always be a mess, but as the theme of the night goes, it was very fun. Team Filthy was dressed as nuns, Amazing Red made a wonderful surprise appearance, we got fun spots and sequences, and we had a very good main event that I enjoyed.  I’m not the biggest YOH fan but at one point before he was eliminated he went into a body slam fest which was highly enjoyable getting everyone except Jay White. Amazing Red was treated well and got to look good in spots throughout the match and got an elimination. If I had any big complaint, the first five eliminations came way too quickly without much going on between them. I understand it to an extent with so many competitors on each side and time constraints, but I’m never a fan of rapid-fire eliminations with minor exceptions.  We got interactions with Lawlor/White and Okada/Kingston to set up the main event for tomorrow night which is to be expected and is smart. After the first five eliminations, things settled back into a proper groove and the match continued to move along nicely and give us good action throughout with the remaining competitors. This match was nearly 30 minutes long and, to me at least, I never once felt the long amount of time. That isn’t always something that’s guaranteed with matches of that length. In the end, Moxley and Kingston would be the final two remaining, giving us a feel-good ending to a wonderfully weird but fun night of wrestling. I wouldn’t say this match reached great, but it was probably my favorite thing on the show tonight and was very good. ***3/4

Real talk, you aren’t going to have anything must see, or go out of your way to watch on this show. What you get though are nice surprises, weird matchups, and a very fun evening of pro wrestling. That’s all this magic writing girl wanted at the end of all of this. In the end, I really thought this was a good show, an NJPW show you won’t often see with matchups they otherwise will never put on. I thought everything was good to sometimes very good, the crowd was clearly enjoying themselves, and it was a nice warm-up for Friday’s show. I do not regret watching this. 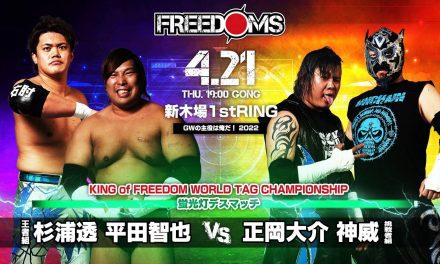