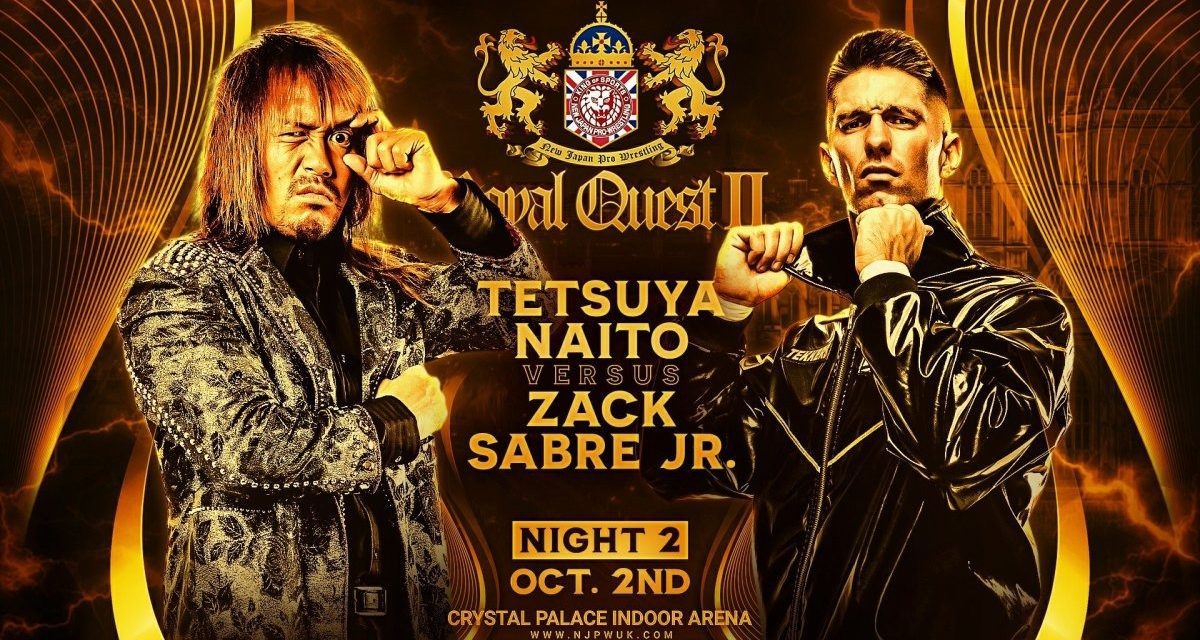 On October 2, I was one of the 1,966 in attendance at the National Sports Centre in Crystal Palace for the second night of Royal Quest II, New Japan Pro Wrestling’s first visit to the UK in more than three years.

Here’s my review of the show, headlined by Tetsuya Naito and Zack Sabre Jr. squaring off for the next shot at Will Ospreay’s IWGP United States Heavyweight Championship.

One of the things I was most excited about on these Royal Quest shows was the RevPro regulars getting the chance to show what they could do in front of the New Japan officials in attendance.

Both Oku and Robbie X seemed fired up to be in this spot and they worked hard to give good accounts of themselves in what was a fun opener.

The one thing dragging my rating down is the finish, which seemed awkward; Robbie X fired up and then got immediately taken down with a roll-up and pinned. Whether that was how it was supposed to go down or what, I’m not sure, but it felt odd in real-time and the crowd reaction was appropriately muted. **3/4

Having been out of action for almost ten months, it was great seeing Ethan Allen back in the ring. It was clear throughout how fired up he was to be out there again, which makes it all the more disappointing that he’s since announced he’ll be out for another period of time because of persistent knee trouble.

Luke Jacobs has come on massively in Allen’s absence, developing this Walter-esque physique and gimmick. He’s fantastic, easily one of the British scene’s best assets, and his exchanges with Hiromu here were a lot of fun.

Both teams worked hard (yes, even Sanada) and the match built well down the stretch. A Doomsday Device gave the Young Guns a good near fall before Sanada picked up the win with Skull End. ***1/4

These two tried, they really did. The crowd even seemed somewhat into it, but the main issue was that Ava White just wasn’t ready for this spot and wasn’t very good.

Kicks were presented as a big part of White’s arsenal but they all looked uncoordinated and out of control, while her screaming in every exchange, eerily reminiscent of peak Maria Sharapova, really took me out of proceedings.

There were also two horrific-looking botches in the finishing stretch, most notably when an attempted move from White saw Gabert dropped on her head. The German returned the favor with a suplex that got her the win and sees her advance in the tournament to face Kairi. *1/2

Gabriel Kidd being back in a New Japan ring is a very pleasant sight – if the lad is in a better place mentally and he can stay there, he’s got all the potential in the world to be a really big deal in this company.

FTR were unsurprisingly incredibly over, with Dax showing off his scars from their banger the night before with Aussie Open. I’m assured by friends who were there for Night 1 and Night 2 that it was easily the best match across both shows.

Shota Umino was the other highlight in what was a tremendously fun match. He just gets ‘it’ now – he looks better and he’s showing off real fire in the ring. There’s just an aura to him now which makes me really excited for his future.

British Heavyweight Champion Ricky Knight Jnr was the last man from his team to see action and he ended up eating the pin, an Eliminator from Great O-Khan putting an end to his night. O-Khan might have broken a rib in the process but that result furthers the story of him never being pinned in the UK, allowing Gideon Grey to remind us that he’s undefeated and setting up a future title match in RevPro. ***1/2

When New Japan last came to the UK in 2019, I was genuinely stunned at how over Guerrillas of Destiny were. This time though, Tama Tonga’s babyface pop was both expected and deserved. His career has been given a new lease of life this year and he’s doing some of his best work.

Karl Anderson might be more washed than people thought he was but he was fine here in what was the most BULLET CLUB six-man you’ve ever seen. You had comedy, unexpected Festus chants for Gallows and a steady closing sequence that saw Tama pick up the win to gain some momentum going into his title challenge at Declaration of Power. ***

Who’d have thought six months ago that Bad Dude Tito would be one-half of one of the most important matches in New Japan this year? You can never predict pro wrestling, right?

As a match, this was pretty paint-by-numbers. Tito got some offense in, allowing the valiant ace Okada to overcome adversity and record a win over a faction member of his next big opponent. Still, it’ll never not be enormously cool seeing Okada in the flesh, so I’ll give this a gentleman’s three. ***

The original plan here was for Ishii to wrestle JONAH, with the Australian certain to go over to build to his upcoming match with Okada. However, Hurricane Ian put paid to his travel and in his place Yota Tsuji, who’s been on excursion with RevPro, got the call to face Ishii.

Knowing this was an enormous opportunity for him, Tsuji absolutely killed it. He looked right at home in the big strike exchanges with Ishii and his use of kicks and knees from slightly unconventional angles told the story that he’d got tricks up his sleeve to keep the veteran on his toes.

Ishii, who is one of my all-time favorites, was at his imperious best. Yes, perhaps it didn’t deviate too far from what has become the Ishii playbook in the last few years, but he gave Tsuji a lot. He did that thing where he sucks you right into that babyface vulnerability vortex, making you believe that he could lose at any moment but is always inches from victory. To that end, he gave Tsuji some near falls that I don’t mind admitting I bit on massively.

It’s often been said that you can sometimes get over more in defeat than in victory. That was 100% the case here as Tsuji enjoyed a real coming of age. Perhaps the biggest testament to the quality of his performance is that the crowd, whose initial reaction when he walked out could honestly be described as tepid, immediately got to their feet to give him a standing ovation as soon as the final bell rang. ****1/4

As you’d expect, the work here was very good. I’m not normally a comedic stalling guy but these two worked very well early on, with Zack’s mocking of the tranquillo poses being particularly good. Meanwhile, Zack’s attacks on Naito’s arm were as gnarly-looking as ever. However, I couldn’t help but feel that something was missing.

It seemed as though, at least from where I was sat, that Naito got knocked a bit loopy towards the end and a couple of uncharacteristic miscommunications and sloppy moments followed. Whether that was a factor or not I’m not sure but it definitely seemed as though this came to an end without ever hitting top gear as matches between these two have in the past. So, all in all, very good but not great. ***3/4

When I mentioned in the VOW Slack that I was attending this show, Chris Samsa asked me what I thought of the card. I said, “Ok… I think”. I was undoubtedly excited for New Japan’s return to the UK after a three-year absence, but there wasn’t a lot on the card that looked as though it’d blow me away.

When all was said and done, the show massively over delivered relative to my expectations. Aside from the women’s match, everything was good at a bare minimum and the last two matches were very good. Getting to see Ishii at his best and Yota Tsuji become a made man before my very eyes was special. 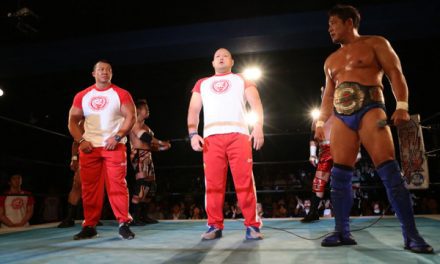 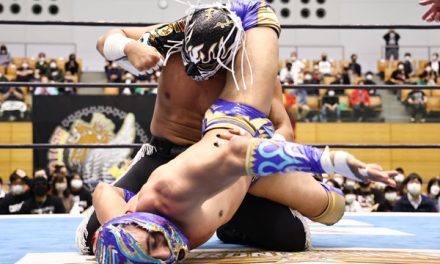 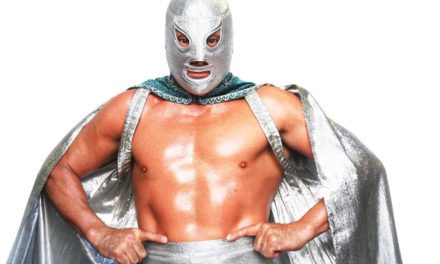