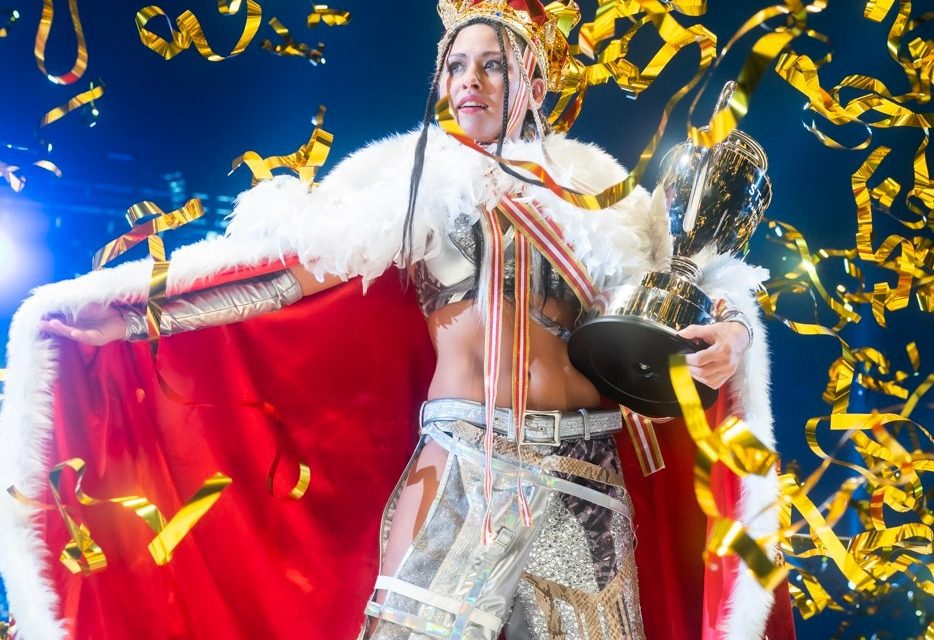 After 20 shows and two months’ worth of action, the final of the 5STAR Grand Prix is here and it is all on the line. Last year’s final was one of the best Stardom shows ever and this year could surpass it with ease as Suzu Suzuki and Giulia are set to collide in a Joshi dream match, Hazuki and Momo Watanabe run back their great match from Sumo Hall, and Mayu Iwatani takes on protege turned rival Starlight Kid. Let’s not waste any time and get right into what could be a special show.

There’s no better way to kick off a show than with some good hoss shit. Iida manages to play both a powerhouse and an underdog at the same time which worked really well against the onslaught of lariats and big moves MIRAI threw at her. ***1/2

I respect what they went for in this one but trying to pay off a feud that’s taken place entirely on Twitter was never going to hit. The attempts to inject some hatred and drama felt somewhat artificial when just a week ago these two were spraying one another with water guns in a Cosmic Rules match. Both are good but what they went for didn’t hit at all. ***

Hazuki choked. After getting off to a 7-0 start she finished her GP with five straight defeats to throw away her chances at victory. This defeat will hurt more than the rest as Watanabe and Oedo Tai cheated to get the win while laying a beatdown on Hazuki. The match itself was great as Hazuki and Watanabe always channel the best of themselves when they compete and this one was loaded with really great hard-hitting exchanges. ****

This was just kind of awkward. Not only did they not click but the double count-out finish was really poorly done. A real miss on an otherwise strong show so far. **3/4

What stood out was the emotion this match brought out of Kid. Kid’s usually cool, cocky presence was replaced with desperation to beat her former mentor as the match wore on. This isn’t the first time that Kid’s heel facade fell in this tournament and both times it came against rivals that she knows she can’t beat yet.

What Stardom has with Starlight Kid is something special, when the day comes for her to finally beat Mayu Iwatani it will go down as one of the greatest moments in Stardom history. And when she comes back to the babyface side? They’ll have a generational star on their hands. ****1/2

The second Suzu Suzuki arrived in Stardom she set her sights on one person: Giulia. The hatred between Suzuki and Giulia was clear from that day on as Suzuki’s resentment for Giulia bubbled to the surface. From that day on it became a waiting game, when would these two former colleagues go to war. Well, we got our answer when the 5STAR GP blocks were announced.

With a spot in the finals on the line Giulia and Suzuki squared off and it was a sight to behold. Never before have I seen two rivals struggling to hold back tears before the opening lock-up. But Suzuki and Giulia could barely hold back their emotions, knowing that they were about to leave it all in the ring.

And leave it all in the ring they did. This was an amazing match. What’s scary is that they have more in them, that despite the war they put on this time they have another gear left, one that they will definitely explore in the future. The close of the match was so intriguing, both Suzuki and Giulia accepted that the time limit was incoming, at which point Giulia sat back and allowed Suzuki to hit her, again and again, to let it all out. Then, Giulia hugged Suzu as the bell rang, both as a sign of affection and to restrain Suzuki from hitting her further.

The post-match was evidence enough that this feud is far from over, but Giulia and Suzuki made sure to leave every bit of hatred behind them in the ring. Suzu Suzuki isn’t a Stardom roster member, but all signs coming out of this GP are that she’ll be around for the long run. Whether that involves her signing eventually or continuing as a part-timer while representing Prominence remains to be seen. ****3/4

A solid enough match to restart things after the emotional war between Suzuki and Giulia. It was nice to see Sayaka get a win although they could’ve given her a better opponent on the final day to make the most of her desperation to win. ***

This match lasted 44 seconds. And what a glorious 44 seconds it was. Two masters of the flash pinfall made numerous attempts to roll one another up until Kashima got the win. ****

It took until the last day but Koguma really stepped up and reminded us of her quality in this one. She and Hayashishita made for very natural dance partners and this match was quite enjoyable as a result. The finish was so well done with Koguma pulling off a reversal of Hayashishita’s finish to pull off the roll-up win. ***1/2

Post Match: A masked figure made its way down the ramp and into the ring. Utami, not wanting to deal with any nonsense, ripped the mask off to reveal Oedo Tai leader Natsuko Tora. Tora laid out Hayashishita and announced her intentions to make her return from injury soon to have a match with Hayashishita.

This was a pretty good outing from SAKI and Tam. SAKI has had a very consistent output all tournament long and she worked well enough with Tam for this to stand out on such a crowded show. With the win, Nakano staked her spot at the top of the block. ***1/2

Nobody goes to battle like best friends and tag team partners. Maika and Himeka were absolutely relentless right from the opening bell and brutalised one another. Maika’s reinvention as a power-based wrestler in this tournament came in handy as Himeka was more than happy to bounce off of another power wrestler.

The finish is kind of a let down but it was fitting that they destroyed one another to the point that neither woman could get back up. ****1/4

While this wasn’t as good as their match earlier in the year it was a tense closing match to block play. Syuri was alive going into this one and knew a win would put her through to the final, Sera wanted to stop her and avenge her loss earlier in the year. There was a lot of interesting work in this with Syuri pulling off some cool submissions and Sera trying her best to stay alive and hit her impactful offense. Eventually, it was Syuri’s submission work that saw her taste defeat to send Tam Nakano through to the final. ****

Ever since Giulia walked into Stardom in 2019 it’s been a matter of when, not if, she would ascend to the top of the company. It’s been a long wait for Giulia fans but it was all worth it for this show. After going to a time limit draw with her current rival Suzu Suzuki, she had to face her biggest rival Tam Nakano in the final. The last time Nakano and Giulia faced off in singles action the night ended with Giulia losing her Wonder of Stardom Championship and getting her head shaved.

This time around she powered through and pulled out the Northern Lights Bomb for the first time all tournament to defeat Nakano and finally reach the top of the mountain. Giulia winning the tournament was the only choice in my mind, she’s been the main character of Stardom for 3 years now and deserves to have a run at the top of the company. With her former tag team partner Syuri holding the World of Stardom Championship, now is the perfect time for Giulia to take the title at Stardom’s biggest show of the year.

With this win, Stardom has its main event for Stardom Dream Queendom at Sumo Hall. Syuri vs Giulia, a rematch of their excellent match from Stardom World Climax and a clash of two of DDM’s original founders. I have no doubts that Giulia will walk away from Sumo Hall with the red belt in hand. I, for one, am incredibly excited to see what a Giulia world title run looks like as she has enough enemies to fill out a lengthy reign worth of great matches.

As for the match itself, it was a perfect continuation of the Tam Nakano vs Giulia feud. It showcased how much both have improved in the year-plus since their last match and went a long way to reaffirming Giulia’s status as one of the top stars and best wrestlers in Stardom. *****

Every now and again when Stardom lets loose I’m reminded of how special this company is. What’s amazing is this show was fantastic as it happened and at the same time left me incredibly excited for the future of Stardom. Not only did I get to watch some great matches, but I also got to see the continuation of Starlight Kid’s climb through the ranks, Suzu and Giulia’s grudge, and a potential climax to Tam and Giulia’s long-term feud. There’s almost always something to look forward to in Stardom and that’s one of the best things about being a fan, even if shows underwhelm there’s SOMETHING interesting on the horizon.

Stardom putting on shows as good as this is exceptional when you consider all the setbacks they suffered in 2020. Most companies would have crumbled that year when they lost three of their top names (Kagetsu, Arisa Hoshiki, and Hana Kimura). Instead, Stardom were able to kick on and put together one of the most exciting rosters that Joshi wrestling has seen in some time. I’m starting to sound like a broken clock but if you’re not watching Stardom right now you’re missing out on some of the best wrestling in the world, long may it continue.

One thing that deserves mention is that the production of this event was amazing. The Musashino Sports Plaza is an excellent setting for pro wrestling and I’d love to see Stardom come back here for big shows more often, maybe if they’re feeling extra ambitious Day 1 and 2 of the GP could be here next year.