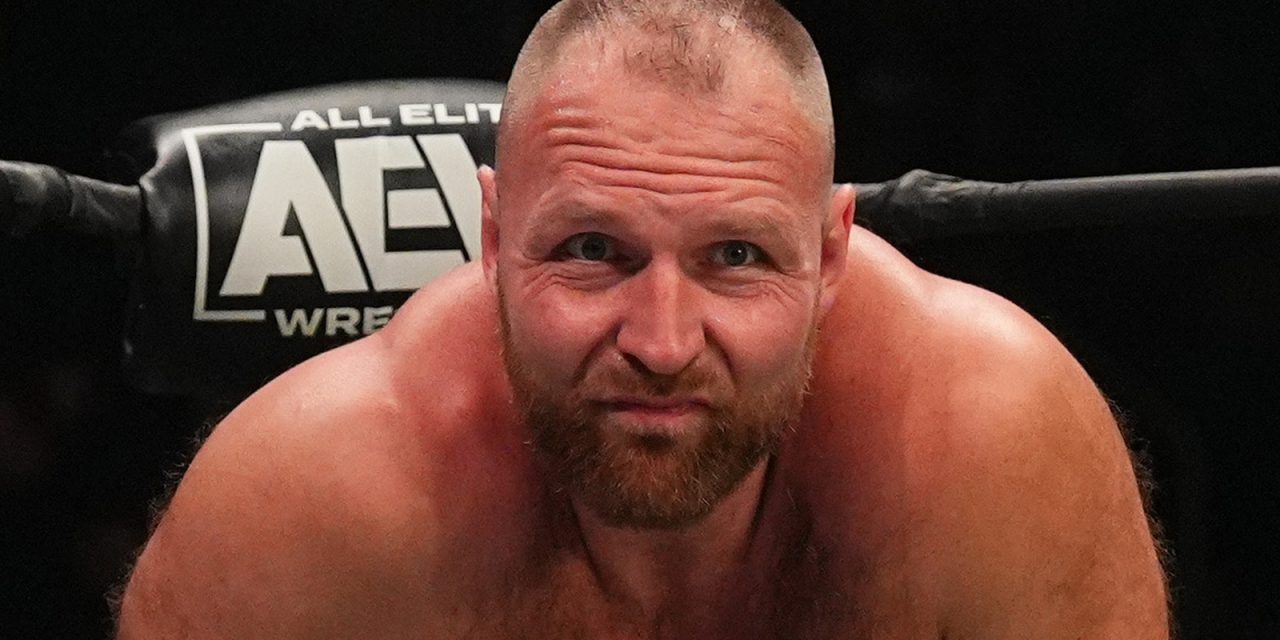 Jon Moxley is not supposed to be here.

I don’t mean that in a “He shouldn’t be alive” kind of way, though having read his outstanding autobiography Mox and seen some of his bloody and violent deathmatches, he’s certainly not someone who’s always played it safe in life.

No, this is a Dante from Clerks scenario. This past Wednesday, Moxley defeated Bryan Danielson in the main event of Dynamite Grand Slam in front of a crowd of 12,000+ at Arthur Ashe Stadium to become a three-time AEW World Champion (four-time if you include this summer’s reign as interim champion). While any wrestler would cherish that as a major highlight of their career, it probably wasn’t what Moxley wanted to be doing that night.

He probably wanted to be enjoying himself on his six-week vacation, hanging out with his wife and infant daughter and going fishing with his buddies. After all, that was what Moxley was supposed to be doing after dropping the AEW World Title to CM Punk at All Out back on Sept. 4. Mox carried the company on his back as interim champion after Punk broke his foot three days after winning the title at Double or Nothing. Now, after losing to Punk and clearing the runway for a Punk-MJF feud for the belt, Mox was ready to take some well-deserved time off.

CM Punk went on a scorched earth tirade at the post-PPV presser against company EVPs Kenny Omega and the Young Bucks, Hangman Adam Page, and Colt Cabana. Afterwards, a fight broke out between Punk & Ace Steel and the EVPs in Punk’s locker room, in which Ace reportedly bit Omega. Tony Khan ended up suspending a bunch of people involved in the fracas, including Punk, the newly crowned AEW Champion. The title was subsequently vacated a few days later.

The events that night lit the wrestling world ablaze. The discourse was inescapable. Questions abounded. Should Punk be fired for going on such a public diatribe against AEW executives? How harsh should The Elite’s punishment be? Was Punk munching on muffins during the presser, or cupcakes? Is Ace Steel secretly angling for a New Japan gig as Takashi Iizuka’s long lost nephew?

And what about Jon Moxley? Well we know the answer to that question. Mox got that phone call from the boss. You know the phone call. “Hey man, I’m sorry, we’re gonna need you to come in, yada yada yada…” We’ve all gotten it. So Mox canceled his vacation plans and showed up on the first Dynamite after All Out, giving a typical, raw, fiery, excellent Jon Moxley promo that doubled as a rallying cry for the promotion. An ace of the company promo. Then he went on to win the Tournament of Champions to become the world champ once again and, well, here we are.

Moxley probably could have told TK to kick rocks and gone on his vacation anyway. “Put the belt on Bryan, I’ll see ya in six weeks,” he could’ve said in his gravelly Mox voice. He could’ve done that, but he didn’t because that is not who Jon Moxley is.

Jon Moxley is the good guy.

That’s true on a kayfabe level because Mox has spent the majority of the past decade as a babyface. Certainly not a white meat babyface — In his book, he compares his AEW character to Jack Reacher, who “kills motherfuckers at a breakneck pace in pretty unforgiving fashion, but it’s always because it’s the right thing to do.” You watch a Jon Moxley match and he will be beating the piss out of some poor soul. Sometimes there are weapons, almost always there is blood, but people are cheering him on regardless.

It’s also true on a literal level because his actual name is Jonathan Good.

But it’s true most of all on a symbolic level because ever since he was a kid, Moxley has lived by the credo of being “the good guy.”

This is a crazy-ass ride I’ve been on for 16 years. But recently now, finally, the whole world makes sense to me. How did I get here? How have I been AEW World Champion for so long? The answer is … my dad. Six-foot-three, 250-pound brick shithouse, would box your ears if you got out of line. Scary. One day he’s in town. He picks me up from the police station but doesn’t hit me. He looks at me and says something I’ll never forget. He says, “Son … we’re the good guys. No matter what happens, no matter what’s going around you, just remember. We’re the good guys.” They tried to lie, cheat, and steal this championship away from me. I’ve been jumped, beat up, I’ve fought monsters, technicians, my own friends … but I always know what to do. I always have. “We’re the good guys.” And now the whole world is bearing down on me, my body feels like hell, I can’t even get out of bed in the morning. I have a pregnant wife at home. I’m holding two titles on two different continents. I have challengers coming from every which way. What do I do? I know what to do. “We’re the good guys.” So tonight, I’m going to walk to the ring. I’m going to sign that contract without any hesitation. I’m going to look into Kenny Omega’s eye, I’m going to shake his hand and let him know in no uncertain terms, “I am the best wrestler in the world.” ​​I am the AEW World Champion. I am my dad’s son. And I am Jon Goddamn Moxley. And that is never gonna change.

Moxley would expand upon what his father meant in his book.

My dad, Danny Burl Good, had meaty hands and a crushing grip that appeared superhuman to me as a child, fortified by baling hay in the humid summers of rural Clermont County in southern Ohio. Built like a human fire hydrant, my dad was an All-Conference football player for Clermont Northeastern high school, at center. Sturdy. Fortified. Dependable. In command. In control of the football. Nothing happens until I snap this ball. When I do, I will gracefully and assuredly pass it between my legs to my teammate, the quarterback, who gets all the attention, praise and chicks, and then and only then … the play will commence. After that, some violent shit might go down. I’ll do what I gotta do to make sure our prom king–quarterback gets to do his thing, and I’ll get down and dirty to block who I need to and clear a path for the star running back, who gets his photos in the paper. Cool, calm, composed. Trustworthy. The bedrock. The center.

That’s my dad. “We’re the good guys” is my moral compass, the words that guide me to determine which path I take. When we sat in that car and my dad said the words that would be forever etched into my brain, he wasn’t trying to philosophize, wax poetic or tell me some groundbreaking new idea I’d never heard before. It was simple. Common sense really. I was into some bad shit, hanging around other kids my age doing stupid things, but that wasn’t who I was. He knew it. He knew I knew it. The message of “We’re the good guys” is simple: If your life was a movie, are you doing things the bad guys in the movie are doing or things the good guys are doing? In film, it’s usually easy to tell the difference: You know who the protagonist is, you know who the antagonist is. You don’t have to be told. Now I’m not saying after this exact moment I never did anything stupid ever again. I went on to commit many stupid, regrettable and embarrassing offenses and probably will go on to commit more in the future. But as I get older, more experienced, collect more scars and become more grateful to God and the universe for my abundance of good fortune, I always come back to this simple philosophy: “We’re the good guys.”

We’re the good guys. It’s a philosophy that Mox has lived up to time and time again in recent years.

In 2016, when Mox was WWE Champion as Dean Ambrose, he pulled double duty on two separate house show loops because Roman Reigns got suspended for a wellness policy violation and someone had to take his spot. In 2020, during Mox’s first reign as AEW Champion, he carried the promotion through the darkest days of the COVID-19 pandemic when there were no fans allowed in attendance and the future of the company seemed uncertain. This past June, Moxley stepped into the main event of Forbidden Door against Hiroshi Tanahashi following Punk’s foot injury and assumed the role of interim AEW Champion in the process, defending the title on multiple occasions. And now, just a few weeks after losing the belt to Punk at All Out, Moxley finds himself with the title in his possession once again, retaking his place at the top of the mountain thanks to the recent backstage tumult between Punk and The Elite.

Jon Moxley has answered the call when called upon. He’s been unselfish in selfish times, to borrow a phrase from Paul Heyman in the classic wrestling documentary Beyond the Mat. Not because it’s fun, not because it’s easy, but because it’s right. That’s what makes Mox so admirable. When things seem weird or bleak or, in this case, when other people’s personal problems are affecting the on-screen product, you can always rely on him to cut a killer promo, have a kickass match, or just brawl around the arena to make the crowd go nuts. He’s the bedrock. He’s the center. He’s trustworthy.

And honestly, when other wrestlers are exploding on company executives at press conferences, allegedly leaking stuff to wrestling media, and getting into fights backstage, someone has to be the responsible adult in the room; it might as well be the guy who loves rolling around in barbed wire and getting skewers jammed into his head.

Is Mox pissed off that he has to miss his vacation? Going by what his friends have said, absolutely. I know I would be. But when the lights are on and the cameras are rolling, he’s gonna step up, take charge, and give it 100% no matter what. Because that’s what the good guys do.

And Jon Moxley is still the good guy. 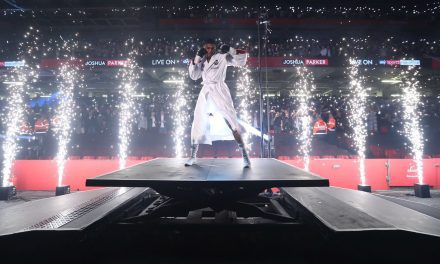 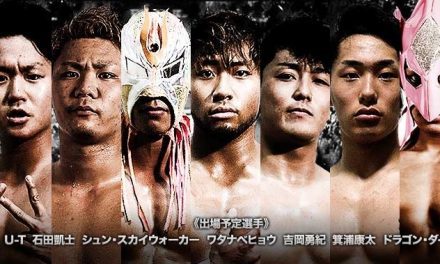