Victory Road feels a bit of an odd show, one I’m not entirely sure why Impact have booked. Given that it’s just two weeks before Bound for Glory, one of their biggest shows of the year, they are understandably not burning off anything too meaningful here. However, that means it feels decidedly like a New Japan Road To show towards the end of a tour – all the matches are obviously building to something but nothing is going to knock your socks off.

I’ve previously described these Impact specials as the 2022 equivalent of the black & gold era NXT Takeovers – the safest bets in wrestling. I’m not sure how high Victory Road will peak given what I’ve said above but I’m sure it’ll be decent at a minimum.

At the time of writing, there are only eight matches advertised for the main show and none for the pre-show. They normally go with 10 for these shows, so expect another couple to be added before the opening bell or on the night, with one possibly being Joe Hendry’s return.

Excluding their weird sojourn in AEW, Alex Shelley and Chris Sabin are having fantastic 2022s as both singles wrestlers and as a team. They’ll be challenging Matt Taven and Mike Bennett for the Impact World Tag Team Championships at Bound for Glory but before then they’ll face off with another Honor No More tandem – PCO and Vincent.

Vincent, meanwhile, has been trying to reanimate/refocus PCO following the latter’s repeated issues with Eddie Edwards. It’s not for me, it must be said.

The booking here should be fairly simple, with the Guns keeping their momentum rolling with a win and Vincent taking the fall. I suspect PCO will win the Battle Royal gimmick they normally do at Bound for Glory but that doesn’t make losing here a problem. Prediction: MCMG

It took a long time for Impact to bring Killer Kelly back into the fold, far too long really, but she’s a very welcome addition to the Knockouts division. Since returning to the promotion just over a month ago, Kelly has been working a femme fatale gimmick, running through Tiffany Nieves, Alisha Edwards and Savannah Evans as she’s made a beeline for Tasha Steelz.

This has been a very sensible first proper feud for Kelly, as Steelz has been a great foil and has cache within the promotion as former Knockouts and Knockouts Tag Team Champion. Kelly should pick up the win here to keep her momentum going. Prediction: Killer Kelly

Mickie James returned to Impact earlier this month after a couple of months away, cutting an impassioned promo about her 24-year career that went from TNA giving a young Alexis Laree a break in 2002 to feeling as though WWE had chucked her out with the rubbish when they released her in 2021. James said that she intended to retire after losing to Chelsea Green earlier in the year but after sitting at home decided that she didn’t want that to be her final chapter. Instead, she wanted to embark on what she called her ‘Last Rodeo,’ a campaign for a fifth Knockouts Title reign that would see her work her way back up from the bottom of the division. The catch? Her next loss would be her last and the end of her wrestling career.

James is currently 2-0 in her Rodeo campaign, picking up wins over local talents Raychell Rose and Hyan. After the latter she was called out by Gisele Shaw for a match at Victory Road, with Shaw saying that she wanted to be the one to end James’ career once and for all.

It’s still early days but I think Impact have done a good job with this storyline so far and I think there’s potential for them to make this really special if they get it right and the retirement payoff at the end is a legitimate one. Regardless of how it looks in the end, we’re still in the building phase so James definitely wins here. The match might be a bit awkward though as Shaw can be quite hit and miss. Prediction: Mickie James

Impact decided to not have Josh Alexander defend his World Title on this show in order to make his Bound for Glory main event with Eddie Edwards mean more. Instead at Victory Road, you’ll see the pair face off on opposite sides of a six-man tag match (you see where the New Japan comparisons came from now…).

There is a story here, with Heath wanting to make amends for getting Alexander and Swann disqualified in a recent match with the new Tag Team Champions Matt Taven and Mike Bennett. Add in the fact that Heath has styled himself as the ‘Honor No More Hunter’ and Rich Swann got to the final two of the World Championship No #1 Contendership match last month that Edwards won.

With the Honor No More trio already booked for Bound For Glory and Heath and Swann currently not, they should be going over here. I’d like it to be clean but Maria will probably get involved. Prediction: Honor No More

At Bound for Glory, Jordynne Grace will be defending her Knockouts World title against Masha Slamovich. Before then she’ll be taking on an opponent of Slamovich’s choosing, namely Max The Impaler, in a Pick Your Poison Match.

Max has been a regular in the NWA this year, challenging for their Women’s title during the 74th Anniversary weekend, and has previously appeared in GCW, ROH, Tokyo Joshi Pro and a number of other places.

I’m of the belief that there’s definitely something in Max but their in-ring abilities do have a ceiling and they can be pretty reckless at times. That might mean the match here doesn’t peak as high as some of Grace’s recent efforts but she’ll definitely work hard. Prediction: Jordynne Grace

Intergender Triple Threat Revolver to determine the No #1 Contender for the X-Division Championship
Alex Zayne vs. Trey Miguel vs. Laredo Kid vs. Black Taurus vs. Mia Yim vs. Kenny King vs. Yuya Uemura vs. Frankie Kazarian

Victory Road will bear witness to the second Triple Threat Revolver match in Impact’s history and the first since No Surrender 2021. If you’re not familiar with the rules, here’s a little explainer:

I’ve not got a tremendous feel for the direction Impact will go with this. There are a couple of people that I feel somewhat confident ruling out. One of those is Trey Miguel – while he’s having a great year and has had superb matches with Mike Bailey in the past, he’s felt quite cold of late.

I think Yuya Uemura will definitely challenge for the X-Division title at some point but he’s still very early on his excursion; his time will come.

Mia Yim and Kenny King have had a little feud going on and I think they’re building towards an Intergender match at Bound for Glory between the two, so those two will likely cancel each other out while setting something up for the next show.

That leaves Alex Zayne, Laredo Kid, Black Taurus and Frankie Kazarian. Black Taurus has been winning more recently (and won a five-way on the go-home show) so he seems a potential candidate but I’ll go with Frankie Kazarian. I’m not sure why they’d bring Frankie back again for a match like this unless there was going to be a follow-up and him challenging Mike Bailey at the next PPV would be a pretty cool one. Prediction: Frankie Kazarian

Delirious’ all-time win-loss record in TNA/Impact Wrestling is 0-18. His last match for the promotion was a sub-four minute defeat to Samoa Joe in 2005. The reasons behind him getting a title remain unbeknownst to me but I don’t make the rules, Scott D’Amore does…

Mike Bailey has been embarking on a series of open challenges since winning the X-Division title back in June, with wins over Trey Miguel, Alan Angels, Chris Bey and Mascara Dorada among his eight successful defences. He is getting to the point where he and the reign need something more interesting and meaty to dig into but I’m guessing that comes after this rogue match with Delirious.

Delirious is not someone I’ve ever vibed with from an in-ring standpoint but I am a big Mike Bailey guy and there’s a bit of me that’s perversely interested in seeing what this looks like. No matter how good or not good this is, there won’t be any drama over the winner. Prediction: Mike Bailey

The Victory Road main event is the fifth Barbed Wire Massacre match in Impact Wrestling history and the first to be contested by three participants.

Sami Callihan returned from a broken ankle at Slammiversary, defeating Moose in a Monster’s Ball match. They ran it back two weeks later at Against All Odds, with Moose getting his win back thanks to an assist from Steve Maclin, who had been posing as a cameraman. Since that defeat, Sami has been battling both Maclin and Moose, desperately trying to prove that the pair were in cahoots. Callihan beat Maclin at Emergence, with a subsequent beatdown from Moose and Maclin with barbed wire leading us to this match.

To be honest, this feud has not been for me. It has had the feeling of being a holding pattern as Sami got up to full speed again and they were ready to put him in the main event picture. The ‘reveal’ that Maclin and Moose were in cahoots, meanwhile, felt very low-rent.

The last Barbed Wire Massacre match between Callihan and Eddie Edwards was a bit naff, with the ring setup looking very uninspiring and the match being quite paint by numbers. I hope it looks better this time as Moose and Maclin are both guys that turn it up to 11 in spots like this and will try their best to make it look and feel like a big-time occasion.

To my mind, the best outcome at Victory Road is for Callihan to win and then move on to challenge Josh Alexander after Bound for Glory. That would also set Moose and Maclin up for a big singles match, or allow Moose to take some time off. I can very easily see them putting Maclin over though. Prediction: Sami Callihan 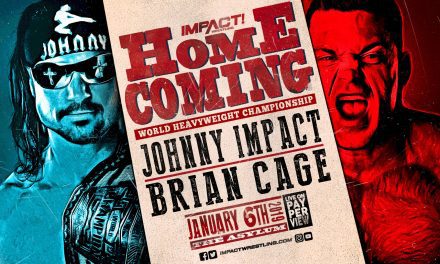