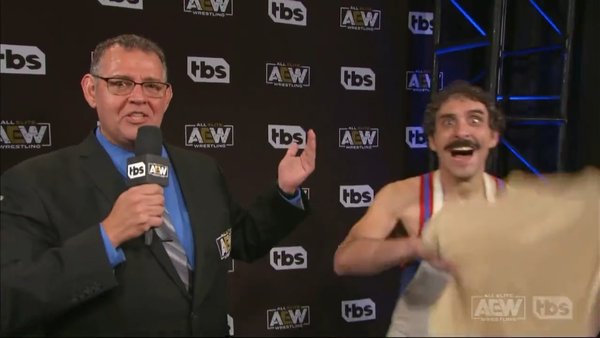 There were two highlights on this show: MJF’s promo & the main event.

It’s the easiest thing in the world to say, but MJF is an amazing promo and he delivered again. I really think the build to the eventual MJF world title match is going really well. It is notable that he spent most of his time talking about Mox and not Danielson; I wonder if there’s going to be a swerve of some kind there or if it’s just AEW doing safe, predictable booking again.

The main event was the best match of the show by a wide margin. Both Chris Jericho and Bryan Danielson are having great years. Jericho has really improved this year and he’s carrying a great load for this company.

Jim Ross not being on Dynamite for the second straight week was a blessing. I worry it won’t last, but I do think the team is better without JR.

These matches weren’t bad, but I found both Moxley-Guevara and Lethal-Jungle Boy matches to be underachieving. Neither was bad but I had higher hopes for both. Jay Lethal seems to need every match to be twenty minutes to really nail the pacing, and Mox & Sammy felt like they were on different pages for most of their match. Maybe part of the opener’s problem was the involvement of Conti & Anna in another match, though they obviously did that to play off of how they directly led to the finish on Rampage’s Guevara vs. Darby Allin match.

I imagine we’re getting a tag title change next week, and I just wrote about how Khan’s booking leaves too many matches on the table, but I was very surprised that Lucha Bros. vs. Swerve in Our Glory was just eight minutes.

Stokely Hathaway’s promo seemed technically good but the crowd – which had been really hot up to that point – just wasn’t having it. The problem seemed like there was too much exposition. Having every member of the stable be a rehab project of some sort doesn’t help.

Also, Stokely really needs to respect W. Morrissey’s personal space. It is not healthy to pressure someone into a hug.

Athena can do some impressive stuff in the ring, but I think she’d have better matches if she only tried about 80% of what she does. This match was below average with several botched spots

Mox-Guevara may have got the most ambitious “this is awesome” chant in wrestling history.

6/10. Not a great show until the main event bailed it out.

Luigi Primo did nothing wrong. Ethan Page hates small business owners and he should feel really bad about himself.

(Bryan Danielson is my “real” pick, but c’mon.)

You can follow Fred on Twitter at @flagrantrasslin. He just launched a podcast with Tyler Forness based on this article series; the first episode is available here.