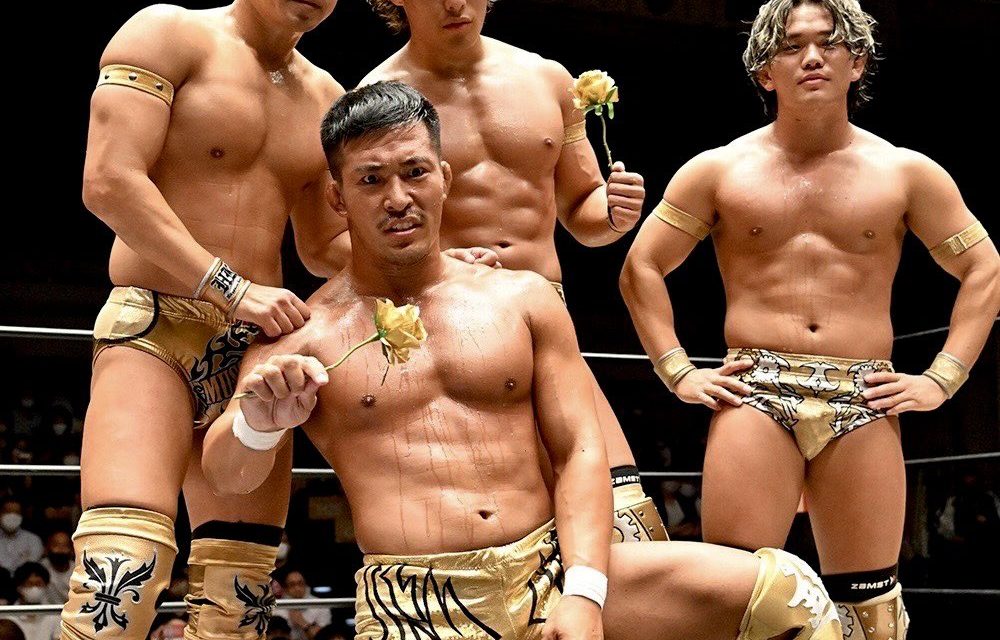 Natural Vibes have become accustomed to two things: first, they are the safest bet to kick off Korakuen Hall shows with a bang. Whether it’s the Young Vibes duo of Jacky “Funky” Kamei & U-T teaming up, Jason Lee and company using their lightning fast speed to bring the energy early on, or the entire squad producing a banger, Natural Vibes is great at being slotted in the first match on these shows. Second, their chemistry with Z-Brats have produced some of the best matches in Dragongate this year. In the same way that Masquerade and R.E.D. stole the show nearly every time out last year, Vibes and Z-Brats have done the same this year.

The interesting thing about this match, however, was the tonal shift from how these two teams were wrestling in the first half of the year. This was far more aggressive and far more intense, based on the sudden fixation Shun Skywalker has with ending Natural Vibes. I love the way these teams have ramped up the hatred since last month when Skywalker made his intentions clear. Everyone pulled their weight because everyone hit hard and contributed to a thrilling opening contest.

It was looking like Kzy had the match won after a forearm shiver to HYO, but KAI distracted the referee during the pinfall, giving Shun Skywalker a chance to brain the perennial underdog with a chair and then plant him with the SSW. This was very good. ***3/4

With Shun Skywalker and SB KENTo abroad for Z-Brats in the coming weeks and Jacky “Funky” Kamei and Jason Lee representing the Kung-Fu Masters at Dangerous Gate, it was decided that an All Out War between the remaining members would take place at Dangerous Gate.

I am all for Ryukyu Dragon Pro inclusion, but I prefer when it is my main man Gurukun Mask stopping by. It’s not that Teelan Shisa was bad, but this match felt endless. There was no reason for it to happen outside of Shisa squareoff and that did nothing for me. This was skippable. **1/4

This wasn’t a ton better. I love when they decide to give Don Fujii something to do, and his recent squabble with M3K has certainly been something to do. The issue is that M3K lacks a big spark when Mochizuki Junior is not involved, and when you factor in Maria and Kanda, it put this match at a severe disadvantage. Nothing about this match was bad, but nothing about it was good, either. Fujii scored the fall over Susumu Mochizuki with a Gedo Clutch. **1/2

Look at the names in this match. Seriously, what an eclectic group of people. Dragon Kid is one of the greatest juniors ever and he’s saddled alongside the always-fun Ho Ho Lun and the rarely enjoyable Problem Dragon. On the other side, you have a rookie, the Forever Rookie, and a man who used to smash pineapples for fun. This is one of the more peculiar Dragongate lineups in history.

The important thing to note here is that Ho Ho scored the fall, and not only is that fun because it’s his first ever win in this building, but it goes to my theory that we are about to enter a universe where the Kung-Fu Masters are spreading their message all over Japan. I think Natural Vibes’ days are numbered and that once they fold, Jason Lee and Jacky “Funky” Kamei will make the leap to doing kung-fu full time. To do that, you need to make Ho Ho matter. Is scoring a fall over Punch Tominaga a giant deal? Not quite. I think they’d let me beat Punch. But, it shows a level of faith in Ho Ho that is needed to make this act work across the country. **3/4

This was Kaito Nagano’s Tokyo debut.

The scrappy, Fukuoka-born 20-year-old debuted in his home prefecture on August 21 in a thrilling bout against KAI. Nagano is undersized, even for this roster, and throws a vicious dropkick. Actually, that’s just about all he does. Nagano has established that he can indeed throw a dropkick. Luckily, he’s established that he can also take a beating. This was short and brutal, ending in just over two minutes with Hulk using the Cobra Clutch for the victory. ***

After months of speculation, Ben-K has finally turned on High-End.

Ben has been at odds with his leader, YAMATO, all summer. Over this time, it’s become clear that not only is Ben’s partnership with YAMATO not long for this world, but High-End as a whole is not built for the future.

I truly loved the way they went about this. The match itself was solid enough. Minorita took a beating, Gold Glass eventually fought back to make it a relatively even melee, and then Ben disappeared. YAMATO and Kagetora were left fighting by themselves, which they did rather successfully. YAMATO was moments away from choking Minorita out with his patented sleeper hold when Ben-K came from the back in new gear – gold gear – and speared YAMATO before throwing Minorita on the five-time Dream Gate Champion so that he could get the win.

This is the most focus Ben has had since he won the top prize in the company three years ago. His recent aggression has been exactly what he needed. It’s not that he was in a slump, but he was a human who was not being pushed to meet any expectations. He existed in this upper midcard void that was doing him no favors. This is what Ben needs right now, and whatever comes of Gold Class, who have been limping in a post-Kaito Ishida world, will be decided later.

In one of the single coolest matches of 2022, Ishin Iihashi scored the first victory of his career, 352 days after his debut.

This was a battle of father & sons. Obviously, the Mochizuki tandem speak for themselves. Masaaki is one of the greatest wrestlers ever and Junior is a dynamic rookie who is improving at a scary rate. Ishin Iihashi, who debuted alongside his brother last year as Japan’s first supernovas (both mother and father were pro wrestlers), has been quietly great in his first year behind the headline-grabbing Takuma Fujiwara and Mochizuki Junior. His father, the sleazy, grimy WAR standout, hadn’t wrestled a match since 2019. He hadn’t wrestled a full time schedule in a decade. Yet, on this night, Ishinriki held his own against the otherworldly talent he shared the ring with.

A buddy of Ultimo Dragon behind the scenes, Ishinriki was a huge question mark in terms of what he was going to be able to bring to the ring on this show. He brought his legendary sumo slaps, which peppered the chests of both Mochizuki’s. While he was clearly a step slower than the people he shared a ring with, at no point did Ishinriki hinder this match. This was the best version of this match. The rookies crushed it, Mochizuki (the father) was terrific, and Ishinriki held up his end of the bargain.

Of course, the finish needs to be discussed as Ishin trapped Masaaki Mochizuki in a Russian Leg Sweep flash pin and held him down just long enough to steal the win. Ishin has taken a ton of abuse over the last year. He’s been beaten thoroughly and consistently. He seemed ready for a win months ago, but I loved how he was able to stay interesting while still losing. I don’t expect him to morph into Goldberg and rattle off 100 consecutive wins after this, but I do believe he has the talent to slowly ascend up the card. ***1/2

A Triangle Gate match was set up after the match. M3K wanted Ishin Iihashi, Ishinriki, and Ishin’s mother, former joshi wrestler Utako Hozumi to challenge for the titles. Hozumi claimed that she was far too old, but that she had a suitable replacement. Out came Ishin’s “aunt”, who was Don Fujii in drag. This will be a hit with some people, but I really wanted to see Don Fujii wrestle M3K and no part of that included Don Fujii wearing a dress. Hopefully that doesn’t bog down what could be an excellent match.

This match caused me physical pain.

We nearly got the Eita that I’ve been missing, the Eita that has been gone for years and years now. Despite the fact that his biggest successes have come as a sleazeball heel hidden by sunglasses, I prefer Eita as a plucky, llave-loving junior who can beat anyone with his technique. We were so close to that. The closing stretch with him and current Dream Gate Champion Yuki Yoshioka was phenomenal and gave me the hope that I needed in regards to their upcoming title match. That match is going to deliver if we get This Eita. He barely got his knees up on a Yoshioka frog splash (which Yoshioka sold beautifully), and then nearly tore his arm off with the Imperial Uno. There was a viciousness to this submission that hasn’t been seen since he was trying to remove Akira Tozawa’s limbs in 2014. He tapped the champion and made his presence felt.

By no means was this match lacking prior to the finishing stretch, either. I spoke about Madoka Kikuta last month on Open the Voice Gate and noted that he had been presented with a golden opportunity by joining D’Courage as their assistant. Kikuta had struggled finding his footing since returning from his year-long injury absence. As the third wheel in what has become a dynamic trio, Kikuta has been terrific. He is wrestling with energy and life in a way that had been absent in the middle months of the year. Although he’s not an official member of D’Courage, Kikuta is wrestling with the fire, passion, and precision that Dia and Yoshioka routinely bring to the ring. It has been great to see.

This was a beautiful, mind-off match. This was, to so many generations, what Dragongate is. Hot guys did big moves in a trios match and the end result was something legitimately great. Go watch this match. ****1/4

Storm Gate 2022 blew by. This was not Dragongate’s best output of the year, but it’s hard not to get excited when the main event delivers the way that it does. This is a show that you can parse through rather easily. Check out the opener, then skip your way to the Ben-K turn and the final two matches. There’s no need to dilly-dally with the undercard. The business end of the show is what matters.