Bianca Belair vs. Becky Lynch & The Art of Long-Term Storytelling 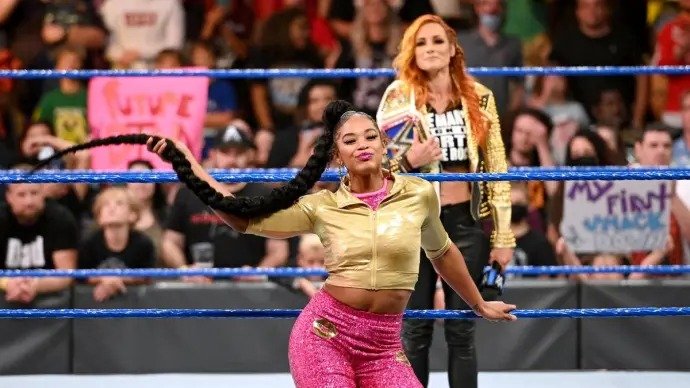 The last decade of WWE’s main roster programming has been short on long-term storytelling. Few programs from this era featured a satisfying beginning, middle, and end.

But every once in a while, a program comes along that hits on all the right notes, like Bianca Belair vs. Becky Lynch. Their year-long program included every element of what makes a great professional wrestling rivalry: captivating performers, signature moments, and excellent matches.

But to understand what made this feud so memorable, we must first travel back to where it all started.

WWE SummerSlam 2021 was supposed to be a continuation of Belair’s run atop the SmackDown women’s division. Only four months earlier, she captured the SmackDown women’s championship by defeating Sasha Banks in the main event of WrestleMania 37 Night 1. It was the first time in history that two people of color headlined on the grandest stage of them all and only the second time in history that women headlined WrestleMania since the Becky Lynch vs. Charlotte Flair vs. Ronda Rousey triple threat match at WrestleMania 35.

Bianca’s next challenger was multiple-time women’s champion Bayley, who she defeated in two very strong matches at WrestleMania Backlash and Hell in a Cell. Their program ended abruptly when Bayley suffered a torn ACL that would put her on the shelf for the remainder of the year. Defeating two of the famed “Four Horsewomen” in such a short period of time was proof that the company was firmly behind Belair as being the face of the SmackDown women’s division. 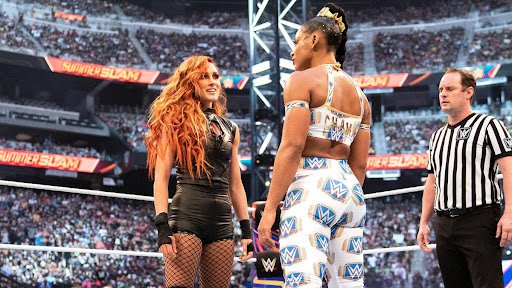 It wasn’t long before Sasha Banks returned to avenge her WrestleMania loss to Belair. A Sasha vs. Belair rematch was the original plan for SummerSlam until Banks was pulled due to injury. Instead, we got the ever-reliable Carmella as her replacement.

But before they could lockup, Becky Lynch made her surprise return after being out of action for the previous year on maternity leave. She laid out Carmella and shockingly pinned Bianca in 26 seconds to end her four-month championship reign.

Fans and fellow wrestlers alike were perplexed by the company’s decision to have a returning, established act pin one of their biggest up-and-coming stars in such an embarrassing manner.

The aftermath of SummerSlam saw Lynch transform from a rebellious babyface into a cocky heel. Her shift in attitude was reflected in her increasingly erratic fashion sense, which morphed into a cross between Elton John and Lady Gaga. Whereas Lynch was previously known as the “The Man,” she now took on the moniker of “Big Time Becks.”

Despite the embarrassing loss, fans remained sympathetic toward Belair because she never made excuses. Bianca admitted that Becky got the best of her, but assured it would be a different outcome the next time they met. 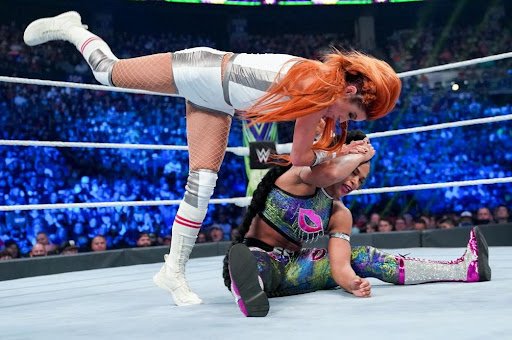 Belair got her rematch at Night of Champions, but her plans were thwarted by the returning Sasha Banks, who laid waste to both ladies. This led to a triple threat match at Crown Jewel where Lynch retained.

Both Lynch and Belair eventually went in separate directions, however, they both ended up on the RAW brand as a result of the annual Superstar Shakeup.

Time To Run It Back

As Lynch was busy defending her title against all comers, Belair steadily climbed back into title contention.

Two programs of note for Lynch during this period involved Charlotte Flair and Liv Morgan. Charlotte and Lynch were certainly no strangers to each other, but their feud leading into the Survivor Series became particularly heated in the aftermath of a controversial title swap segment on SmackDown that caused tempers to legitimately flare backstage.

Becky’s feud with Liv was noteworthy as it was the first time Morgan was positioned in a top spot. While Morgan would eventually capture the SmackDown women’s title months later at Money in the Bank, her brief program with Lynch really opened people’s eyes to accepting her as a top star. Following her program with Morgan, Lynch occupied her time with Doudrop and Lita.

Now back to Bianca Belair.

Although Bianca was no longer in the title picture, she still continued racking up big wins, including being the sole survivor of the RAW women’s team at Survivor Series.

In February, Belair outlasted five other women in the Elimination Chamber to punch her ticket to a rematch with Becky at WrestleMania. There was definitely a big-time feel to this match as Belair was far and away the most formidable challenger to dethrone Lynch. The intensity went up a notch when Bianca cut Becky’s hair on the go-home show leading up to WrestleMania.

The EST Is Back On Top

There was a feeling going into WrestleMania that Becky vs. Bianca would be one of the better matches on the show, but these two ladies went in with the mentality of having the best match on the show, period. From the opening bell to the finish these two put on a clinic that kept fans on the edge of their seats. Over two nights of action that featured Brock Lesnar vs. Roman Reigns, AJ Styles vs. Edge, Charlotte Flair vs. Ronda Rousey and Steve Austin’s first match in 19 years, it was Becky vs. Bianca that stole the show. 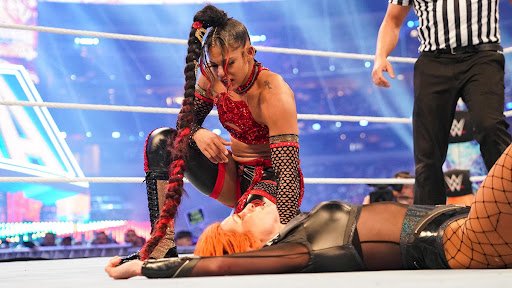 Return Of An Empress; Becky’s Paranoia

With Belair back on top, Lynch went into paranoia mode. On the RAW after WrestleMania, Lynch proclaimed that she would start her redemption journey toward regaining the RAW Women’s championship. However, there was a major problem standing in her way.

Asuka returned from a several month sabbatical to challenge Becky. There was no shortage of history between the two as they previously met at the 2019 and 2020 Royal Rumble. Asuka was the one who Lynch personally handed her RAW women’s championship to before going on maternity leave. Asuka’s return was a welcome change and proved to be a credible threat to Becky and Bianca. The three had an outstanding triple threat match at Hell in a Cell, where Bianca emerged victorious. 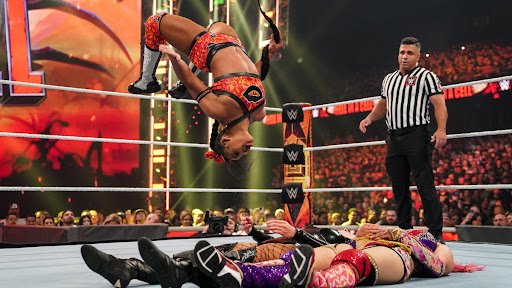 It was around this time that Lynch’s persona became more unhinged. The storyline was that “Big Time Becks” had been on top for so long that she couldn’t handle not being the center of attention. Lynch’s unpredictability made her one of the most entertaining parts of RAW during this period. One week she would show up backstage wearing a Seinfeld-inspired shirt. The next week she would be fighting for the 24/7 championship. You never quite knew what you were going to get from her.

Asuka’s inclusion was smart as it helped prolong the eventual Becky Lynch vs. Bianca Belair clash at SummerSlam. The stakes for their rematch couldn’t have been higher. It felt like both ladies were trying to complete their own redemption story–with Lynch looking to reestablish her dominance and Belair looking to avenge her 26 second loss from the prior year.

It was time to bring things full circle.

Ending On A High Note

The time for SummerSlam had come and these two had the responsibility of kicking off the show. For two ladies who produced the best match at WrestleMania a few months earlier, they had no problem tearing down the house again. Belair surprisingly won clean. This encounter may have been their most impressive to date as Lynch dislocated her shoulder early on and still went on to complete the rest of the match in tremendous pain.

Another thing that stood out about this match is how well they mesh together. Every wrestler needs a dancing partner that brings out the best in them. Think about Ric Flair vs. Ricky Steamboat, Steve Austin vs. The Rock and The Briscoes vs. FTR.

You can now add the combination of Becky Lynch vs. Bianca Belair to this list.

They produce magic whenever they lock up.

When you take into account the totality of Belair’s major accomplishments—pining Sasha Banks in the main event at WrestleMania, pinning both Bayley and Becky Lynch two times each on PPV, being a two-time women’s champion and 2021 Royal Rumble winner—she easily ranks among the most impactful women in modern WWE history. While Belair has been great for some time, the program with Lynch made her career. Belair is now the biggest star across the women’s division and can be counted on to deliver the goods against any opponent.

For her work, Lynch once again proved why she belongs near the top of any list of the greatest women wrestlers of all time. Few wrestlers today possess the total package of charisma, wrestling ability, promo delivery, and star power she brings to the table. More important, Lynch was willing to do whatever it took to elevate Belair to her level, and the result was magic.

The conclusion of their SummerSlam encounter started yet another chapter in their story.

Afterwards, Lynch and Belair shook hands and shared a warm embrace thereby signifying the end of their program and an official babyface turn for Becky. They were then greeted by the returning trio of Bayley, Dakota Kai, and Io Sky.

But the following episode of RAW brought an official end to the story they spent the last year writing.

Lynch addressed the crowd with her arm in a sling, selling her legit injury from SummerSlam. Instead of coming out in some fancy threads, she was clad in a simple black leather outfit. Her usual bravado was replaced with a humbler tone. “Big Time Becks” was gone. “The Man” was back.

What occurred next was the single best payoff to a WWE storyline in ages, with each woman giving the other their due respect.

Once Lynch returns from injury, I believe these two will continue writing some of the best chapters in their story yet, as allies. 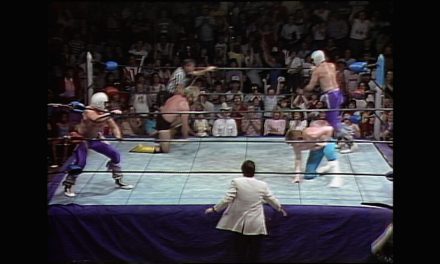 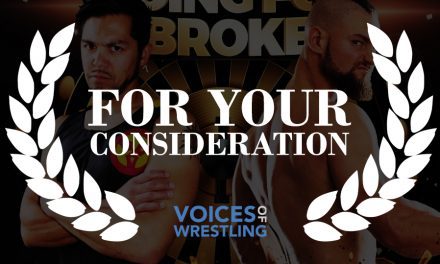