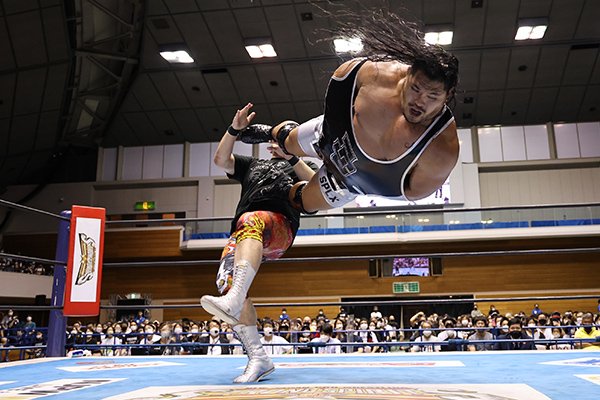 Here we are on night 16 of the G1 Climax, and we are inching closer to chaos in the D Block by having all of them tied. Also on this night, Cobb is trying to get some advantage in the A Block, Jay White is wrestling Taichi to try to get some more advantage over Tama Tonga, and we have KENTA wrestling Henare to get some momentum for his match against Tanahashi tomorrow.

Let’s go to the undercard:

The two men are mathematically eliminated, yet this is for pride and for KENTA to get some momentum for his match against Tanahashi tomorrow. I think that KENTA is going to spoil Tanahashi and leave the C Block decision in a winner-take-all match of Naito vs Sabre Jr. on Tuesday. From the results of this match, it seems that my prediction is coming to fruition.

This match is a hard hitting affair between both men, low on bullshit. The match started with a hard hitting kick sequence, but KENTA eventually got the better of it and started dominating the match. It was back and forth, and it ended when Henare went for the Ultima and KENTA blocked it by body scissoring the referee. Just like in his last match, Henare got distracted by fighting with the referee, which gave KENTA the opportunity to go for the GTS, which was blocked, and then KENTA was able to apply the Game Over to submit him. A nice ***¼ match, two professionals doing what they do best.

This all started with Jeff Cobb imitating Yano’s entrance, going into the ring with a jacket, a DVD, and even a written down introduction which is similar to Yano’s. Then Yano’s music hit, and he was not coming out, which prompts Cobb to tell the referee to start counting to 20 to eliminate his opponent. Then Yano came through the crowd and started attacking Cobb! This sequence lasted a bit long, but the rest of the match was the usual wacky hijinks.

This time Yano tied up Cobb by putting his arms inside his singlet, and Cobb could not get them out, which created even more hijinks. Cobb won with a Tour of the Island after being released from his singlet prison. **, not worth watching unless you want to see Cobb jump a la Orange Cassidy with his arms in his singlet.

Did Shingo do the impossible and make a Yujiro match interesting? Kinda, for like half the match. Shingo did a really great job of making this as interesting as can be by countering everything they threw at him and pumping up the crowd. A lot. I think he spent a portion of the match just trying to get people into watching this. Eventually Yujiro had to get some control of the match and I lost interest.

Then one of the coolest things happened. When I was wondering how long this would last and when SHO and Yujiro did all of the usual tricks (chair shot, wrench, distraction, taking out the referee), Yujiro went for one more chairshot and Shingo punched the chair and it hit Yujiro straight in the face. That image was satisfying and made me laugh. Shingo then went for a Pumping Bomber and Last of the Dragon to finish this off and keep the all-ties chaos alive in the D Block. ***

This is easily the match of the night, and another feather in YOSHI-HASHI’s cap on his way to becoming one of the most consistent wrestlers in the G1. Since 2020, he has been one of my favorite guys in the tournament, always having at minimum a good match. He is here with Ospreay, who was great, as he always is.

Ospreay started the match working nonstop on YOSHI’s heavily taped shoulder, but YOSHI countered back with chops and a kick to Ospreay’s head when he went for an Oscutter. The match went into a great back and forth oneupmanship, and I have to admit that I thought at two moments that YOSHI was going to take the win, especially considering how wacky the D Block is. But alas, the Karma, Kumagoroshi, and Destroyer were not enough to take down Ospreay, who finished the match with a Chelsey Grin and Hidden Blade. A really good match, but not something to go out of your way to see. ***¾

Jay White is still undefeated in the G1 and is two points away from his only competition in the B Block, Tama Tonga. They are wrestling next Tuesday in a winner-take-all match. As far as tonight’s match goes, it was decent, nothing much to write home about.

The match started with Taichi trying to do his sumo gimmick, but White just kicked him and started working on his throat and dominating him. When Taichi was getting his wind back and was working on him, Gedo distracted him by getting hold of Miho Abe. This angered the man, who punched White straight in the face and went out to follow Gedo. Gedo ran back into the ring, and Taichi clotheslined both Gedo and White to hell. There was a close call when Taichi did the Last Ride powerbomb for a two count, but White was able to hit the Blade Runner. He took too much time to pin him, so instead he went for a second one to get two more points. A good main event, nothing special. ***½

After four really good G1 shows in a row, night 16 is just underwhelming. This is not Night 3 bad, but just a show that had three nice matches and two forgettable ones. If you want to watch something from this night, just go with the last two matches. 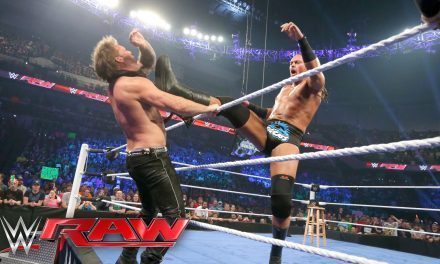