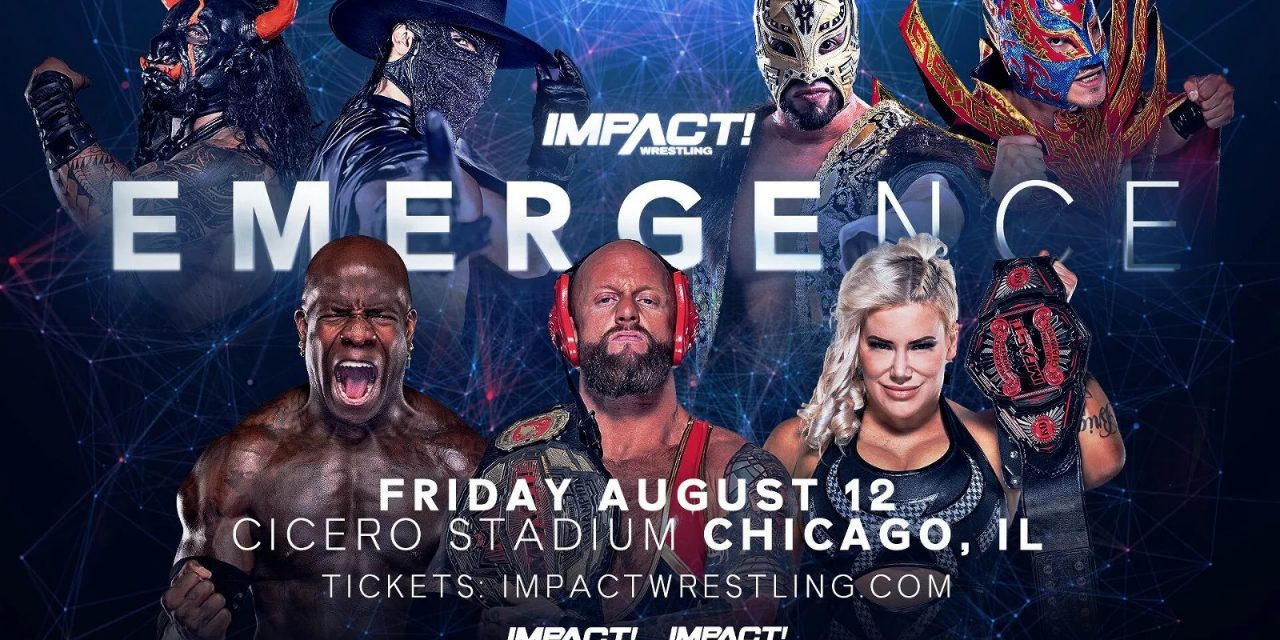 While the Digital Media title still doesn’t do it for me, Brian Myers had one of his best matches in Impact when he won it from Rich Swann and his character has been great in the weeks since.

The build here has been pretty simple. Gujjar felt his undefeated singles record warranted him getting a shot against Myers, who then found various ways to avoid giving it to him. First, Myers told him he’d need to win an unofficial top contender’s match with Johhny Swinger. When Gujjar won that, Myers pushed him to take on Vincent while facing off with Black Taurus himself instead. Although Myers beat Black Taurus, Gujjar got one over on the champion by working with Decay to put him down with the Gargoyle Spear, leading to him finally getting the shot here.

Gujjar is someone that Impact management are clearly very high on but, as you’d expect for someone with less than 30 career matches under their belt, he’s still quite green and needs some seasoning. I don’t think he wins here, but I think they want him to have a longer match on a bigger show with a steady hand like Myers to see what he’s capable of. Prediction: Brian Myers

Having beaten Mickie James and Mia Yim at Against All Odds, the VXT (pronounced vexxed) tandem of Purrazzo and Green then defeated Jordynne Grace and Yim on Impact. Although they both wanted to be involved in Grace and Yim’s Knockouts Title match, Gail Kim said that their impressive form in tag competition merited a shot here against Rosemary and Taya Valkyrie, who’ll be making the second defence of the titles they won at Slammiversary.

I have to say, I’ve quite liked VXT since Impact put Purrazzo and Green together. Purrazzo is obviously very good, the tag scene is a more appropriate use of Green than sticking her in the Knockouts title picture, and I feel that they work well as a heel pairing. They’re also the infinitely more interesting team to hold the titles coming out of this show as Rosemary and Taya have spent most of the build tied up with Havok’s personality change since visiting the Undead Realm. Don’t ask. Prediction: VXT

KUSHIDA has been fun since arriving in Impact, having a great main event with Rich Swann a couple of weeks ago before linking up with old friends Alex Shelley and Chris Sabin to fend off the attacks of Violent By Design. With Shelley tied up in the main event, KUSHIDA and Sabin team up to take on the underrated duo of Deaner and Joe Doering.

This feud between the Motor City Time Splitters and Violent By Design has been fun and it’s set to continue beyond this match with a six-man tag team match announced for the tapings the following day. There’s definitely going to be an angle in one or both of these matches and while I’m not ruling out an Alex Shelley turn in that six-man, the seemingly more obvious route at the moment is Violent By Design getting the win here with some Young assistance to tee up a decisive babyface win in the later meeting. Prediction: Deaner and Joe Doering

This is a AAA attraction match involving two Impact Wrestling debutants – Bandido, who was reported to be in contract negotiations with the promotion last month, and Rey Horus.

These two have faced off a number of times in singles matches before and given what they’re both capable of, I suspect this will be very good and one of the stronger matches on the show. Bandido is the obvious pick to go over, with the former ROH World Champion likely to be an immediate addition to the top end of the Impact roster moving forward. Prediction: Bandido

Back at Against All Odds, Sami Callihan seemed poised to beat Moose for a second time in almost as many weeks in the Clockwork Orange House of Fun match. That was until Maclin, who’d previously been posing as a cameraman, hit the ring to low blow Callihan and leave him prone to a Moose spear and a first defeat following his return from injury. Since then, Moose and Maclin have gone out of their way to deny having any form of alliance but they’ve both repeatedly gone after Callihan.

The medium-term direction for Sami at the moment seems to be a third match with Moose before moving towards Josh Alexander and the World title. In order to get there he needs to beat Maclin. While I could definitely see them extending the feud by giving Maclin a distraction win here, I think that Callihan goes over. Prediction: Sami Callihan

As noted in one of my recent columns, I’ve thoroughly enjoyed Impact’s presentation of Honor No More this year. They’ve come across as a proper outlaw group, confined to the shadows of the Impact Zone. They’ve not been this overbearing dominant faction either, just one capable of beating anyone on their day but on any given day capable of losing to anyone.

Emergence, however, could be their last stand. If they lose to the Bullet Club, they will have to disband. If they win though, Matt Taven and Mike Bennett finally get a World Tag Team Championship match against The Good Brothers.

As much as Honor No More winning feels like the direction Impact should and will go in, there are two stories at play that make the Bullet Club winning a realistic possibility. The first is the ongoing tensions between Eddie Edwards and PCO, which could come to a head here and cost their side. The second is Heath’s ‘Honor No More Hunter’ gimmick; surely a good payoff to that storyline is him, or even the threat of him, costing them their entire existence as a group.

However, even with those in mind, the fact the Good Brothers are in theory working their way to the exit door makes Honor No More winning and Taven and Bennett getting their title shot at the next monthly special seem the most logical outcome. Eddie and PCO’s beef and the troubles with Heath can then rumble on and get their payoffs later in the year. And, hey, why else would big Hikuleo come in unless they wanted him as the pin-eater? Prediction: Honor No More

Jack Evans was supposed to be part of the Ultimate X match at Slammiversary but got injured and was replaced at late-notice by Andrew Everett. He gets that title shot here instead as Mike Bailey looks to make his sixth defense of the X Division title.

I like the booking of this match. It was something I hoped Impact would do and I think it’s a nice way to both honour the original booking and give Bailey a fresh look as champion without burning off matches with the rest of the roster.

Evans is a very solid hand and he’s made all the right noises about being motivated since leaving AEW earlier in the year. I doubt the match will peak as high as some of Bailey’s others but it should still be another solid defense to add to his impressive portfolio of matches this year. Prediction: Mike Bailey

Jordynne Grace makes the third defence of the Knockouts title she won at Slammiversary against Mia Yim, who beat Deonna Purrazzo in a No #1 Contender’s match just after Against All Odds.

The build to this match has been mostly all about friendly competition, with the pair showing a lot of mutual respect for each other and there being a lot of hand shakes and so on. There was a bit more edge on the go-home show, with Yim making a dig about Grace having the shortest Knockouts tag title reign in history.

I get the feeling though that this show might be one where we see the beginnings of the long suspected Grace heel turn. I doubt that this will be the end of the issues between these two or that they’ll cut the legs off Jordynne’s title reign so soon, so I wonder whether she wins in an underhanded way before they spin into something a bit different with the tag rematch that’s booked for the tapings with VXT. Prediction: Jordynne Grace

This is, without a shadow of a doubt, my most anticipated match on the entire card and a thoroughbred MOTY contender on paper.

After teaming up with Alexander to defeat Violent By Design, Alex Shelley and Chris Sabin then squared off in their first singles match in 12 years to determine the next challenger for the World Championship. The battle between the Motor City Machine Guns teammates was stellar, transporting this sentimental dork back to 2009 when I first discovered TNA/Impact. With victory, Shelley earned his first-ever World Championship match in the promotion, a fact that seems crazy.

Although I think contract signings are among the worst segments in modern wrestling, the promo material exchanged between these two hints towards how I think the match will play out. Shelley continued to show the grizzled, heel veteran character that he’s exhibited on the indies for a while now and showed in Impact in patches, while Alexander seemed a little in awe and a little too respectful of the man coming after his title.

While I think they’re both usually outstanding anyway, I think these two match up well stylistically and should produce a classic ‘main event’-style match. When it’s all said and done, though, Shelley still won’t have won the big one. Prediction: Josh Alexander 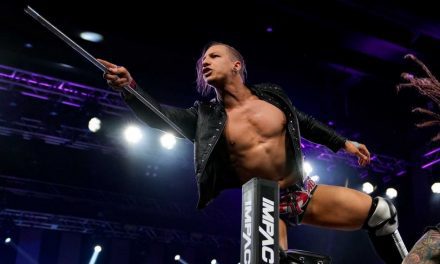