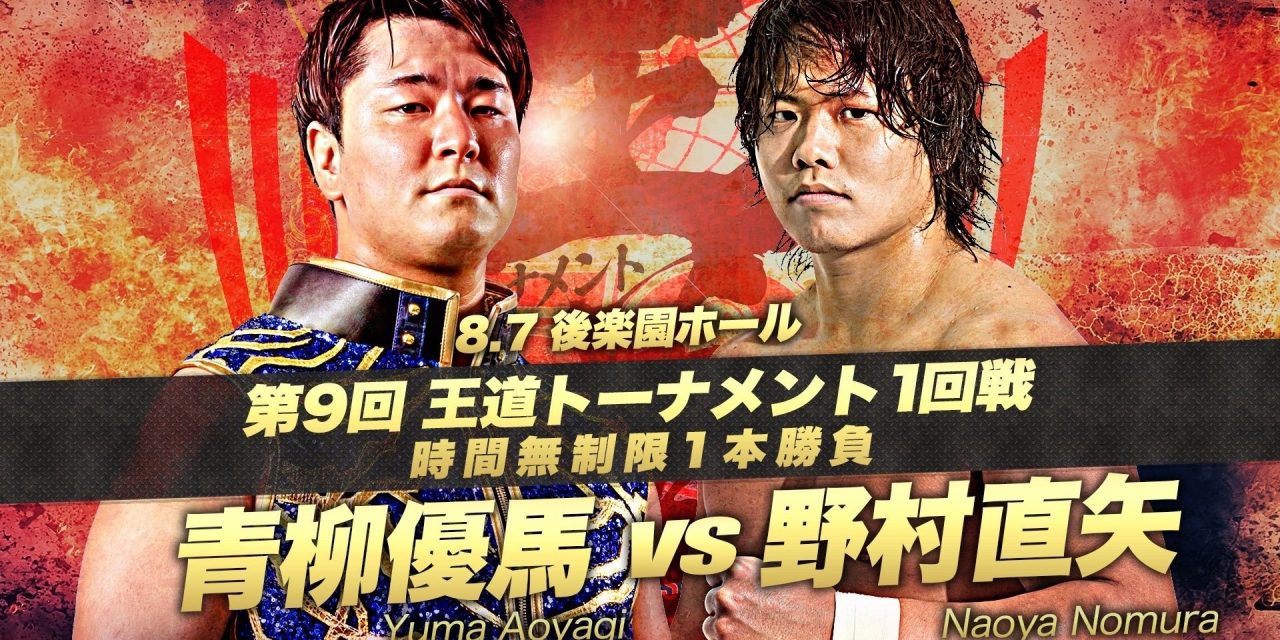 Between these matches and the tournament ones, All Japan made a number of announcements. First, Minoru Suzuki and Yuji Nagata will be working the September 15 show at Hodogaya Public Hall in Yokohama. That show will also feature Kento Miyahara & Tiger Mask vs. Suwama & Black Tiger (don’t ask me who this Black Tiger is, I think it’s the one that has teamed with Tatsuhito Takaiwa lately).

Christopher Daniels and Joe Doering will be at the 50th anniversary show on September 18 at the Nippon Budokan. So that’s AEW and Impact representation on the show. The much hyped rookie Yuma Anzai will debut. The Saito Brothers, Jun and Rei, will also return at the show from their excursion to the US and Europe. Yuji Nagata and Minoru Suzuki and Tiger Mask will also be at the Budokan. Daniels, Doering, Nagata, Suzuki and Tiger Mask will also work the September 19 Korakuen Hall show.

The only match announced so far for the Budokan is Masanobu Fuchi, Atsushi Onita & Shiro Koshinaka vs. Yoshiaki Yatsu, Masao Inoue & Great Kojika. Kyohei Wada will be the referee and Fumito “Tiger” Kihara the ring announcer. This is billed as the special 50th anniversary match.

Yuma Anzai then came into the ring to say a few words before his impending debut on a big stage.

Ayabe got in some stuff early, but then Lee worked him over. Lee was more heelish here than he has been recently. This was paint-by-number to start but picked up towards the end. Ayabe did a running dropkick off the apron to the outside. Ayabe even got a couple of near falls but Lee came back, hit a running knee to the back of the head then the D4C to get the win.

While Ayabe still has some improving to do, he really did step up here, in the biggest singles match he’s had in All Japan thus far. ***¼

Are you really surprised that this was great? Aoyagi looked like a million bucks here and Nomura gave him a lot. A battle of Aoyagi’s speed and flying vs. Nomura’s strikes and technique. There were some great counters in this with Nomura catching Aoyagi on some flying moves and turning it into a hold. Aoyagi got several big near falls as well. Aoyagi missed a Firebird Splash but kicked out at one from a Nomura PK. Then they traded some flash pins attempts with the crowd getting into it by clap crowd standards. There was also a nasty headbutt from Nomura in here as well. Nomura delivered a big slap to the face and pinned Aoyagi with the Dragon Suplex.

This was tremendous. Nomura was excellent as usual and Aoyagi is ready to be the new Jr. ace. Hopefully that happens at the Budokan. ****

The last time these two wrestled in Nomura’s farewell match in All Japan last December, they wrestled a technical fast-paced style. This was more of a struggle between these two and the hate was palpable. So this wasn’t wrestled in the style you’d think these two would do, but it told a story. Both men wanted to try to get the other to tap out. Aoyagi used Nomura’s finisher the Maximum on him. Nomura then used Aoyagi’s Rockstar Buster in retaliation.

From that point things really kicked into high gear. Nomura powered out of the End Game, something few have done. Aoyagi kicked out of a top rope splash, Spear with Jackknife hold combo and the Maximum. Nomura then hit Aoyagi with a new move, the Infinity for the win. The Infinity looks like some sort of cross between a Burning Hammer and Bianca Belair’s KOD. The opponent doesn’t land quite like the Burning Hammer but not flat on their front like the KOD either.

This kicked a lot of ass as well. This was very much a grudge match with a capital G. I am also digging this new version of Nomura where he uses a lot more stiff strikes in his arsenal. ****¼

All of the other members of Voodoo Murders on this show came out with TARU. It didn’t take long for them to get involved as they started stomping on Miyahara when he got thrown out of the ring early on. Miyahara did the run-into-the-corner-and-miss spot and he hit his left elbow on the ring post. He also wore a pad on that elbow which he doesn’t usually do in order to really sell TARU attacking his arm at the tournament press conference a few days before this show.

TARU then methodically (actually very slowly) went to work on the arm. Now in defense of TARU, which is something I never do, he did find a young child in the audience who was crying at Miyahara being beaten down, and then dragged Miyahara to right in front of the child and choked him. That was tremendous heel work.

After they got back in the ring, and TARU kicked Miyahara a bunch, All Japan’s Ace made his big comeback. Or at least it looked like he was about to because TARU bumped (it was the lightest ref bump you’ll ever see) referee Kyohei Wada and smashed a chair into Miyahara’s head. TARU tried to use the powder, but Miyahara ducked and KONO got hit instead. This allowed Miyahara to hit TARU with the Shutdown German Suplex for the win. Disaster averted.

After the match, Suwama got in the ring and offered Miyahara his hand to shake and an invitation to join Voodoo Murders. Miyahara looked like he might accept. Rising HAYATO jumped in the ring to try to stop this, but Miyahara kicked HAYATO and threw him out of the ring. This got the crowd to make a lot of noise. But thankfully it was a swerve and Miyahara then gave Suwama a high kick and pushed him out of the ring. Miyahara then taunted Voodoo Murders about tricking them. This was a very well done swerve and they actually got me thinking Miyahara was turning heel for a second.

As for the match itself, well the TARU control segments felt like they went on longer than they did. I loved the crying child thing though. Miyahara’s selling was also top notch. Certainly not a disaster of a match all things considered. **¼

This was a pretty good show given where All Japan has been recently. Three of the four tournament matches were good to great and they didn’t do the absolutely stupidest thing they could have in the main event.

The angle after the main event certainly seemed to set up Miyahara winning the tournament and facing Suwama at the Budokan. I think they should have gone with something to highlight younger talent, but it could actually have been worse. With the announcements made about the 50th anniversary show here, I am cautiously optimistic it will deliver overall. 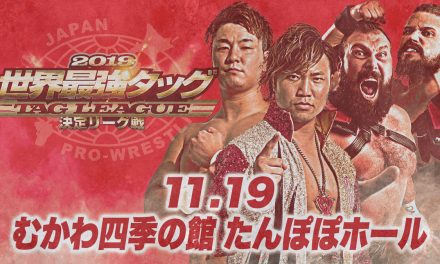