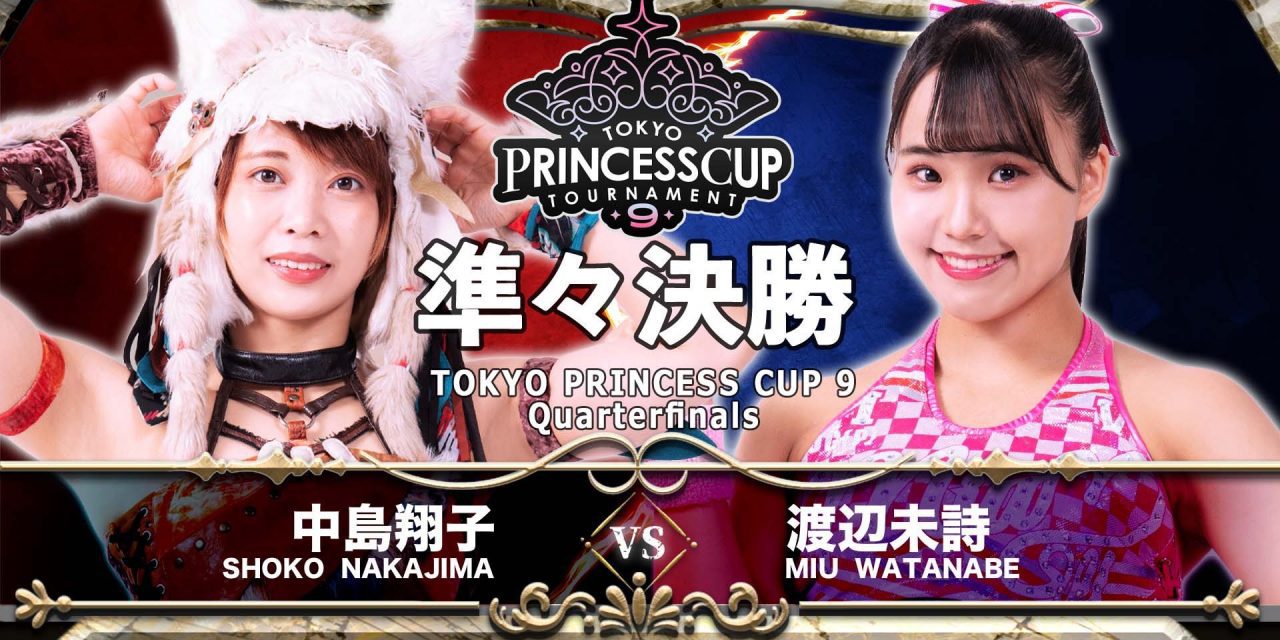 Shoko is off to the quarter-finals because Mizuki came down with a fever and was taken off of the show. No doubt a result that many are thinking may end up changing the ultimate result of the tournament. As we will see, this may have led to some subsequent surprising, but great booking.

Pom used a net on Suzume early one while brawling on the outside. Insert a bee joke here. This was fine when Suzume was in control and less so when Pom had the momentum. I can’t say I thought this was bad, and I think Pom has this weird charisma that keeps your attention even if she’s not the greatest worker.

The finishing stretch was definitely the best part of the match and Pom got a near fall with a Backslide that got the crowd to make some noise. Suzume won with the Ring-a-Bell.

I really believe that Suzume has the chance to develop into a great wrestler and a headliner for the company. **¾

This was pretty good. Rika controlled a good amount of this match and worked basically as a heel. Suzume managed to make a few comebacks and got some near falls. Rika got Suzume in a Figure Four, but there was a rope break. A Dragon Sleeper was broken up by Suzume by leaning back causing Rika’s shoulders to be on that mat. After Rika kicked out, Suzume got a cradle for the pin fall.

Nao attacked Miyu before the bell. That did not work too well as Miyu recovered quickly and started kicking Nao. She did get more luck eventually going after Miyu’s right leg after Miyu missed and kicked the ring post on the outside.

Miyu tried to make some comebacks, but the damage to the leg limited her effectiveness. Miyu finally managed to power up to hit the Attitude Adjustment then a high kick for the win. I had thought Nao had a chance at an upset here, but I guess not. Solid pro wrestling here that told a simple but effective story. ***½

This took a few minutes to get going, after they were just rolling around on the mat to start. Yuka definitely roughed up Noa for a while, but eventually Noa got in some submission holds. Yuka hit a nasty looking suplex on the apron. Noa hit an Exploder from the top rope.

Noa hit a Blizzard Suplex but was unable to keep the bridge due to her neck hurting. This allowed Yuka to rough up Noa some more, hit the Magical Merry-Go-Round then the Magical Girl Splash for the win. This got good once it had time to build, and Yuka was merciless.

They started out like it was a big title match. The feeling each other out, followed by escalating moves. Miu got in a lot of offense, but Shoko wasn’t far behind. Miu hit Shoko with a lot, but the champion kept coming back.

The last few minutes of the match had you really guessing who was going to win. Shoko got several near falls with some roll ups, but Miu kept kicking out. Then Miu managed to hit the Tear Drop to get the win. This was definitely the biggest win of her career and she certainly sold it like it was. Shoko for her part, sold the loss very well. This was absolutely the best match of the tournament so far.

Miu will face Miyu Yamashita in the semi-finals on August 13. ****

The July 31 show was very good, the strongest of the tournament so far. It provided us not only with great matches, but two big upsets that hopefully augurs some bolder booking from TJPW when it comes to elevating younger talent up the card.