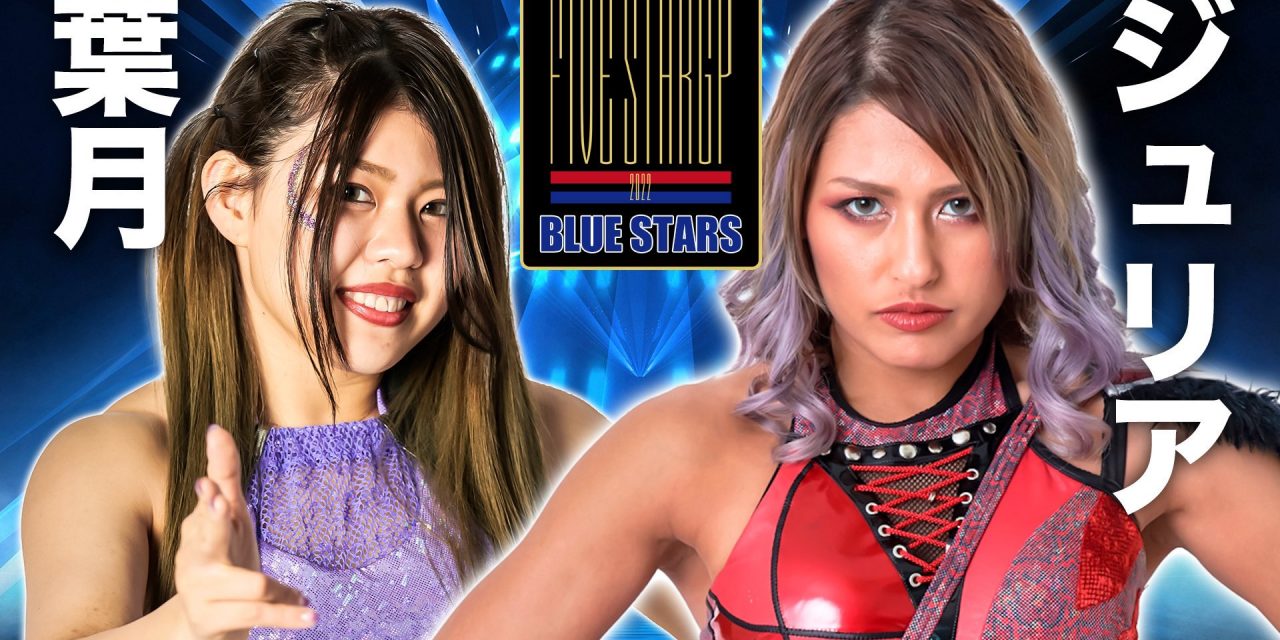 Note: Suzu Suzuki was removed from both 5STAR Grand Prix opening weekend shows due to “poor physical condition.” She confirmed testing positive for COVID-19 on Friday.

There’s not too much to say here. All talent who were not competing in tournament matches or the special tag team match on the main card was put into this pre-show Gauntlet Tag Team Match. The match itself proved to be one of the better STARDOM pre-show matches in some time with the biggest takeaway being how good Tam Nakano and Natsupoi already are as a duo. The Cosmic Angels head team pinned three different teams to win the match and showcased their potential as a team. FWC (Hazuki and Koguma) have already challenged them to a tag team match, presumably at STARDOM x STARDOM in August, so they already look ready to win themselves some gold. **½

The opening match of the 2022 5STAR Grand Prix would see Mai Sakurai and Momo Kohgo make their tournament debuts with Sakurai getting the win. There’s a lot going into this one as Kohgo was a replacement for Thekla, who had to be removed due to injury. The match started out like a blitz as Kohgo was nailing Sakurai with forearms instantly. They’d go back and forth throughout the match and while it was never going to reach the levels of one of the matches later in the night, it proved to be a good opener for the tournament. Both Sakurai and Kohgo showcased their overall improvement in this match which may be the best factor to take away from it. **¾

Ami Sourei and Saya Iida are no strangers to one another after teaming a weekend ago at STARDOM in SHOWCASE Vol. 1. The match saw them lose but the two power-driven wrestlers weren’t going to have a problem going out there and showing what they’re made of. Sourei had most of the match in hand, tossing around Iida left and right but don’t you fear as Iida fought back as she often does. They exchanged chops too so if that’s your cup of tea, this was for you. The victory for Sourei was probably the least shocking result of the night but was necessary with the likelihood Sourei has a strong tournament much like the rest of God’s Eye. **¾

There’s a style that brings out the best of Unagi Sayaka. Hazuki has brought that out of her on multiple occasions and this time around, SAKI managed to do exactly that. This match was essentially them trading big boots for the entire time and it made the match the first bout worth checking out on the night. SAKI has been great in her STARDOM appearances to this point with this perhaps being the finest yet. The often mischievous Cosmic Angel often has no problem going at her partners and SAKI certainly wasn’t going to be off limits. The win for the COLOR’S leader was much needed after the loss to Saya Kamitani at MidSummer Champions 2022 in Nagoya. SAKI is back on track and ready to roll. No doubt these two over-delivered on most people’s expectations. ***¼

Now this is where we go from good to great for the rest of the show. Risa Sera has an aura surrounding her that only few can match and she showed why in this match. The saying “opposites attract” would be a good way to describe Sera vs. Maika. Maika is the closest to a puroresu-style wrestler as there may be in Joshi. She embodies much of the hard-hitting tendencies but goes down the road of building in her matches. With a 15-minute time limit in play, it’s asking a lot to do that in such a short amount of time. It’s asking even more when Sera is going to make you go places you don’t want to. They wrestled outside the ring and inside, trading back in forth with some of the most chest-rattling forearms you’d see all night.

These two women created a fire between them that wasn’t there heading in, enhancing the match to top levels. Sera getting the win was the perfect move as she should be expected to walk out the winner a lot during this tournament. Very good match. ***¾

Anytime Syuri and AZM square off, especially in the 5STAR, you expect nothing but excellence. This was yet another time we got that. AZM walked in as the favorite for many after beating Syuri in two-straight 5STAR Grand Prix tournaments, looking for a third shock to the system. The High-Speed Champion came out of the gates as fast as possible, trying to get the World of Stardom Champion to slip up early on. As you’d expect, Syuri was able to stop the storm of AZM and began to break her down with spine-snapping kicks that got harder and harder every time she through one. But you know AZM, that’s not going to stop her from fighting back. She’d battle back to the point where she was hitting a diving stomp to the outside of the ring which was breathtaking in itself.

Instead of going through the rest of the moves, let’s understand why these two work so well together. Syuri is as well-rounded as they come. She can fit her style into any so when a former UFC fight is challenged by high-speed, it becomes an experience of sorts. AZM attempted a number of Azumi Sushi pins on Syuri with each getting closer to capturing the win but it was all for naught as the God’s Eye leader caught AZM in a Stretch Muffler and made her tap out. This was the second best match of the night — that should not be taken lightly considering how good of a night it was. ****

The return of KAIRI once again was met with excitement because this time around she teamed with former tag partner Nanae Takahashi to take on the Queen’s Quest team of Lady C and Saya Kamitani. All of this was a preview of sorts for KAIRI, who has her eyes on the Wonder of Stardom Championship. The result of this match and how we got there isn’t shocking as Takahashi pinned Lady C but more so it’s about the efforts by both Nanae and KAIRI. Takahashi has looked rejuvenated in 2022 after injuries hampered her matches over the past year. It seemingly gave her confidence also as she challenged Syuri to a World of Stardom Championship match. Big time to say the least.

But hey, let’s talk about KAIRI. There have been some knocks on “The Pirate Princess” since returning as she’s had really good matches but hasn’t fully embodied herself and what she was prior to leaving STARDOM. Well… she found it! It was the best she’s looked and every single time she and Saya Kamitani got to wrestle, it was magic. KAIRI hit hard, had the aura that makes her special, and has the attitude that makes me think another title reign could be on the horizon. Watch this to see KAIRI be KAIRI. It’s worth it. ***½

MIRAI had the challenge of her career this weekend. Day 1 against Mayu Iwatani and Day 2 against Giulia. To say she lived up to it on Day 1 would be on par as not only did she defeat “The Icon” of STARDOM but showed the doubters that maybe there’s a reason she is in the position she is in. Iwatani was out of her mind as she often is in tournament matches which is what led her to her downfall. For most, it has to be the failed suicide dive that saw Iwatani crash and burn onto the floor while MIRAI walked away unscathed. This isn’t to take credit away from “The Soul Fighter” though as MIRAI introduced a new variation of her devastating lariats. She clubbed Iwatani in the back of the head on multiple occasions, leading her to hold onto her neck as she tried to get it together.

In the end, MIRAI’s Miramare was the final blow to defeat Iwatani and get the biggest win of her career to this point. A quality showing on Day 1 for both competitors. ***¾

The only 5STAR Grand Prix Finals rematch in the tournament lived up to the hype. STARDOM’s two premier powerhouses went head-to-head in the opening day of action and did not let us down. Utami Hayashishita dawned the long hair that was part of her historic World of Stardom Championship reign and for the first time felt like the star she was all year in 2021. On the other side was Himeka, who continues to have a chip on her shoulder in her journey toward singles success. What made this match so exciting was what these two have been able to do in their tag team encounters over the last year. Each time they’d square off, it would be power vs. power trying to see who could break through. The exchanging of Clotheslines was often the best part of it all.

Hayashishita was unable to use the magic of her old World of Stardom Championship look to get the win as it was Himeka who hit the running Powerbomb to put Hayashishita away. These two have top tier chemistry and will forever be a hopeful title match of mine. Someday maybe. This match was good enough to hold us over until then. Excellent match. ****

Match of the night. Potential match of the tournament. The reason the 5STAR Grand Prix is the best wrestling tournament in the world right now. I joked on Twitter earlier in the day that if this match got the main event then no one would hear the end of it because the match is exactly what fits the main event. There were no definite. A 5STAR Grand Prix final rematch was the most reasonable match but it didn’t matter. When you have two competitors who have the unique history that Hazuki and Giulia have with one another, there’s nothing but magic guaranteed to come from it. The moment the bell rang, these two were trying to take off each other’s heads — nothing less. They have showcased in previous tag matches the disdain they have and displayed that from start to finish.

The two points up for grabs weren’t even what mattered at times. Destruction was what the focus became. Giulia and Hazuk traded forearms, including one from Giulia that rocked Hazuki to the point she bounced off the ring apron early on. Giulia then utilized the referee to launch herself into Hazuki with a Missile Dropkick while they were on the stage. Hazuki came right back by knocking Giulia down the stairs and hitting a Diving Crossbody to wipe her out. The amount they managed to fit into this match means I can’t do it all justice, but what I can do justice was the brilliance of the finish. As Hazuki closed in on the win, she hit a headbutt to Giulia, followed up by a Michinoku Driver. She’d finish off the closing sequence with a Vertical Drop Brainbuster, pinning Giulia and winning the match.

This was in many ways all I look for in wrestling. You can love your rest holds and epic build because you know what? I often enjoy those epics as well. But this wasn’t about that. It was about an existing feud that saw them show out in the biggest spot possible — the main event — and waste zero time in telling their story. Hazuki and Giulia stole the show, owned the show, and have the early favorite for match of the tournament. Adored this match and what these two accomplished. ****¾

For more information on the remainder of the 5STAR Grand Prix tournament, check out the guide here. 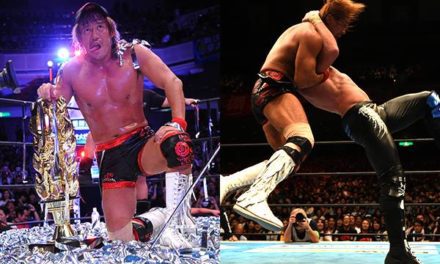 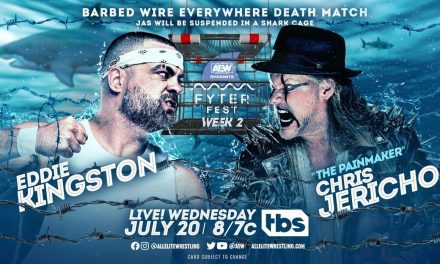