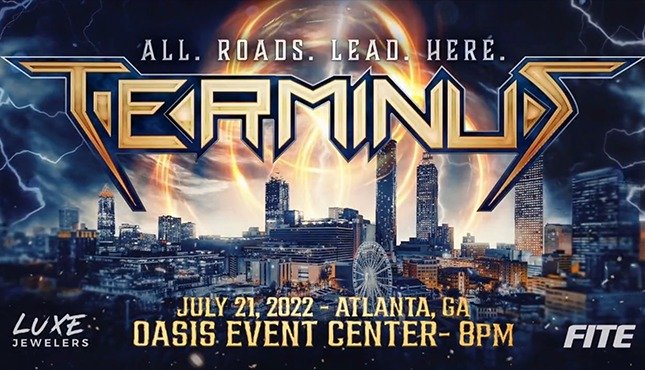 Terminus 1 & Terminus 2 were a mixed bag both production-wise and match quality-wise. The ending of Terminus 2 was so frustrating, I virtually wrote off the promotion as one I need to follow. But just when you think you’re out, Jonathon Gresham books a match between himself and Konosuke Takeshita. So, here I am. Jumping on the grenade that is reviewing a Terminus card. This card features Jay Lethal and the aforementioned Gresham and Takeshita, so how bad could it be? This review will be written in real time and Pure Rules will be enforced. I purchased the new X Box today and it is currently downloading my library of games, so just like a Terminus match, there is no time for gimmicky bullshit.

The well-produced opening montage plays before we are sent ringside for the opening contest. I am already stoked, Ian Riccaboni and Dave Prazak on the call!

Kaun has apparently thrown down a challenge to anyone who wants to face him tonight. The challenge has been answered by……Cheeseburger. This should be a spectacle. Sidenote: both competitors are in tremendous shape.

Kaun enjoys a clear weight and strength advantage over his opponent. But the experience advantage goes to ‘Burger. Just as I am concerned this match could overstay its welcome, Kaun nails Cheeseburger with a huge clothesline and fireman’s carry finisher to win this open challenge in about six and a half minutes. Good but not great opener.

Invictus Kash is back to take on the also returning Mike Bennett. I think this is three Terminus shows in a row for both of these men. Kash has really put in the work in the gym. He looks to have put a lot of muscle weight on since I last saw him wrestle. Unlike match one, we get a handshake to kick this one off.

There is an offensive flurry by both competitors to open the first couple of minutes sending the action spilling outside the ring. These guys are wrestling with an intensity that was absent in match one. Kash locks on an innovative submission that renders Bennett’s left arm useless for now. It has become an arm match as Bennett locks a submission of his own on Kash’s left arm. A superkick and Spicoli driver combination is not enough to put down Kash at the five and half minute mark. Bennett delivers a flurry of forearm shots but Kash fights through them to lock on a rear naked choke variation for the win. Not a wasted movement in this match and overall, a very fun watch.

A rematch is up next. Following their previous Terminus match where Lethal defeated Baron Black in a technically sound match that went to overtime, Baron Black is looking to repair his reputation and legacy against the always-ready Jay Lethal. Jay Lethal is not taking any time off in the run up to the Ring of Honor pay-per-view Saturday, maybe Baron Black can catch him off guard. Jay has the ring announcer read a custom introduction highlighting Lethal’s accomplishments. I think this one will go the limit for a second time.

Lethal plays the chickenshit heel once the bell rings by rolling out to the floor and taking his time to get the match started. I won’t be going move for move here, but Christ on a cracker, Lethal delivered some brutal chops following a barrage of kicks to Baron. I have not watched Baron Black before Terminus, so I may be way off base here, but he seems to have improved since Terminus 1. Lethal hits an unsuccessful Lethal Combination with about six minutes to go, furthering my belief we are going the distance. Well, a prognosticator, I am not. After a false three count, Black gets caught from behind with a Lethal Injection with under four minutes to go. Building momentum, this match was better than the previous two.

Despite two losses to Lethal, Black tells Jay that he has Lethal’s number. Not sure where the logic is for this, but Black wants one more match. Lethal appropriately shuts Black down and exits the ring.

Holy shit, Gresham versus Takeshita is next!

I am really looking forward to this match, I hope the placement on the card is not a sign of what kind of quality we are going to get. Takeshita has been a joy to watch on his excursion. Whether in AEW or visiting an independent promotion, he has put together a string of great matches with a diverse set of opponents.

The opening minutes of this match put my fear to rest, these guys are in the mood to go tonight!! Takeshita seems to be adding to his ever-growing arsenal with every subsequent match. The size differential on display here is quite the visual. Gresham is usually the smaller guy, but Takeshita looks to have a foot of height on him. The height difference means nothing when it comes to the many ways Jonathon can tie Konuske into a pretzel at any moment. Takeshita hits Gresham with his patented running knee followed by a forearm exchange rendering both men prone on the mat with about six minutes to go. These last few minutes are hectic, frantic and full of intensity. Oh my god, this is incredible! The Octopus spot with one minute to go is worth the price of the pay-per-view. Notebook material and worth seeking out, I can’t recommend this enough. Definitely on my short-list.

Time for the regularly scheduled tag match. The Factory taking on Prestige Wrestling Tag Champions, C4. QT Marshall has an Alex Jones level punchable face and perhaps an overzealous fan in the front row feels the same as me. Hopefully said fan does not take Marshall’s challenge to meet him in the parking lot after the show. This is my intermission match as I could not be less interested in The Factory. I swear every time I see QT I expect him to begin raging on a microphone about the globalists and ‘false flag’ school shootings. I guess that makes him an effective heel. Uh oh, QT loses his composure and slaps the rowdy fan who riled him up prior to the match. Things almost fell apart until Solo broke it up. Now, I am more interested in just what the fuck the fan said to piss Marshall off this bad. He is still jawing at him. If I am the fan, I think I call it a night. In fairness to QT, the dude seems to have a man bun of some sort which is almost as egregious as being an Alex Jones doppelgänger. Anyhoo, the Factory win due to interference by Marshall. Skippable.

Hell yes, it is main event time. A nice and tidy show under two hours is always a welcome surprise.

Masha Slamovich who is a mainstay on Impact Wrestling and on a twelve-match win streak (thank you, Ian for the information) looks to defeat Queen Aminata who has become a Terminus regular. I expect this to be a hard-hitting match. Slamovich wants to keep it Pure and start the match on the mat which Aminata is not interested in at all. Masha drags Aminata to the mat and forces an armbar on her. We are now seeing an exchange of mat wrestling skills by both women. Both wrestlers are in a more playful mood than normal for either of them and the ring work on display emphasizes this. With ten minutes to go, this match has been very methodical and sloppier than expected. With five to go, the action has picked up. Slamovich hits a Snowplow to Aminata for a two count with two minutes to go. Aminata locks on a Koji Clutch with a little over a minute to go forcing a tap by Masha. Nothing special at all about the main event.

Consistent inconsistency from the folks at Terminus. Regardless of the quality of any of the other matches, this show was worth the time and money for the exhibition of brutality by Gresham and Takeshita. If you are reading this, I see no reason why you shouldn’t seek it out. Now, I need to go so I can experience gaming at 120 fps, whatever the hell that means. 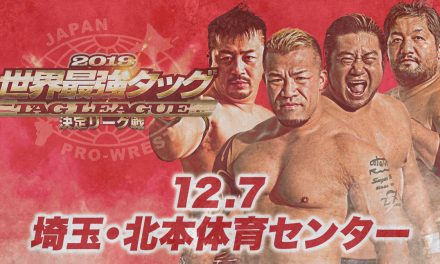