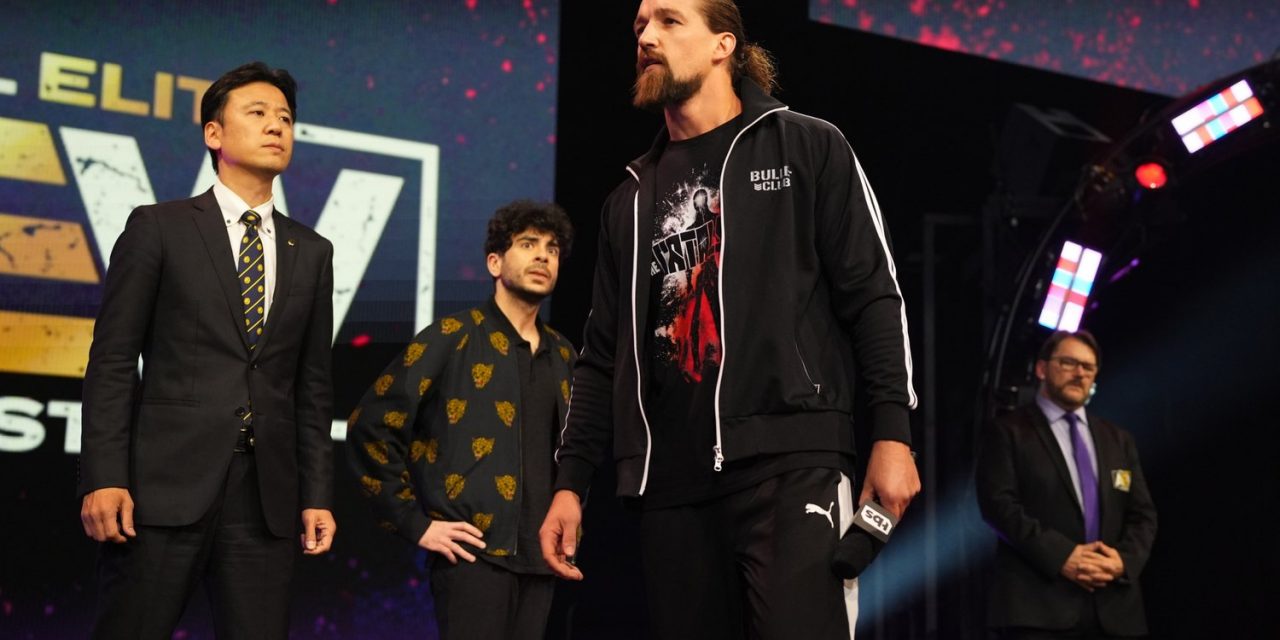 As Tony Khan spoke in his pre-PPV media call before Forbidden Door on Friday, June 24, it was clear that the Owner of AEW had some frustrations with the way the PPV had been built up on his television program. Khan, whose interviews during these media sessions can range from unreserved, to tight-lipped, to downright rambly (at one point he just started listing Canadian cities), was candid about certain aspects of the promotion leading up to the PPV this Sunday.

Perhaps most notably, Khan seemed annoyed that he was unable to get major New Japan Pro Wrestling talent onto his weekly programming sooner. At one point, he bluntly said that he wanted Kazuchika Okada on AEW television well before the NJPW superstar appeared for the first time on Dynamite on Wednesday.

“Would I have loved to have all of the people on TV longer? Yes,” Khan said. “I found out [Okada] wasn’t coming until the week before. I just had to deal with it. I would’ve loved to have had Okada sooner.”

Later in the presser, Khan mentioned having similar feelings about other talent. He told the media that he had asked to get major NJPW talent over to the United States in the weeks leading up to the show, and fought to have Will Ospreay in advance of the PPV, with mixed results.

“It was hard to book the show already because not all of the top New Japan stars that I wanted to use were going to be available and some of them were not going to be available until later,” Khan said. “I had to pull harder to get Ospreay in earlier than he probably would have come otherwise; ahead of Dominion.”

Those frustrations that Khan had mirrored feelings felt by many fans, who were disappointed that the show didn’t announce many matches for the PPV until the week before the show, and many of the matches feel almost randomly thrown together, with little to no television build.

That kind of promotion for the PPV is different from how AEW normally promotes its PPV events, which typically have a card solidified well in advance and each match usually having a build that lasts, at a minimum, a few weeks. The differences highlight the challenge of doing a true inter-promotional show and the political and logistical challenges that have taken the air out of the sails of what many fans anticipated as being the most exciting wrestling event of the year.

In AEW, Khan wields complete and absolute authority over his product as the owner and the creative head of the company. While different figures may have input on his show, ultimately he makes or approves all of the decisions and matches that take place in his company. Working with another company to promote a show together is a much different challenge, and that is reflected in the awkward and late-arriving build for the show.

Khan’s frustration also likely stems from the fact that while this is a jointly-promoted show, since the event is happening in the United States, it will be viewed by the public as basically an AEW show, featuring NJPW talent. The credit or blame for the show will not be shared equally by the two promotions; if the show tanks, Khan will be blamed by critics for doing a poor job promoting the show, even if he wasn’t in complete control of the show the way he normally is for AEW’s PPVs.

While Khan basically explained his side of the issues during the press conference–that New Japan did not make its top talent available to be around for what Khan felt like would be a proper television build for this PPV–we have less information on the NJPW side of the relationship.

We know that NJPW had their own major event, Dominion, two weeks before Forbidden Door and likely didn’t want to promote Forbidden Door ahead of that event; which Khan alluded to when he said that he originally wasn’t going to be able to use Ospreay until after that event. A common practice in NJPW is for when they have their own major shows in close proximity to one another; they typically will announce nothing for the latter show, waiting until the first show is complete before doing a rapid build for the second show. That may be an effective model in Japan, but in the US, where fans are accustomed to major PPVs being built on weeks-and-months worth of television, it’s not an ideal strategy.

There are plenty of potentially valid reasons for why NJPW didn’t want to make talent available earlier. Maybe they balked at some of Khan’s creative suggestions; maybe talent was not keen on traveling back-and-forth, or taking an extended stay in the United States. A rumor has been going around that Okada himself was not enthusiastic about appearing on the show, and was a late-minute creative addition to help give the show a boost of needed star-power. Perhaps Khan’s communication with NJPW was poor; that wouldn’t be surprising especially when we are talking about two companies from very different cultures.

While we might never know how NJPW really felt about the plans leading up to the PPV, not having the NJPW talent around earlier for the promotion of the show greatly hurt anticipation for the show. Fans who were unfamiliar with the personalities of NJPW are still largely unfamiliar with them, with the possible exception of Ospreay and Jay White. The lack of match announcements prior to Wednesday created unnecessary fan anxiety and already soured some previously-enthusiastic fans on the show, which feels haphazardly put together.

NJPW probably wasted a prime opportunity to get their major stars on a top-rated American television program, which is a mistake. If you believe that Khan had weeks’ worth of storylines plotted out for them if they had been around, which he alluded to in his press conference, it would have really benefited NJPW’s business if those talents had been available. It is the latest question mark in the company’s awkward approach to its forays into the American market; where the company has been successful in gaining a following but inconsistent in its efforts to capitalize on those fans.

At the same time, Khan and AEW could have done more to promote the wrestlers of NJPW on AEW programming. The company didn’t air any video packages promoting the incoming NJPW talent; a frequent criticism of AEW and one that is front and center when the company is building a PPV featuring wrestlers that a significant portion of the audience are unfamiliar with.

When NJPW talent was available, such as Zack Sabre Jr. on Wednesday, they were not given significant promo time to acquaint themselves to the audience. Perhaps if NJPW talent had been around earlier, they would have gotten more promotion time on television; or perhaps they would have remained in the background. We will likely never know the answer.

There were also other issues that hampered the build; injuries being the most obvious. CM Punk’s injury forced a change to the obvious main event match, and Bryan Danielson’s injury took another dream match (against Sabre Jr.) off the board. There is nothing the company could have done about those things, but it still hurt the PPV.

Politically, these kinds of shows are always going to be a challenge; which is why something like Kazuchika Okada vs Hangman Adam Page can’t take place, and a four-way match has to be there since neither company wants their top-protected guys dropping a fall. This is frustrating to fans who would prefer to see just straight singles matches, but pretty much every joint-promotion show is worked out like this.

When the show was first announced, fans naturally got as excited as possible thinking about all the killer dream matches that could take place. The end result of what is happening on Sunday probably looks very different than a lot of those fantasy booked cards, and the inconsistent build of  these lesser-anticipated matches hasn’t helped.

However, if one looks at the history of joint-promoted shows, the Forbidden Door card looks pretty good in comparison. It blows away the NOAH/NJPW show from Wrestle Kingdom earlier this year, which only featured two lower-card singles matches and no title matches. Despite late arrivals, almost every significant NJPW star is on the show, with the exception of Tetsuya Naito.

The main event is a match that has had a lot of build on NJPW’s American programming and should rock. Many of the frustrations fans might have had leading up to Forbidden Door will likely be rectified by the show being very good; as there is a ridiculous amount of talent on the card and the crowd should be hot for everything.

Ultimately, frustration that fans have had with the build for the event is a sign of a healthy company. Fans were very excited about Forbidden Door when it was first announced because AEW and NJPW both have track records of delivering on fans expectations and producing a great product. Fans had faith that the show would be incredible; and while those fans might be disappointed at the moment, as long as the show isn’t a complete disaster in the ring, most of them will still be optimistic about the two companies. Fans having high expectations for your show is a good thing because it affirms a positive outlook on the company, and while you never want to disappoint those fans, you also are never going to bat 1.000.

One just needs to look at WWE, which has a PPV event next week that currently has six matches announced, zero world title matches, and very little star power, and see a company that has created low expectations for their product and thus a weak build to a PPV event flies completely under the radar. The fact that fans really, really care about something not being up to standard is ultimately a positive for a wrestling company.

On the latest episode of the Gentlemen’s Wrestling Podcast, Jesse Collings (@Jesse Collings) and Jason Ounpraseuth (@JasonOun95) talk about Vince McMahon stepping down for the time being as WWE CEO and his role on the Board of Directors. The guys talk about the Wall Street Journal article about the Board of Directors investigation into Vince’s relationship with an employee, the impact the story has had, Stephanie McMahon being brought in as interim CEO, a WWE future without Vince McMahon and more. 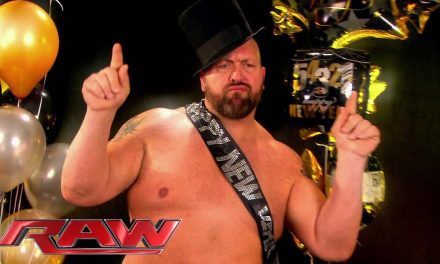 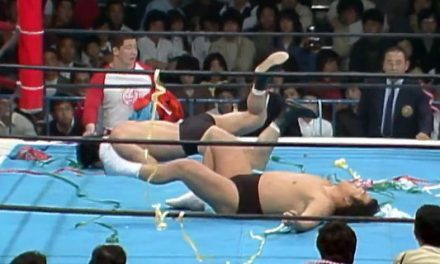