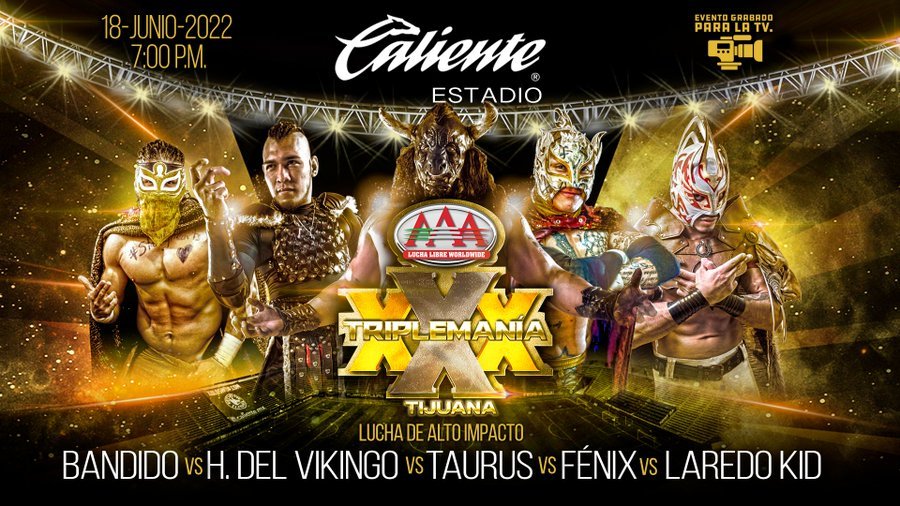 As this was part of the women’s Ruleta de la Muerte mask tournament, the losers advanced to the mask vs. mask match later that night. The last two luchadoras in the ring at the end of the match would be the losers. This didn’t take long to break down into a slow brawl where Las Toxicas and Chik Tormenta attacked everyone else with weapons. Reina Dorada had a chance to escape but she jumped from the top of the cage to take out the others. Sexy Star is the best wrestler out of everyone and her Kenny Omega inspired moveset is great.

Reina Dorada was the first to escape the cage to save her mask. Hijo de Tirantes was the referee and stopped Lady Shani from escaping. It’s classic AAA but it’s very played out. Sexy Star was the second to escape. Lady Shani escaped but the Fite stream randomly switched to a replay of a AAA press conference.

This left Chik Tormenta and all three of Las Toxicas. Tormenta brought out a light tube and had her way with her opponents and then the Toxicas started fighting each other. Hiedra and Maravilla climbed to the top together but Hiedra knocked her partner back into the ring and escaped. Despite that, Maravilla launched Flammer through a wooden board and escaped the cage like a bat out of hell to end the match.

Flammer and Chik Tormenta will wrestle later in the night in the Ruleta de la Muerte Mask vs. Mask final. They had some good spots in the match but it went way too long. **¼

Rey Xolo is a brand partnership with the Club Tijuana Xoloitzcuintles de Caliente soccer team that play in this stadium.

Mr. Iguana and Abismo Negro Jr. started the match, very smart booking as they were the best wrestlers in the match. We got the super loud countdown explosion in true AAA fashion and it’s the best. Mecha Wolf and Bestia 666 were surprise entrants. Vampiro, representing all the Juggalos around the world, came out and looked good. Tijuana’s own Bestia 666 got a loud pop and shone. Damian 666 ran in before Charly Manson’s entrance and joined the match despite not being an actual participant.

Vampiro took a brainbuster from the top rope. The eliminations were quick after Cibernetico entered as the last entrant. Pagano and Cibernético basically eliminated each other and they brawled all the way to the back, leaving just Mamba and Hamburguesa at the end. Nino quickly punched Mamba off the apron to win another Copa Triplemanía. **

An unreal amount of talent in this match. Early on, Taurus used his power and agility to take out all four of his opponents. After that, things got wild and luchadors flew all over the ring and surrounding area. Vikingo took control early on and showcased his underrated power. Vikingo is one of the best wrestlers in the world.

Vikingo jumped from the ring post to the top rope to then hit a dive on a different side of the six-sided ring. Truly insane stuff from the Mega champion! After a Bandido cutter on Vikingo on top of Taurus, Fénix springboarded across the entire ring to break up the pinfall. A bit later, Taurus pounced Fénix off the stage but then ate a tijeras from Laredo! Vikingo then hit a disgusting poisonrana on Laredo followed by a running second rope springboard 630 that crushed Kid!

If you think that’s wild, Laredo then hit a tijeras on Vikingo off the top rope to the floor outside the ring! There was way too much going on. I’ll add GIFs below.

This happened within the span of sixty seconds:

Taurus press slammed Vikingo from the top rope but the pin was broken up by Laredo and Bandido. These five men are fucking insane.

Unbelievable! Vikingo knocked Fénix off the top rope and then hit the 630 on Taurus for what should’ve been the win but Fénix hit a frog splash to break the pin. He then hit a double stomp on Taurus to get the much deserved win!

Laredo Kid’s reign as Cruiserweight champion ends at 1,217 days. Taurus’ reign as Latin American champion ends at 406 days. This is what lucha libre is all about! Five of the best wrestlers in the world going out there and having a batshit insane wrestling match. You need to watch this match. It will rank high on the Voices of Wrestling Match of the Year list. *****

Between matches, AAA Reina de Reinas champion Taya Valkyrie called out AEW World Women’s champion Thunder Rosa and challenged her to a match to determine who is the best. That should be an interesting match.

We then got a segment honouring Konnan for his contributions in wrestling. La Familia de Tijuana, Rey Horus, Taya, and Fénix came down to thank him and presented him with a lifetime achievement award. Konnan thanked everyone and surprisingly there were no shenanigans. Good for Konnan. Have u heard his podcast?

This started hot with Demon cutting Pentagón’s entrance short with a cheap shot on the ramp. Demon went right for the mask and mocked the younger wrestler with the Cero Miedo taunt. The match spilled to the outside and Pentagón was thrown into the crowd, knocking over a woman and then the plunder came out and brought into play.

Pentagón tore Demon’s mask to even the score. Tirantes’ slow as molasses counts took away from the drama of the nearfalls. Marty Elias should ref all of these matches. Demon hit a sick Canadian Destroyer for a nearfall! That wasn’t enough but he followed it up with a hammer shot and then a Canadian Destroyer from the top rope through a table for the win.

Reyko interfered to break up a pinfall attempt and then the husbands started fighting in the middle of the ring. The women kicked them out of the ring, as they should. Los Vipers’ Toxin and Abismo Negro Jr. came down to the ring and obliterated Flammer with a chairshot to the head.

Las Toxicas ran out to make the save and took them out to bring this back to a one-on-one match. The two luchadoras traded forearms and chops but Reyko interfered yet again to break up a Flammer pinfall. Tormenta hit the double knees but Tigre broke it up to take out Reyko. Tormenta forgot to kickout but referee Marty Elias stopped the count and said she did. Not wasting any time, Flammer then slammed Tormenta through a wooden plank in the corner to get the win, forcing Chik Tormenta to unmask.

Chik Tormenta is Cristina Azpeita Ramírez from Guadalajara Jalisco and she has been wrestling for 16 years. This was a fine apuesta match. I wasn’t a fan of all the husband interference but it made sense story wise. ***¼

This was a battle of great entrance themes. Like the other Men’s Ruleta de la Muerte match earlier, Villano started the match right away by attacking Psycho during his entrance and then ripped the mask to bite Psycho’s bare forehead. The match spilled to ringside and Psycho ate a hard chairshot to the top of the dome followed by a beer bottle shot.

The blood flowed as the Clown struggled to fight back. Villano was beating Psycho’s ass like he was owed money. Psycho finally fought back and tore Villano’s mask to give the legend a taste of his own medicine with broken beer bottles and a damn vuvuzela. Both men traded the offence afterwards and neither of them wanted to give up. Psycho tried to put an exclamation point on the match with a powerbomb through a wooden plank but Villano somehow kicked out.

… and out came the thumbtacks to go with the broken glass. Psycho unloaded with a flurry of punches. Pierroth got in the way and ate a Villano elbow and then Psycho went back first into the tacks! Villano had the visual three count. Psycho came back and hit an Air Raid Crash into the thumbtacks and Pierroth came back to life to count the three.

Villano IV advances to the Ruleta de la Muerte final on October 15th to face Pentagon Jr. in a mask vs. mask apuesta match. This was a lot better than I thought it would be. Despite some physical limitations, Psycho and Villano punched the shit out of each other at the end to try and end the match. Villano IV has certainly earned a big paycheque at the third Triplemanía of the year. ***½

Johnny Hardy did the Jeff Hardy dance. There was a lot of stalling and playing to the crowd at the start of the match as we reached the fifth hour of the show. It would’ve been nice if they started wrestling right away. Dralistico and Johnny started and did a pose off. Can’t they just wrestle!?

When they did wrestle, it felt like a very basic house show main event where the American wrestlers played their greatest hits while the Hermanos Lee bumped like crazy for them. Johnny and Matt did all the Hardy Boyz spots. The only cool spot was Dragon Lee doing an insane tope suicide into the crowd to take out Johnny Hardy.

After some miscommunication, Johnny Hardy kicked Matt in Hardy’s boyz. Dragon Lee then got the pinfall on Matt (after Dralístico accidentally broke up the count with a moonsault). Other than Dragon Lee doing his insane tope, this felt like a very paint-by-numbers match. Matt Hardy did put his working boots on and he tried his best but it did not feel like something worthy of being a main event, especially after that insane five-way match earlier in the night. ***

I want to give a special shoutout to Larry Dallas and Joe Dombrowski, the English commentary duo. They are very good at their jobs. I am very happy we have a great English commentary team for these shows. They add a lot to the broadcasts. Hopefully good commentary entices more people to watch these Triplemanía shows and that tremendous five-way match.

Speaking of, you need to watch that Cruiserweight and Latin American title match. That match is a Match of the Year Contender and should finish in the Top 10 of the Voices of Wrestling Match of the Year list. That should have been the main event.

This was a very long five and a half hour show where things flew by during the actual matches but all the filler dragged on and on. I would recommend everything from the five-way madness to the Psycho/Villano match. Another fun night of Lucha Libre AAA action. 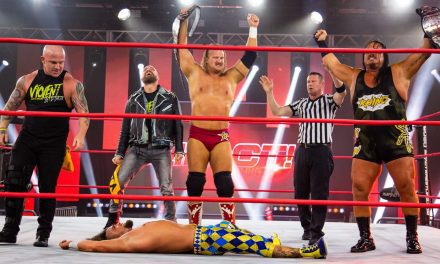 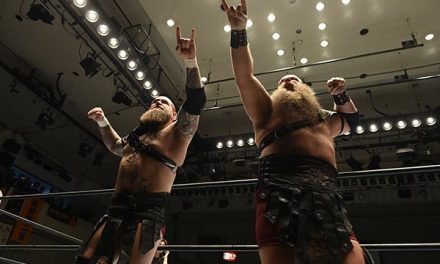 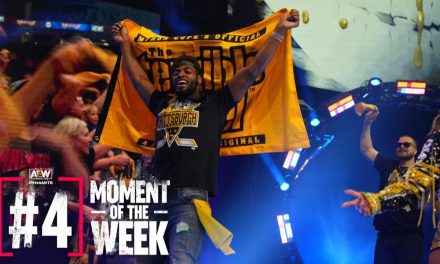