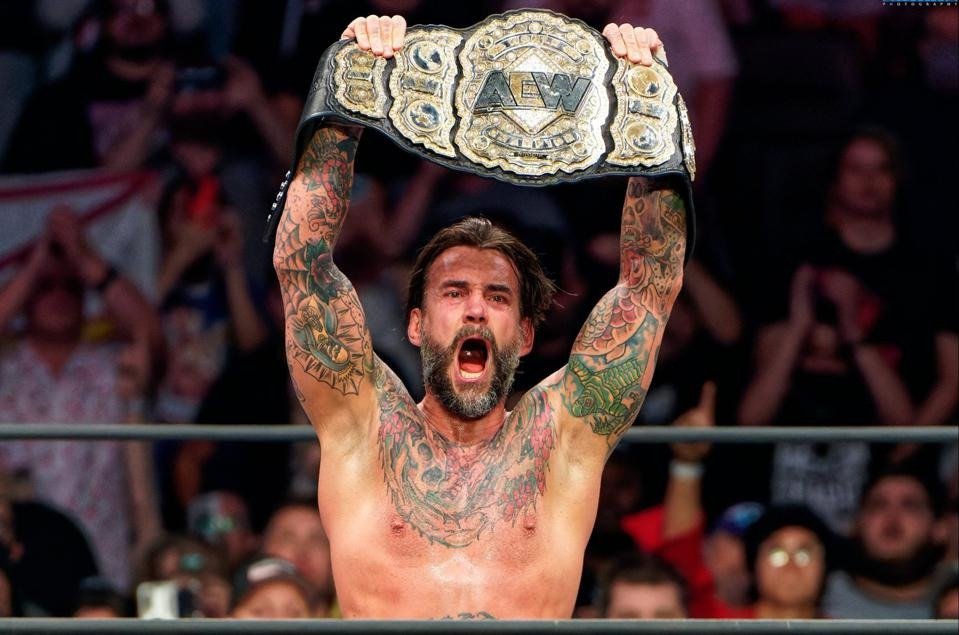 CM Punk’s recent AEW championship win was impactful for many reasons, both in real life, storylines, and in future stories yet to play. For me however, the most important part of Punk’s victory in Las Vegas is that it represents a huge shift in the character of the AEW World Heavyweight Championship.

Now, depending on the upcoming events in the wake of CM Punk’s injury, this article could take on a whole different meaning. And while Punk’s surgery and the new plan for an Interim Champion may have derailed AEW’s booking in the short term (and perhaps the long term), it doesn’t change the significance of Punk’s victory at Double or Nothing and what it means to the character of the AEW World Championship.

That’s right I said the World Title has a character, twice. Or perhaps a better way to put it is that the World Title has a story. If one looks back on the first All Out and the crowning of Chris Jericho all the way to Hangman Page’s win, the booking of the AEW World Championship has told a consistent story as it moved from wrestler to wrestler. With Punk’s win, you could say a new chapter has started or perhaps a whole new book in the series is being written.

Before CM Punk became the champion, the AEW World Championship moved in an almost perfect linear fashion to wrestlers that were less and less established by outside wrestling companies, and onto those who have been more and more established by AEW. It was a great strategy that allowed AEW to capitalize on the biggest stars they had at first. It gave them time to build up new stars who some of the audience may not have been familiar with. Then, when these wrestlers were ready to hold the title, the booking had already put them at the level of the ex-WWE or NJPW stars who were the first champions. It was a very successful use of the “heat transfer” theory that many hope to achieve.

A legend of the industry who had worked in every major American wrestling promotion for nearly 30 years. This included significant time in both WCW and WWF from the highly viewed Attitude era to later feuds with Shawn Michaels and Kevin Owens during the WWE monolith era. He also has experience in Japan, including recent outstanding Tokyo Dome matches with Kenny Omega and Tetsuya Naito – giving him the in ring credibility that a big part of the AEW fanbase required.

The move to Jon Moxley at Revolution 2020 was a perfect change. After Jericho, Moxley was probably the most established main event caliber wrestler with extensive WWE experience and visibility. However, Moxley didn’t have nearly as long a career in WWE as Jericho, and his split from the WWE was soon followed by a nearly scorched-earth series of interviews where he didn’t hide his disdain and disgust for his former employer. Even with one being on Jericho’s podcast, Jericho himself has remained careful to never blatantly bash WWE or Vince. That Moxley “eff you” attitude in the interviews, along with showing up as a surprise at Double or Nothing, and fighting Juice Robinson in NJPW was all wrapped up in his unique charisma was the perfect storm for the moment it happened. That combination of factors instantly made him a rebel and an “AEW guy.” He was not an “ex-WWE” guy.

Dean Ambrose was dead and gone.

After tapering down the WWE tenure length from Jericho to Mox, AEW next made a big jump in going to Kenny Omega.

Here they picked someone with no WWE experience at all. Kenny made a name for himself in Japan in the DDT promotion and then with a superstar run in New Japan Pro Wrestling featuring multiple Tokyo Dome main events, match of the year (and even decade) candidates (and even winners) along with a run with the IWGP Heavyweight Championship. Kenny was a key part in NJPW’s rise in North America as the alternative to the progressively worsening WWE.

With those fans being a key target for AEW, Kenny was the logical next choice for champion. His starring role in the Being the Elite YouTube series cannot be denied as well, and made him a founding father of AEW along with Cody and the Young Bucks. So while he may not have had the WWE experience for the “casual fan” the hardcore wrestling fan that would flock to AEW were already familiar with Kenny and knew he was main event material.

The multi-year story of Hangman Page overcoming Kenny to win the AEW World Title at Full Gear 2021, also told the story of the title being able to be carried for the first time by someone who wasn’t a World Champion in a previous company. In fact Hangman’s resume kind of reads like Kenny Omega lite, which even plays into their feud, with Kenny almost treating Hangman like a little brother.

Hangman, therefore, had to build himself in AEW. He had to win over the fans and get to that main event level. He didn’t come in on day 1 with the majority of fans thinking he should win the world title. His win continued to shift the amount that the World Champion was an “AEW guy” more than anything else.

And this is why his match with Punk at Double or Nothing 2022 was so pivotal.

Would the AEW World Title continue to be carried by Hangman until he lost it to someone with even less experience prior to AEW than him? Or would they put it on Punk – the man that made a triumphant return to wrestling and was quite likely the biggest star in the company. And despite the likelihood that calling him a “WWE guy” would make him throw up (in all fairness he is a self-declared “Paul Heyman guy”), there’s no denying that other than Jericho – Punk had a more impactful WWE career than any other former champion.

In the end, though, they went with Punk. And while this injury may or may not derail the story they wanted to tell with this title run, it still signifies a detour or change in direction for AEW. For three years they had firmly been on the road of decreasing the amount of pre-AEW main event experience with each champion.

Now, just because Punk is taking us down a different road, that doesn’t mean it’s a bad thing. Many fans are likely disappointed that Hangman lost to Punk (including me), but it is possible that this new road could lead to a much better place.

It could even be a worthwhile detour that AEW takes before returning back to the road it had been traveling with establishing stars.

The logical move of having CM Punk eventually lose the title to MJF would get the AEW title right back on that trajectory.

In fact, MJF’s recent “fire me” tirade speaks to the anger some fans may also have been feeling due to the symbolism of CM Punk’s win. Was AEW slipping away from the day one originals who helped build the company and being taken over by the bigger and older stars that waltzed in over the past 6-12 months?

Before the Punk injury, I imagined Forbidden Door ending with MJF returning for the first time since his “mark” promo at The Forum and violently beating down Hiroshi Tanahashi and Punk. Any goodwill that MJF had built up with that promo (as evidenced by the HUGE cheers from the audience that night) would instantly be evaporated by beating down the beloved Ace and the Hometown Hero. In fact, it would be even better knowing that many fans were starting to like him after that promo and it now lets him pull the rug out from under them. It then perfectly sets up MJF beating Punk in Chicago once again, this time at All Out for the World Title.

Whether it would have been Punk or Hangman who eventually lost the title to MJF, his win would make him the first wrestler with almost no major track record prior to AEW. Some MLW ain’t gonna cut it. MJF has just about been fully realized as a character, in-ring wrestler, and star within the timeline of AEW. He didn’t have the years of NJPW or ROH time like Hangman.

The person MJF could then lose the title to in order to continue this narrative is then pretty clear. It’s Mr. Mayhem himself. The War Dog. Wardlow. Not only does it make perfect sense for the MJF/Wardlow story, it also would put the title on someone with even less pre-AEW spotlight than MJF. I mean you could even argue his pre-AEW exposure was nothing.

After Wardlow, determining the next champion is where it would start to get tricky. At this point, you would have to go with someone that was more or less trained from their first day in AEW and had wrestled almost nowhere but AEW. HOOK is the first one that comes to mind. And damn. HOOK vs. Wardlow in a couple of years? Sign me up.

At this point though, Wardlow presents the best opportunity to change the story of its AEW world title. If people like HOOK aren’t ready, or people similar to Wardlow’s status like Powerhouse Hobbs or Ricky Starks (though I would argue Stark’s NWA run gave him more shine than Wardlow had pre-AEW) aren’t either then a new direction would make sense. Maybe it would be time for a second title run. Moxley needs some time as champion with actual cheering fans, and may have a heel run in him (they seemed to be building to that prior to his time in rehabilitation). Kenny Omega still has a huge babyface champion run left in him and obviously, Hangman will need a second run with the title to overcome his self-doubt and prove he can bounce back. Oh then there’s one of the greatest wrestlers of all time there with Bryan Danielson, the mega-over Adam Cole and others who could easily win the title.

Whichever way AEW goes in the future, I am hopeful it will be both financially and critically successful. While personally, I was rooting for Hangman to defeat Punk and continue the clear and direct storyline of the AEW world title leaving behind any need for previous stardom, AEW’s booking has shown that the top-level characters and storylines are handled with great care – and nothing has been given more care than the World Championship.

With this track record, I don’t have the worry that this was simply a hot shot title change without a carefully thought-out reason for happening and a plan going forward. MJF, Hangman, Wardlow, and even some who have not been mentioned yet (Darby Allin, Eddie Kingston) all have a history with Punk that would make defeating him for the title meaningful.

The way the upcoming Interim AEW World Championship turns out will then be very interesting. Will AEW have new blood win the upcoming Battle Royal and go on to win the title? Or will they go with more established wrestlers like Moxley, Danielson, or maybe a returning Omega? And then when the inevitable match with Punk comes along do they just have Punk win and continue on with his story as planned, or does the Interim Champion present a better opportunity moving forward.

Either way, I am greatly intrigued to see how the AEW World Championship will continue to develop and define both the wrestlers that hold it and the company it represents. 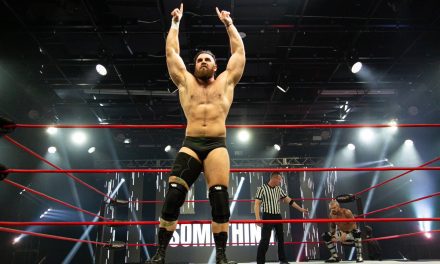 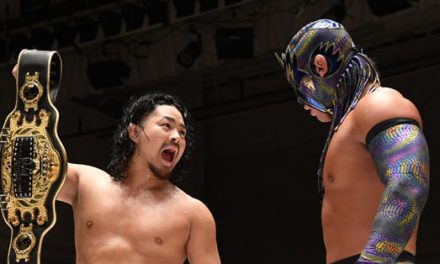 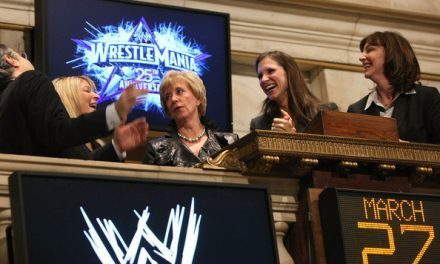