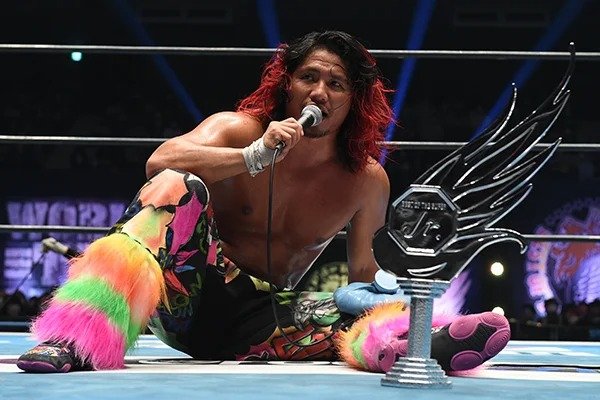 This was originally scheduled to be a non-title affair with Tomoaki Honma taking on IWGP United States Champion Juice Robinson. Unfortunately, Juice had to pull out of the show due to appendicitis, so hopefully, he’s able to make a full and speedy recovery. With Juice on the sidelines, Honma instead took on young lion Ryohei Oiwa, and picked up the victory in just under five minutes after hitting a diving Kokeshi. Nothing much to say about this one, as it was a pretty standard affair. While Oiwa would have his moments to shine (a couple of dropkicks, a half crab, a gutwrench that he had some trouble with), he ultimately came up short. I enjoy matches like this, because not only are you getting the young lion (Oiwa in this case) some experience in a singles environment, but you’re also giving a guy like Honma a win. Even though he’s pretty much at the bottom in terms of the heavyweight roster (his days of getting big matches are over), I do feel that guys like Honma should get singles wins like this over young lions every so often to at least keep that somewhat credible. **1/4

Here we have an eight-man tag consisting of Best Of The Super Juniors participants. I thought it was pretty cool to see one of the teams have champions from three different promotions (Impact, ROH, and GLEAT). The match itself lasted just under seven minutes, and ended when Alex Zayne pinned Clark Connors after hitting the Cinnamon Twist. Connors beat Zayne on the final night of block action, so this was Zayne getting that win back. This was a pretty entertaining bout while it lasted. It definitely could’ve been better had it been given more time, but it was still an enjoyable match to watch, with all eight participants getting moments to shine throughout. A fun match for sure. ***1/4

Now we’re getting into the portion of the undercard that has matches with potential implications for the future. In this case, Francesco Akira and TJP of the United Empire teamed together for the first time, and scored an impressive win over the current IWGP Junior Heavyweight Tag Team Champions. Wato would connect with a few dives, and Taguchi was his usual self, but it really felt like United Empire thoroughly dominated the champions en route to victory. I know the junior tag team division isn’t taken that seriously, though while I was watching this bout, I just kept thinking that Akira and TJP are so much better than these geeks. They really feel like a level above Taguchi and Wato. I really hope they capture the titles. They’d be such a breath of fresh air in a division that’s sorely needed it. **3/4

House Of Torture decided to get this one going straight away by attacking Zack Sabre Jr. and Yoshinobu Kanemaru during their entrance. This match was kept under five minutes, which is good news considering House Of Torture was involved. There really isn’t a ton to say about this one. It was mostly shenanigans, and ended with more shenanigans as House Of Torture’s attempt at using Kanemaru’s whiskey backfired. This led to Sabre forcing SHO to tap out, and it looks like we’ve got a NEVER Openweight Six-Man Tag Team Title bout on the horizon. The only question left to be answered is which Suzuki-gun member will join Sabre and Kanemaru. **

Of course, this contest is serving as buildup to the IWGP Heavyweight Tag Team Title bout at Dominion, where Bad Luck Fale and Chase Owens will defend against former champions Jeff Cobb and The Great O-Khan. This one broke down pretty early, and it didn’t take long for the Bullet Club team to isolate O-Khan. Cobb eventually tagged in and ran wild for a little bit, before Aaron Henare came in to go up against El Phantasmo. It was during this closing stretch that the biggest news coming out of this show, outside of the actual Best Of The Super Junior Finals, occurred. Ace Austin came down to distract Henare, and this allowed Phantasmo to take advantage, as he hit the CR2 to score the win. Austin then revealed Bullet Club ace cards, which officially signaled that he was now part of the group. While I’m sure being part of Bullet Club will be a big boost for Ace Austin’s career, I was a little disappointed to see New Japan go in this direction. Is that mainly because I was hoping for an Ace Austin/Alex Zayne tag team to help freshen up the junior tag team division? Maybe, but it is what it is. I’m sure Ace Austin and Chris Bey have some solid potential as a junior tag team too. The match itself was fine, though it was overshadowed by what happened at the finish. Even though it came off a distraction, it was notable to see El Phantasmo pin a heavyweight in Henare, especially with the rumors that he could be a potential entrant in the G1 Climax. **1/2

Before the second half of the show got started, we got an in-ring promo from the returning SANADA. Of course, SANADA won the IWGP United States Title back in February but had to vacate it several weeks later after suffering a fractured orbital bone. He essentially confirmed his return and that he’s going for the United States Title. Now as of this moment, the scheduled title match at Dominion is a Three-Way with Juice Robinson, SANADA, and Will Ospreay, but with Juice’s appendicitis, it remains to be seen whether he can participate.

I believe this was Tetsuya Naito’s first match back since taking time off to get some work done on his eyes (he had been experiencing double vision). This Six-Man Tag was mainly serving as a teaser for the upcoming rematch for the KOPW Title between Shingo Takagi and Taichi. At just under ten minutes, it was the longest undercard bout on the entire show, and it ended when Taka Michinoku, after being forced to eye poke himself by Shingo, got caught in Shingo’s Ground Cobra pin. This was a fine bout from start to finish, with all six guys involved getting moments to shine. Shingo and Taichi had some nice exchanges in the closing stretch (including a sumo standoff) before the finish. I guess the only other thing I’ll add is that I would be really interested to see a Naito vs. DOUKI singles match, based on their interactions here. Nothing much else to add, as we wouldn’t find out about the chosen stipulations for the KOPW rematch until after the show. ***

Before the match got started, Jay White took the mic and mentioned how both Juice Robinson and Karl Anderson weren’t able to be there. However, he still had a surprise for everyone, and it turned out to be KENTA, who was making his first appearance after suffering multiple injuries during his match with Hiroshi Tanahashi at Wrestle Kingdom back in January. The Eight-Man Tag itself was fine for what it was. Not as good as the match that came before it, but it served its purpose. There were some Gedo vs. Jado interactions, but the main story was Okada and White going at it. Much like Shingo and Taichi, they had some decent exchanges in the closing stretch, though Tama Tonga would be the one who ultimately got the pin after hitting the Gun Stun on Gedo. Okada and White then exchanged words after the match. A solid preview of their big match coming up. **3/4

Tatsumi Fujinami joined the Japanese Commentary Team for this one. Now as far as the match itself is concerned, I thought these two put on a great main event. It wasn’t the best bout of the tournament, and it wasn’t even the best bout these two have had against each other (their Best Of The Super Junior Final from two years ago that saw El Desperado take off his own mask was better than this), but it was still a pretty great match from start to finish. It did get off to a slow start for sure, though they managed to establish the main story in the first few minutes (with Desperado going after Hiromu’s leg), and the action in the second half was excellent, as you would expect. The big turning point occurred when, somehow, Hiromu managed to kick out after taking two straight Pinche Loco’s. Desperado was shocked that Hiromu had survived such an onslaught. He would go right back to working over the leg, but Hiromu fought back with a couple of superkicks, a lariat, and a destroyer. He even busted out the Timebomb 2, which Desperado kicked out of. After avoiding the Pinche Loco again, Hiromu was able to connect with two stunners and the original Timebomb before hitting Timebomb 2 to finally put El Desperado away. Hiromu Takahashi wins the Best Of The Super Juniors for the third time in a row, and the fourth time in five years.

Now the fact that Hiromu got the win here is what has a lot of people talking. I didn’t watch the show live, but when I did hear about it, I was definitely on the side of those that didn’t like the outcome. Hiromu had already won the tournament so many times before, and it just seemed like Desperado winning this tournament would do a lot more for him than it would for Hiromu. Plus, there’s definitely the feeling among some that Hiromu has grown incredibly stale as the main guy in the junior heavyweight division, much like KUSHIDA did years ago. For me, at least, it has nothing to do with Hiromu’s ability as a wrestler (he’s still one of the best out there), but you can only do the same song-and-dance of Hiromu having the junior title, losing it, winning Best Of The Super Juniors, and winning it back so many times before it gets old. I know a few people (Dave Meltzer chief among them) thought it was the right call because New Japan is trying to rebuild its live gate again by having its top stars (Okada on the heavyweight side and Hiromu on the junior heavyweight side) on top, but I don’t see the point in doing that when attendances are still restricted. I’m sure Hiromu will win the title back from Taiji Ishimori coming up in a few weeks, but where does the junior division go from there? Again, the match itself was very strong, though I’m not confident in the direction they decided to go in the end. I’m willing to see where it goes, but I feel we’re in for more of the same. ****1/4

In terms of match quality, this was a one-match show, though we knew that would be the case going in. The main event did deliver (though certainly debates can be had about who New Japan decided to go with as the winner), while the rest of the show did a decent job in helping to set up what’s coming at Dominion. It was a little surprising that we didn’t get any super notable angles on this show. We did get Ace Austin joining the Bullet Club which, while definitely noteworthy (especially if you’re a fan/follower of Impact), doesn’t have any ramifications on the upcoming New Japan matches or shows. I would recommend the eight-man tag with all of the Best of the Super Juniors leftovers if you want to watch a fun and quick match, but aside from that, the actual tournament final is the only thing you really need to see from this show.