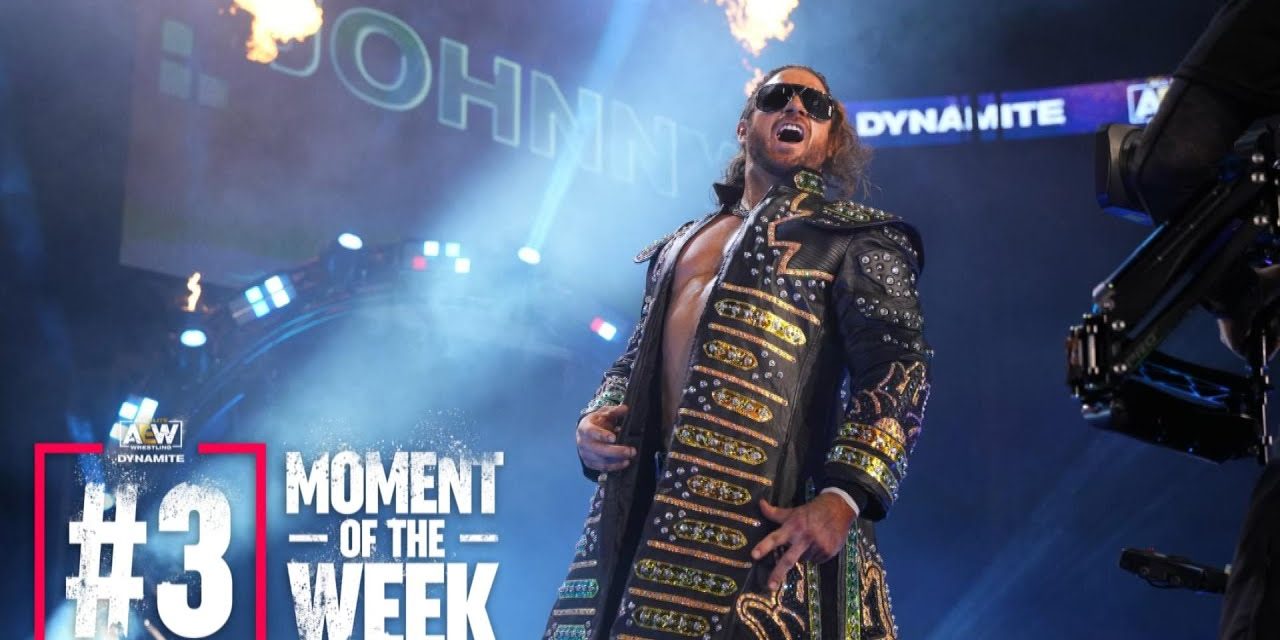 In case you didn’t know by now: Konosuke Takeshita is really, really good, and it’s great that a wider American audience is finding this out. His match with Adam Page was excellent, with the two of them showing off their athleticism while also working really stiff. There’s a very good chance this will end up as one of the ten best AEW TV matches on the year. Added on was CM Punk’s great commentary work (and sartorial choices), which really helped get over his feud with Page.

Kyle O’Reilly and Rey Fenix was also a great outing, as should have been expected given who was in it. They did a great job of building the drama for the finish around O’Reilly struggling for Fenix’s arm. This had the expected amazing spots that one would expect from these two.

The other great segment of the show was the MJF/Wardlow whipping segment. This worked really well as a contrast to the similar segment MJF had with Cody back in their feud. Cody’s selling was very dramatic – he was crying, Brandi was at ringside freaking out – and it worked really well for Cody’s character. Wardlow’s character is different, and it required a different tactic. Instead of extremely emotional selling, Wardlow didn’t sell – he smirked, he popped his pecs, he got in the face of a mouthy MJF. This was perfect for his character.

While it seemed to slightly go off the tracks once or twice and had a little cringe humor, the Chris Jericho/William Regal face off was extremely effective. It set up their pay-per-view match – while shutting down any rumors of a Stadium Stampede style match as only Jon Moxley could do – and also sowed doubt as to what would happen with the Blackpool Combat Club and their short term allies of Eddie Kingston and Proud & Powerful, as Jericho played off the previous feuds the team members had previously in AEW. This is a great example of how AEW easily makes its history work in an unobtrusive way – sure, you may have missed the Kingston/Danielson feud or the further back Moxley and Santana “Eye for an Eye” match (the good one, as Jericho so helpfully pointed out), but it was explained to you in the dialogue. This could set up some really fun matches after the next PPV depending on how stories go.

Jade Cargill is a star, and bailed out a pretty meh Kris Statlander & Red Velvet Owen promo.. She has a ways to go in the ring but she’s been a boon for the AEW women’s division.

Finally, Tony Schiavone’s the best at expressing outrage at a heel’s actions. His performance in the last few seconds of the show after Sting was Pillmanized was top tier stuff.

So, let’s talk about Samoa Joe vs. (sigh) Johnny Elite. There are two things I want to tackle here.

One is the problem that the former John Morrison was the debuting Joker. This probably would have been fine in a vacuum, but this isn’t a vacuum, it’s a time period with a decent number of hot free agents and wrestlers from partner promotions that the Joker could have been. Johnny Gargano, Cesaro, and Hijo del Vikingo were just a few of the names bouncing around. It just felt like a real flat surprise.

The other thing was the match itself. It wasn’t an outright disaster, but it was a match that looked pretty rough at points. It seemed like Joe and Johnny struggled to get on the same page, especially early on, and they never really meshed. You’d certainly hope for more from this pairing.

The other segment to spend time on here was the Serena Deeb promo. I wouldn’t say this was outright bad, but it probably went a little long and Deeb’s delivery was flawed. She stumbled sometimes, and the dynamic of her berating an active male wrestler didn’t hit like her bullying announcer Tony Schiavone.

I hope that The Workhorsemen someday get a chance to shine more. They’re a very talented team that have shown off their skills on the indies for awhile now and look good whenever they do a job on TV.

8/10. I wouldn’t really say there was any outright bad matches on this show, but there were several nonessential ones. But the great MJF/Wardlow and pretty good Regal/Jericho segments helped lift this up another notch.

Performer of the Night

Konosuke Takeshita. He looked pretty good in the Jay Lethal match on Rampage, but the Page match was at a whole new level and Konosuke really knocked it out of the park.